Taking time to appreciate the view

Absurd Up. KhakiKid is the brainchild of twenty-two-year-old rapper, Abdu Huss. Based in Crumlin, (where he shares a room with his two younger brothers) he’s far from camouflaged.

One of a number of emerging artists from Ireland’s alternative hip-hop scene, he produces sun-kissed harmonies reminiscent of Pharell Williams or the late great Mac Miller, as well as stomping braggadocio a-la STFU.

KhakiKid is blessed with more tricks than a kid on a shortboard and captures the rugged free-form of inner-city Dublin. His rhymes are as quirky as his live shows are animated. Having conquered The Sound House in autumn, Huss sets his sights on The Grand Social in February… that is if he can escape his bathroom first.

“I got a harmonica for Christmas from my girlfriend. She has such good intuition. [My brothers] were like, ‘shut the fuck up with that'”, he laughs. Sadly, it was also forbidden by his mother and ironically, his girlfriend’s family. “I just sat there for hours watching YouTube tutorials… relegated to my bathroom”. 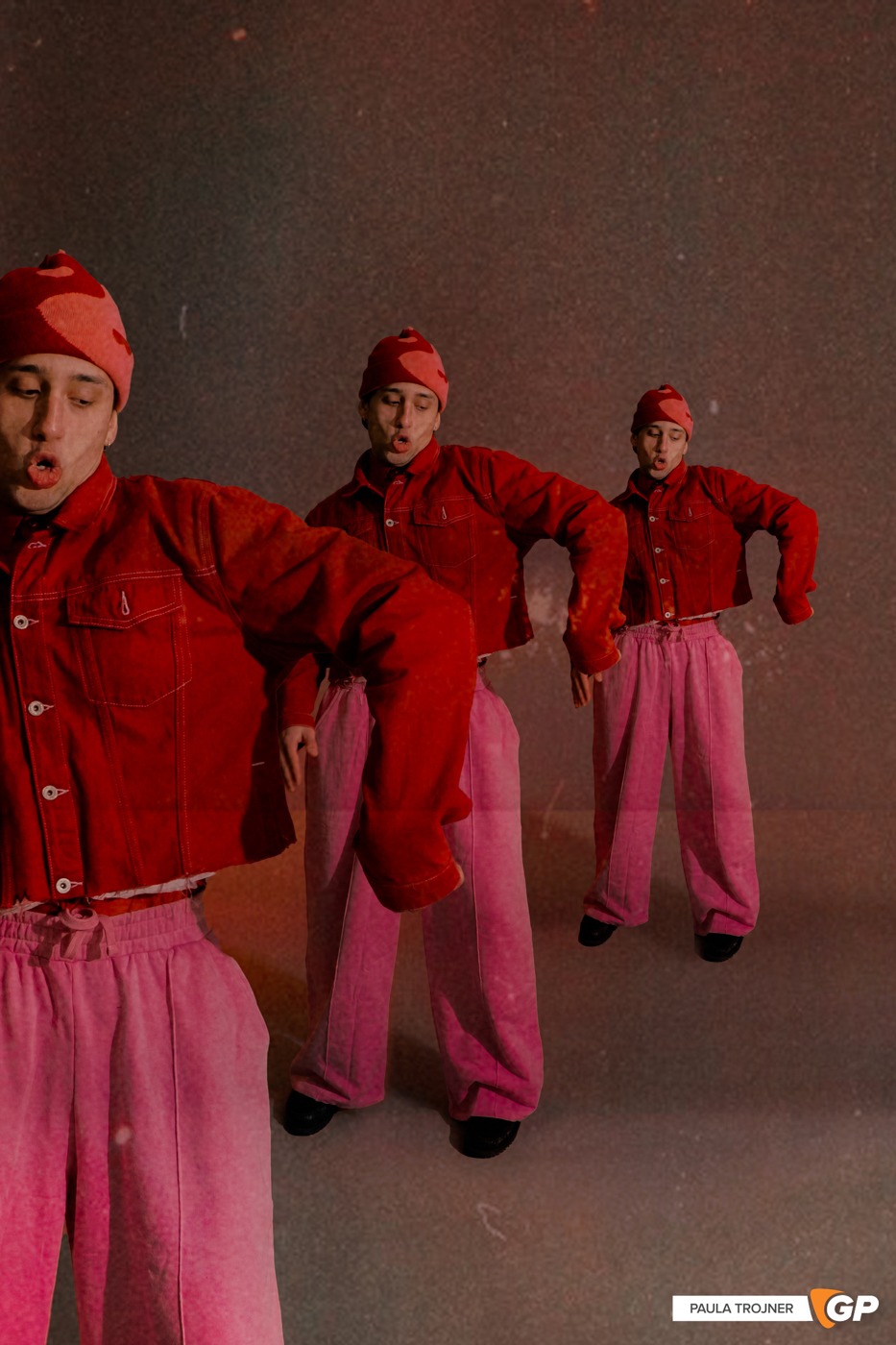 Talk about going underground. Perhaps poor Abdu will discover a new kind of chamber music. “I’ve learned the harmonica section in Piano Man”, he states. “I’m pretty proud about that”.

“We’re gonna have a saxophone player, trumpets… My mates and I were planning on something theatrical, get the whole crowd involved,” Huss enthuses of his upcoming show and is eager to speak about one of his favourite Irish hip hop outfits Bricknasty, who now act as his backing band at gigs.

“It was so different to anything I’d heard released from anyone in Ireland“, he says referring to their debut single Father. “We ended up meeting up and making a song together,” he explains alluding to the aforementioned Breakfast on Pluto.

Set to a snappy groove, KhakiKid sounds goofy in the most infectious way possible. Flipping misogyny on its head and turning the joke in on himself, his wordplay is evocative. “RIP to DOOM, the best of all time bro / My girl text me all caps when am I home?/ I text her ass back, ‘Can’t talk, my phone broke,’” he drawls on Breakfast on Pluto

Growing up in a large family, Abdu marvels in the incessant slagging, viewing it as an opportunity to generate witty lyrics. It’s more fun to slag himself, beating his siblings to the punch. “You get put in your place,” if you act above your station.

Otherwise. KhakiKid embraces surreal humour and feels that it’s somewhat unique to Ireland. “A lot of my mates would say, ‘your Ma models for Sports Direct’ or ‘your Da has a Gola tattoo'”, he recalls. “Or ‘your Da sells Avon'”.

Why is that even a good joke?” he ponders. “All the surface level stuff is so boring. When I was twelve, my mate called me a ‘camel jockey’. I was like, ‘that’s class!'”.

"It's my world. It's not something I can escape"

KhakiKid is a sponge when it comes to ethnomusicology. He speaks at length about Jannis Stürtz. “A lot of synth instruments made their way [to the Arab countries] in the ’70s and ’80s and they just started making funk music. He made a collection of songs from that era. I’m thinking of calling my next project ‘Habibi Funk’ and sampling that”.

Can we expect any Arabic? “I said ‘assalamualaikum’ (‘peace be upon you’) on Cozy. I was proud of that. I don’t think I’ve heard many rappers rhyme ‘assalamualaikum’ on a song.” Don’t mistake Cozy for being languorous from the title though. Here, KhakiKid is as forthright and urgent as they come, seated in his rightful place and “coming for the bacon”.

He draws influence from from his favourite comedians – Limmie, Eric Andre, Bernie Mack, Lil Duval, Bill Burr and Rickie Gervais to name a few. Abdu is an oracle of knowledge, conversational and good-humoured, taking his time with each sentence. This is reflected in his songwriting.

We chat about West African music briefly. “During the ’70s, Germany were importing synths from America. A boat of instruments washed up on the Cape Verde Islands so there were a lot of people from these villages there that ended up getting these instruments. That actually influenced a lot of the music of that era”.

As well as tunes, Huss adores basketball and skating. He plied his trade of the latter at Weaver Park on Cork Street. “Even though there’s a lot of gentrification around there, a load of student accommodation, you still meet so many people from that area”, he tells us highlighting the importance of preserving dedicated spaces for street sport. He believes them to be redemptive and correlates strong urban design with inclusivity and the upkeep of heritage.

Weaver’s intergenerationality captures Abdu the most. “It’s open, so if you’re walking through the playground, the skate park’s going to be there. These kids see you skating and then eventually they start asking for shots of your board… so much so that the lads were like, ‘we’ll give them an old setup. There are kids there that would make a show of me!”, he chuckles.

“It could be 10 o’clock and they’re still skating whereas I know I was fucking around a lot at that age. That’s one of the reasons why I love basketball as well. I stopped being a muppet when I started playing”, he reflects.

“You talk to some of these kids and they have it so rough. Some of them don’t even want to go home. It could be 11 o’clock at night… they’re still running around then you leave and they haven’t even left yet. It’s great for them to have without getting up to trouble”.

Huss extends this egalitarian philosophy into his upcoming ‘Elevator Music’ project. Here, he delves into his creative process a bit more. “The visuals are such an important aspect to it. I wanna build the world of KhakiKid more. They always explain the music so well to me. I’ve always been such a visual person”, he elucidates.

"I just sat there for hours watching YouTube tutorials... relegated to my bathroom"

“I could be making a song and the video is already in my head”, he continues. “It allows me to bring my friends into what I do as well. That means so much to me, being able to create with people I know”. Huss sums up, “It’s me exploring the sounds I’ve been working on recently even more. It’s definitely going to be absurd, just more absurdity throughout the whole thing”.

The inspiration for the cover art “was from a film in the 2000s. It had a load of skaters and punks in it then your typical businessmen with briefcases too”. Abdu reckons it was either Elf or an old Rémi Gaillard compilation. “It took months for it to click. ‘Oh, ‘Elevator Music’. The visual came first”.

KhakiKid demonstrates a strong DIY ethos and believes that attempting to replicate something blockbuster on a low budget is counterproductive. His videos exemplify raw authenticity.

“Breakfast on Pluto I recorded and edited myself”, he explains. “I sellotaped a mop to my bike, then sellotaped my friend’s GoPro to it then just cycled around places that I would be at. I don’t intentionally make it 100% about Dublin or anything like that. It’s my world. It’s not something I can escape”.

While the pandemic might have made our built environments a bit more claustrophobic, Huss prefers to view his hometown as an artful playground, an escape unto itself. “You know it’s Dublin but to a lot of Americans and British people, they can’t pinpoint where it is”… unless you’re really good at Geoguessr.

Abdu is especially fond of the Liberties and specifically its horse culture. In fact, he decided to incorporate one into the video for Shlumped Up, which he created with longtime friends, Iarla and Finn McKeon.

“It was nothing like I’d expected. You have this stigma of people in the inner-city having horses. It was older than [the owner] first of all”, he tells us.

“Then secondly, the horse just meant so much to him. They took the utmost care of it. It was such a well-trained horse. He didn’t even have a lead on it. When we walked down the road to a new location, the horse walked beside us. When he stopped, the horse stopped. It was like he had a nice docile dog”.

Shlumped Up encompasses all the mischievousness and soulful bliss of Odd Future. It also contains a nod to Andrew Callaghan’s All Gas, No Brakes series. Much like the two, Abdu clearly shares a camaraderie with his mates through his art. And much like the two, he exhibits enough singularity and seriousness to his craft to keep going from strength to strength.

KhakiKid has the fastest hands in the west but he’s taking his time to appreciate the view.