Over the neo-soul horizon

Amelia DeCarteret, trading as DeCarteret, has already made waves with her hypnotic blend of neo-soul, jazz and R&B.

Her singles to date, Sunday 21 (with Bricknasty and Hayden J. Barlow) and LuvSeat (with Squid Ethics), have offered a glimpse of the great things we can expect from the young lady.

We caught up with the singer-songwriter over Skype one Saturday morning, who told us that music was a big part of her upbringing in Co. Clare.

“My mother’s a choir instructor and she has been since I was born” she recalls, adding “She used to bring me along to her sessions and carry me in a sling when she taught. She also taught me how to play guitar when I was about eight years old, so it stemmed from there.”

It wasn’t until she moved to Dublin to attend BIMM that DeCarteret would start to write her own music. The move, as she puts it, was necessary due to the restrictive music scene in her home county.

“There’s a lot of people who would put covers on social media but no one’s really writing their own stuff. I would create stuff and flip covers but there was no one around me writing at all and I just didn’t really know how or where to start.”

Her tenure at BIMM would ultimately be short-lived. “I didn’t really feel it was necessary to do another three years. I found my band so I’m like super happy. I basically got out of it what I wanted and then I just decided to leave” she says.

That band, fellow BIMM alumni, the Ballymun based Bricknasty, would prove to be a vital component of DeCarteret’s success to date.

“They formed within a couple of months of joining the college.” explains DeCarteret, “and because I worked pretty closely with them anyway, I just asked them to play my live gigs and then we just solidified it probably six months after that.

They’re super integral [to my sound]. The frontman, (Fatboy), plays guitar on all of my tracks and we write a lot together so he’s integral to the music. Tadhg Griffin does all of my piano, he also does strings for me, Dara Abdurahman on bass, there’s no track he hasn’t played on yet.”

It was her performance during a Bricknasty set at The Sugar Club that provided DeCarteret with her “eureka” moment.

“…the energy in the room was absolutely unreal. We were doing one of my tracks and I just dived off the stage into the crowd and I was like ‘I want to be doing this for the rest of my life’. It was so much fun.”

That working relationship would carry into DeCarteret’s recorded output. Her debut single, Sunday 21, was released via edbl recordings in October 2020 and DeCarteret has fond memories of its creation.

“Me and the frontman of Bricknasty, we made a little demo in his room, made the drums out of pots and pans and gravy shakers and tracked the guitar through this shitty mic that I have.

“I wanted to start releasing music and I needed to find a song that I was happy with to push myself to begin that journey because I just hadn’t bitten the bullet yet. So I left his house and on the way home, listened [to the demo] and started writing the verse and the chorus.

We were trying to find a singer to take the second verse, because we really wanted someone else to feature on it, we found Hayden in the UK and he’s just an insane vocalist. Then we just pieced it together, but I really didn’t have a clue what I was doing at that point…

“I love that song, it’s very weird. The production style really comes from Bricknasty, the weird sounds in it, that’s totally his thing. That [woozy quality] I have in my music as well is totally inspired [by] them.”

The following February, the singer would release LuvSeat with the enigmatic Irish-based producer Squid Ethics, who had himself amassed some 2 million streams for his track Alone. The track gave an even greater insight into the complexity of DeCarteret’s lyrical content, exploring themes around sex, grief and empty words.

“Talking about somebody, the way they carry on, the language that they use and talking about how it isn’t tasteful. You know when you say ‘that gives me the ick’? That was happening to me at that point but really caring about that person at the same time so I was saying: ‘you have a place here but go rinse your mouth out with soap.’

Also, my dad passed away a year before that but that’s where the bridge, the ending lines ‘my daddy’s gone’ so that was a massive inspiration and continues to be such a huge place to pull from in my music that I’m writing now as well.”

Of the collaboration with Squid Ethics, DeCarteret said. “He found me on social media, We threw different ideas back and forth for a couple of weeks until I wrote basically the whole song on my piano in my room and sent him a small demo and stems for the keys and he came back with the beat, which I loved, ‘cos I was really into lo-fi beats at that point so it was kind of perfect.

“We’ve never met in person so we just went back and forth through email, sending pages of notes, having the odd Zoom call to put final touches on it but it was all online which we had to do at that point because of quarantine and the pandemic.”

This remote way of working has been DeCarteret’s bread and butter since the inception of the solo act. On artistry during social restrictions, she muses.

“It’s interesting because I started my career in lockdown so I hadn’t really experienced the live industry – I had played gigs but not as DeCarteret at all so I didn’t know any different at that point so sending pages of notes back and forth online was the only way that it was gonna happen and to be honest I still do that even though I am collaborating with people who are local to me just because it’s easier, it’s more straightforward I think.

“It was great in that little couple of months of freedom that we had absolutely, the live industry just popped up again. I played my first gig as DeCarteret in the Grand Social. I always jump up on Bricknasty’s sets and Tadhg Griffin, I’ll sometimes get up on his sets and stuff which is always fun but I hadn’t actually done a full forty minute set. So I played in the Grand Social alongside Malaki and Lucy McWilliams. It was great, it was so much fun.

“Since then, I’ve just tried to get as many gigs as I could, just to get the experience in ‘cos when I do release new music, I want to be comfortable live. I went down to Other Voices in Dingle, which was unreal. I did a good few support acts and stuff for Carrie Baxter. I supported Modernlove. as well I love that Workman’s new venue. It’s really cosy.”

Clearly undeterred by the social, physical, mental and emotional restrictions, imposed by lockdown, DeCarteret has been actively working on her debut EP, set for release sometime in early 2022.

“I was trying to release it last year but it was just way too rushed. I really wanted to wait so I’ve been working a lot more now and the first single will be released pretty soon anyway. It’s gonna be featuring Bricknasty and also the Irish rapper KhakiKid (fellow Plec Picks 2022) and working on a few others but nothing’s set in stone yet.”

“It’s been really hard work getting it together. I’m super passionate about visuals as well so we’re working on a massive music video that we’re shooting at the end of this month. I’m doing it with Willis Kennedy, he’s great.

I’m making all my own outfits and hand sewing boots and crazy stuff, making headpieces, making the set. I’m going shooting two days in Galway and then going to a place in Clare near my house, I love the fact that we’re gonna shoot half of it in where I’m from and then another music video for one of the tracks afterwards. I’m really excited. I’m putting the finishing touches on it now. I’m just really happy that the community that I have around me are all on the project.”

“The algorithm just favours constant releases, it's really hard because I don't write that quickly."

The importance of the visual aspect of her music is evident from the ‘80s streetwear-heavy music video for LuvSeat. Delving further into this is something the singer plans do to in the future.

“Music videos were my favourite thing to watch as a kid and if I wasn’t in the music industry, I’d definitely be in the film industry, 100%. Coming from a really creative family, I usually draw from the lyrics that I write, come up with some kind of subtle metaphor that I can push across. I didn’t really do this for the LuvSeat video because our budget was really small.

For the LuvSeat video, it was so funny, we just had about 20 friends over to my house and we all set up the kitchen with loads of blankets and sheets and got everyone dressed up. We have so much footage from that day because it wasn’t planned at all, everyone just jumped on a phone or a camera, half of it is shot on an iPhone.

My friend, Rosie Fairchild, she’s a photographer and we went down to Clare into the forest to shoot the second part because I just wanted something to contrast. I draw from my lyrics and usually I would pick some kind of colour scheme because I think that’s really important, go online and research a lot on the concept that I’m trying to push across and it’ll just form in my brain from there.”

With such attention to detail in all aspects of her presentation as an artist already in her sights, it seems DeCarteret is setting herself up for a busy year. We briefly discussed the increasing pressure on artists to be prolific during the digital age, one that the singer knows all too well.

“The algorithm just favours constant releases, it’s really hard because I don’t write that quickly. It takes me a really long time to fully form the concept I have in my head and then deliver that, so I just haven’t released because I’m like: ‘you know what? It’s way more important for me to deliver something that’s authentic and good quality rather than just put out a song every six weeks and just hope for the best’ because I think it’ll favour me in the long run.” 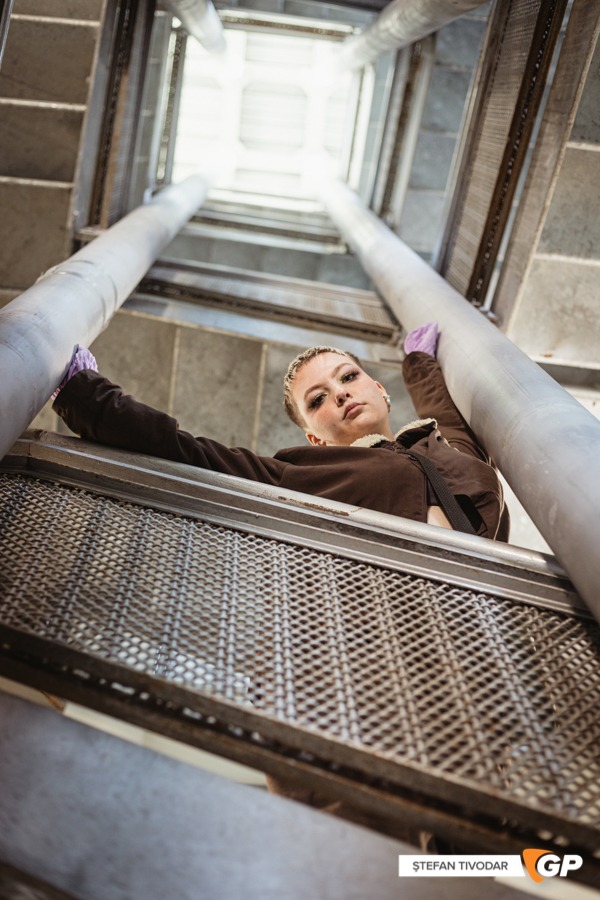