In Search of Euphoria: The classically trained musician who just wants to make people dance

The DJ booth is about as far away from the stuffy world of classical music as you can possibly get, but the draw of the drop and a crowd free to express their emotions in any way they want was too much to resist for child prodigy Daniel Blume.

The DJ and songwriter, who has over 140 million streams on Spotify alone to his name, started his musical career as a classical guitarist. Aged just eight, he won a scholarship to the prestigious Yehudi Menuhin School in Surrey, one of the most exclusive music schools in Europe. Funding was provided by none other than the Rolling Stones who had encouraged the school to introduce guitar to its curriculum.

“I never thought I’d get in, let alone anything else that happened, but fast forward a few months and they sent us a letter that said ‘we’d love to have you join the school and the Rolling Stones would love to give you a scholarship’ and I was like ‘what the heck is going on?’.”

While the Rolling Stones left Daniel to get on with his studies, another famous face from British rock royalty, guitarist Jeff Beck, began to take notice of his progress.

“He came to a lot of concerts,” explains Blume, still slightly in disbelief. “He would stand out with his dyed, jet-black hair and he’d be the only one who would stand up and clap at the end.” 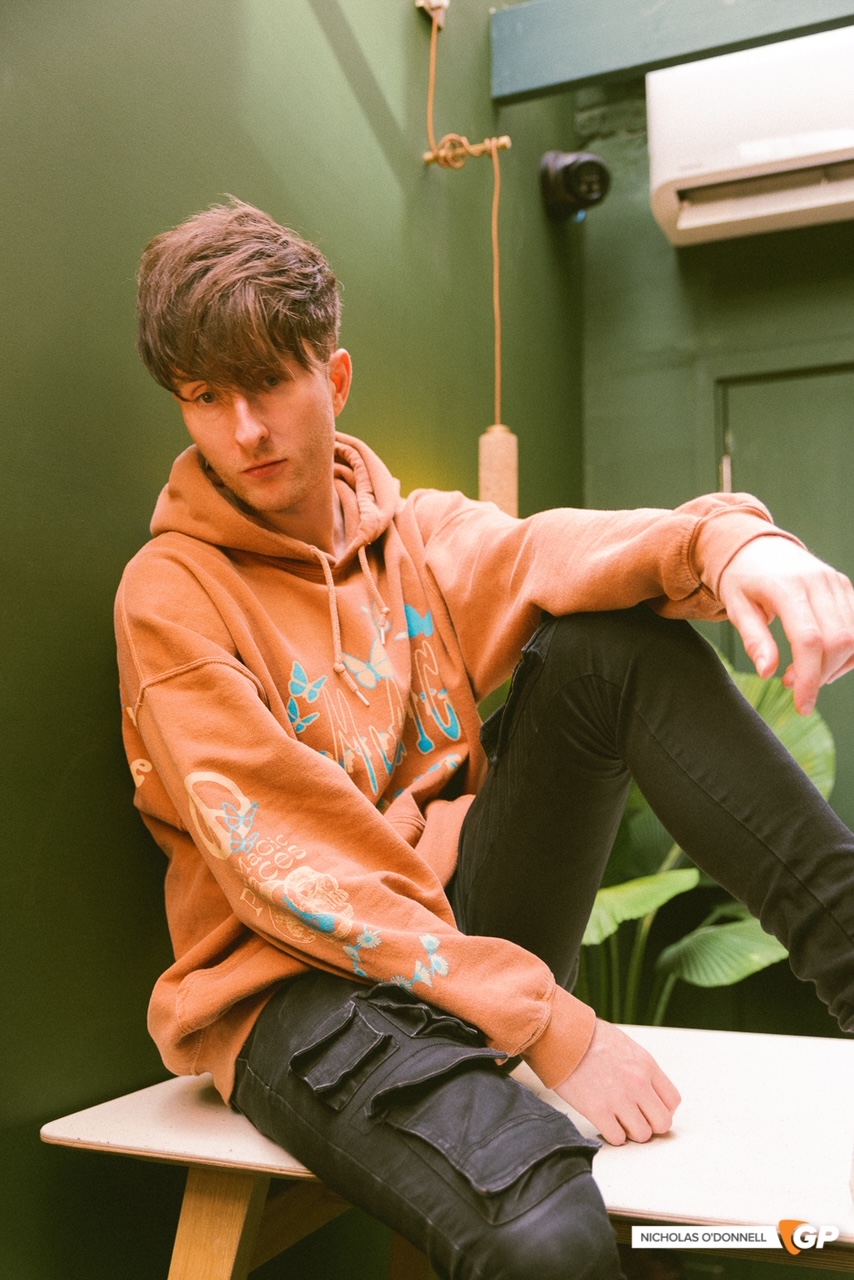 Having attracted the attention of several noteworthy players, a career in the upper echelons of the classical guitar world seemed to be the young Irishman’s destiny but rather than a future playing music from centuries past, Blume wanted to focus on writing his own music.

“I decided from quite early on that composing and writing my own music and then, evidently, pop and dance music was what I wanted to do.”

Aged 15, Daniel Blume entered the BBC Young Composer of the year competition on a whim.

“It was just sort of a spur of the moment thing. I didn’t even know there was a competition, another guy from school was entering into it and I was just like, sure look, I’ll just give this a go. I had a piece written that sort of fitted the brief anyway and I just sent it in thinking nothing of it.”

True to form, Daniel Blume won the competition and his family had to cut their summer holidays short to return home for the performance. This cemented Blume’s belief that his future as a composer was a tangible possibility. However, Blume would soon be torn about his future.

“Up until this time I’d wanted to be a composer, my dream was to go to New York and go to Juilliard and do composition but at the same time I won this competition, I saw Martin Garrix and the Chainsmokers and I just became addicted to what these people were doing.”

“My mind was swayed straight away; I knew what I wanted to do. Obviously my teachers and my parents wanted to make sure I was confident in the choice I was making and not throwing away what I’d worked towards.”

Having spent 10 years studying at the Yehudi Menuhin School, his guitar teacher paid him the ultimate compliment when it came time to graduate.

“He said I was the best guitarist ever not to become a guitarist,” Blume tells us laughing with pride.

That is not to say that it was an easy decision for people around Blume to accept. “There were lots of conversations, lots of convincing was needed, lots of believe and faith”.

“I think one of the things that really swayed them was that I signed a deal with Spinnin’ Records when I was 17. I was still in the school, so it meant when I graduated, everyone had some faith that there was a career path.”

So how exactly does a novice teenage DJ in Surrey wind up with a record deal with Dutch powerhouse dance label Spinnin’ Records?

“As this classical music kid in London, I was very disconnected from that [scene] so I was on Instagram and Facebook trying to connect with as many people as I could and work and collaborate with any DJ or producers I could that were affiliated with Spinnin’ and as time went on they were starting to hear my name.”

However, Daniel Blume is quick to admit that the switch from classical to dance was far from seamless.

“It was difficult at first. I didn’t even have a laptop and I was so bad with technology, I had never done anything like the technical side of producing music before. I got a laptop and was trawling through YouTube everyday trying to absorb as much knowledge as possible.”

“I slid into a lot of DMs,” he says laughing. “I would say one of the most valuable things I did was trying to collaborate with as many people as possible. The more you see people finish songs, the less unreachable it seems and that can be really important for new artists because often, one of the biggest challenges is not writing a song or working on a song but getting it 100% done. It can be really hard to get it over the line.”

Daniel Blume’s uninhibited approach to social media certainly paid dividends providing him with his biggest hit to date, Who’s Got Your Love, his wildly successful collaboration with Cheat Codes.

“I was spamming everyone. Truly, I would recommend to all new artists that there is no shame in it if you feel that you have something to offer. Everyone is looking for the new thing, they are not judging you by your name. If you send them a product that they can see potential in, they don’t care if you’re famous or no one, they are looking for cool songs and cool ideas.”

“I was @-ing Cheat Codes being like, ‘I’d love to send you some music.’ They had just released their song Sex, which was about to blow up but hadn’t become a hit yet. One of them followed me back and I was able to DM them the song and they invited me on tour with them and Steve Aoki. We finished the song and premiered it in venues all around the UK which was insane. Out of nowhere, it just happened.”

And Daniel Blume relished the change of pace between live shows in the classical and dance realms.

“It was definitely a big change, but it was one of the things that always held me back with classical music,” he says, adding “I love seeing a big reaction from people and I feel music should be enjoyed and celebrated. People should be able to react to it, scream and laugh and cry and sing along.

Daniel Blume capitalised on the success of Who’s Got Your Love with a series of successful solo singles such as Nights Like This and Heartbreaker before landing another international smash hit collaboration with dance music superstar Alok reimagining the 2006 dance classic Rapture.

”Maybe no one was going near it for a reason,” he reflects. “It took a lot of reimagining and a lot of figuring out how I was going to do it because obviously it’s a female voice, so I had to figure out the right key and make it work for me.

“I don’t know how it happened, but we got in contact with Alok’s team and it all got really exciting. I think he was the No. 3 DJ in the world at the time. It was just mad to get to work with him and see the impact of a release on his scale. On the first day it was doing a thousand streams every half-a minute, it was insane.”

Daniel Blume doesn’t like to focus on the stats though in case it sucks the joy out of proceedings and is laser focused on the next batch of tracks.

“Ultimately, I make music for myself. I’m not doing it for figures. I want to put out music that I love that can be a positive force in people lives and help them through experiences they may have shared with me.”

“It was a really exciting year with the Alok thing going on, but I’ve dipped away from the spotlight because I’ve been in the studio experimenting, developing and reworking my sound and the type of music I want to put out.”

“I bought a load of synthesizers and gear. I really wanted to take my music forward and do something different. I’ve always wanted to incorporate me singing in a song and follow it up with a big catchy synthline, have the juxtaposition of that.”

“That was the type of dance music that I fell in love with and it the aim has always been figuring out how to do that in my own way that’s unique, that isn’t just creating a nostalgic feeling of how it’s been done before. And that’s been a challenge.”

“I’ve been locked in working on that, but now I have a batch of 8 to 12 songs in various degrees of being finished. It’s gonna be a crazy year, I’m gonna be pumping out music and I’m so excited.”

"My dream was to go to New York and go to Juilliard and do composition, but at the same time I won this competition I saw Martin Garrix and The Chainsmokers and I just became addicted to what these people were doing.”

Daniel Blume’s most recent single, Better, is the last song from his old working style, but one he couldn’t resist putting out before introducing his new sound.

“It’s a song that’s really personal to me. I’ve been playing it in my live show for ages. For me, it’s the best one live, there’s this big 8-bar build-up were I’d always get the crowd to sit down before the second drop, that was always crazy.”

“I think the main thing that always got me excited about this song was it was unreleased so nobody in the crowd had heard it before, but the way it works is it’s quite catchy as you’re listening to it so by the time the chorus comes the second time the whole crowd would be singing along to this song that they had never heard and I just had goosebumps when that happened. I’ve been buzzing to put it out ever since.”

“There’s gonna be a single every 6-8 weeks, possibly culminating in an EP at some point,” he says excitedly. “We’re introducing this new sound starting a bit more for the clubs and gradually getting more and more towards the radio singles for the summer, so expect the big bangers by the summer.”