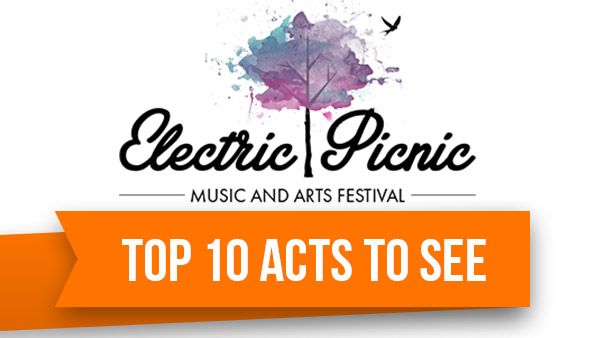 Well this is it, the big one. Electric Picnic. There’s less than a week to go before Ireland’s final and biggest summer festival kicks off. We couldn’t be more excited (and we’re not the only ones).

The lineup is definitely a more eclectic mix than last year, with a hugely diverse selection of Irish and international acts. Indeed picking just 10 must-sees is a bit of a challenge. The welcome reunions of Outcast and Postishead at the top of the bill was enough to convince more than few people that the price of the tickets were worth, but a quick scan down the lineup list reveals plenty of hidden gems.

Aside from the big international names there is a whole host of up coming Irish talent — including some of our Plec Picks for 2014: Wyvern Lingo,  Orla Gartland, Raglans, Tvvins, The Academic and I Have A Tribe, all of which we cannot recommend highly enough.

Indeed picking just 10 acts may be a bit of an impossible task, but that didn’t stop us from trying. The following acts are the one that we really encourage all picnic goers not to miss:

What To Expect: It’s no surprise that St Vincent is one of the few international names returning from last year (albeit this time without David Byrne). Her set with the former Taking Head was one of the real highlights of EP 2013 for a lot of people (or reviewers included) so it’ll be interesting to see how St Vincent manages on our own. With a new album in tow that ranks among the best things she’s ever done, our confidence is high that she’ll be just as talked about this year.

Set Highlight: The mesmerising electronic sounds St Vincent can wring out of her guitar

What To Expect: Contemporary soul merchants Jungle seemed to burst form nowhere this year with a début album that made all kinds of funky waves and a Glastonbury set that had reviewers raving. Although primarily composed of a mysterious duo known as J and T, you can expect a whole band of backing and musicians and singers to accompany Jungle to take to the stage with their fresh take on beautiful soul rhythms that never get old.

Set Highlight: That moment when you realise that this music is impossible not to dance to

What To Expect: Just when you thought it was possible to write Sinéad off, she comes along with a rousing new album and an absolute belter of a new single in the form of Take Me To Church that serves as a reminder of just how good a voice she actually has. Expect those sweeping, soulful vocals to make a big splash at EP as Sinéad tears through a much underrated but rich and varied back catalogue of tunes.

Set Highlight: Those shivers down you spine when Sinéad imbues a single note with the kind of emotional resonance that few artists are truly capable of.

What To Expect: You wait years for a two-piece alt-rock successor to the White Stripes to come along, but then several come along at once. Assaulting the eardrums alongside the likes of Deap Vally and Royal Blood are the Darbyshire duo-Drenge, picking up somewhere around where grunge left off for some seriously loud and heavy noise making. There are plenty of bands on the EP lineup to dance to, but Drenge are one of the few that are likely to inspire so legitimate headbanging and moshing.

Set Highlight: Face-melting riffs and pummelling drums blasting the hangover from the night before into oblivion

What To Expect: With trip-hop genre founders Portishead at the top of the bill, it’s good to be reminded of their enduring influence for contemporary acts. Without Portishead, there’d probably be no-one like London Grammar. With their chilled, atmospheric electro-pop sound and plaintive, angelic vocals, London Grammar are likely to provide a moment of serenity in an otherwise manic weekend.

What To Expect: Foals’ two sold out gigs in the Olympia were to of the sweatiest and most talked about gigs of the 2014. Let’s face it, Foals are tight as hell and their live show keeps the audience on their toes. Their long set is a mixture of old favourites and new tunes from their critically acclaimed third album Holy Fire. It will be interesting to see how their show from the tour will translate to a festival slot. Either way we’re looking forward to seeing Yannis jump around the place and we’re wondering if they will make it rain lasers at Picnic.

Set Highlight: A light show and performance that are perfectly in sync. Funky bass lines, epic drums and much much more.

What To Expect: Jenny Lewis, former lead singer of Californian indie rock darlings Rilo Kiley, has made a bold, triumphant return with her third solo album. The offering was well worth the wait and the record is jam packed with Jenny’s witticisms and notes on relationships turned sour. While she may be petite, Jenny has a big, commanding stage presence and her return to Irish waters is not to be missed.

Set Highlight: We’re looking to hearing foot stomping new tunes Head Under Water, One of the Guys and She’s Not Me live with a full band.

What To Expect: A set filled to the brim with classics, belted out by the icon that is Debbie Harry. Don your dancing shoes and get ready to bop away to forty years worth of hits. Sunday Girl? Call me? Heart of Glass? Do we really need to say much more? We’ll see you up the front.

Set Highlight: We’re expecting the whole set to be a life changing experience.

What To Expect: After a year away, the Trinity Orchestra is making their welcome return to the festival circuit  with a brand new set. That’s right, this year the orchestra will tackle the work of Damon Albarn’s Gorillaz. The Trinity Orchestra is known for showcasing some of Ireland’s best up an coming musicians over the years; who could forget the grown men fighting back the tears when Karen Cowley belted out Great Gig in the Sky to a packed main stage, or Robbie Kitt singing Daft Punk’s Too Long? There’s more to this talented bunch than the vocalists though and we’re very excited to hear the new orchestral take on the Gorillaz  unique blend of “virtual hip hop”.

Set Highlight: There will be rappers and an Orchestra. Go grab some falafel and nurse your hangover down at the main stage on Saturday morning to the sweet sounds of  Melancholy Hill.

What To Expect: Speaking to us recently, Le Galaxie could barely contain their excitement at their Laser Disco DJ set. We’re not exactly sure what that means either — but that’s probably where you’ll find us on Saturday night. It may be a DJ set, but you can expect that unique Le Galaxie buzz to be present nonetheless.

What It Will Sound Like: We’ve no idea! But here’s a tune to get you in the right mood:

But like we said, these 10 acts represent only a fraction of what Electric Picnic 2014 has to offer. For a fuller primer, check out our EP playlist below.