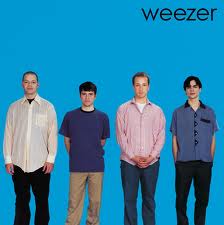 Welcome to the latest edition of ‘Golden Vault’, where we delve into the annals of music to bring you a classic album. You’ll know some like the back of your hand and nothing of others. We hope to get you reacquainted with old friends and create new favourites. The album to be taken out of the Golden Vault for reappraisal this week is ‘Weezer (Blue Album)’ by LA nerds, Weezer.

In the wake of Kurt Cobain’s passing, the music news of spring 1994 was a sea of plaid and messy mascara. Magazines and TV reports were falling over themselves to pay tribute to this ‘lost hero’ and to some it seemed like music was finished. On the other side of the country however, tucked away in leafy Greenwich Studio, a quartet of nerds who often found it hard to book gigs because they “weren’t grunge” were just beginning their rock story. Putting the finishing touches to their first LP, River Cuomo and co. couldn’t have expected the response it would receive; with its release, music fans worldwide were putting down the peroxide and picking up thick rimmed spectacles.

Musically, ‘Weezer’ is charmingly uncomplicated. The verse’s are based on repeating three chord sequences and the bass lines wouldn’t challenge a beginner to the instrument. Guitar Solos were few and far between and those that were to be found were far from virtuosic. Regardless, Weezer found their sound in such simplicity. In Surf Wax America, for example, we hear twangy, loosely tuned guitars play up to Weezer’s dweebish perception, before being thrown headlong through an overdrive pedal. This ‘Quiet Loud Quiet’ approach with guitars mutating into more ferocious versions of themselves is found throughout ‘Weezer’. It’s the aural equivalent of the underdog kicking back – the bite of the bucktooth. And it worked perfectly in tandem with their lyrics.

Despite the fist pump educing sounds created, The Blue Album dealt with some weighty topics – alcoholic fathers, social isolation and destroyed jumpers to name just three. For all its rock credentials, ‘Weezer’ reads like the confessions of a man guilty about existing. Holiday is a tale of escapism, with no plans to return, In the Garage finds a social outcast alone, with posters of X-Men and KISS members to keep him company and the heart-breaking Say it Ain’t So, sees Cuomo open up about his father’s alcoholism;

But that’s not to say Weezer is a total lyrical downer. There’s plenty of mindless fun to be had here – Surf Wax America highlights the basic fun (and minuscule travel expenses) to be had on a ‘board and Buddy Holly is a two-and-a-half minute feel-good, brain-out masterpiece. Elsewhere, there are soft jabs at the jocks that would typically ostracize the bespectacled Weezer types. No One Else pokes fun of over-bearing boyfriends, with its “I want a girl who will laugh for no one else” line, pinpointing these muscles heads’ own insecurities and it exposes them with a subtle hand. Finally, Undone – The Sweater Song shows us Cuomo’s accepting his mentally unravelling due to the sheer moronity of his peers. In its entirety, this is an album about the banality of suburban life and the associated pains and humour that come with it.

It’s not hard to see why ‘Weezer’ is held in high regard. It championed the unchampionable; it presented us with clever, witty writing and ridiculously infectious melodies. It maintained America’s stellar rock output and it too provided the masses with one of the best music videos of the ‘90s. It paved the way for the melodic end of EMO music (trust me, you wouldn’t want to imagine that genre without them) and highlighted how it was possible to make interesting rock music about mundane or depressing suburban life. Yet, Despite all this, ‘Weezer’ is an album constantly yearning for more, something intangible. Album closer Only in Dreams shows us Cuomo reaching out for what’s not there – searching for solace in this invisible woman and finding comfort only as he sleeps. Torn by this, we fade out with Cuomo hinting at bliss in an eternal slumber. It’s a solemn note to and a classic on, but it just further nails home that ‘Weezer’ is for the disenfranchised and loners.

This truly is Weezer’s highest point. Their subsequent albums declined slowly in quality, before becoming shaky, to their present state of embarrassingly poor. As a band, it is perhaps unfortunate that Weezer didn’t take advice from the great Neil Young: “It’s better to burn out than fade away”.

Did you enjoy this weeks edition of Golden Vault? Get involved, comment below and join us next week in the Golden Vault where we’ll be discussing  ‘Vitalogy’ by grunge Gods Pearl Jam.