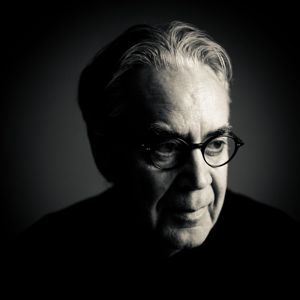 You know you’ve made it when you get brought to another country for a concert titled “Howard Shore in Dublin”, but all you have to do on the night is a five-minute introduction to your music. Possibly the expense was more a reward for the RTÉ Concert Orchestra, who enjoyed days of workshopping with the world-famous composer with his long-term collaborator, conductor Ludwig Wicki.

When it comes to film music, Howard Shore tops bills, but what about his other compositions? The performance in Fanfare for Organ and Brass is just as epic as anyone could have hoped. Complex organ lines contrast with massive chords from the brass and interweaving lines, expertly performed. Not much in the way of melody, but who needs melody when you’re Howard Shore? One disappointing aspect shown up with the absence of the rest of the orchestra was the lack of balance in brass section – one lone woman in what is a typical brass boys’ club. Surely by now we should be past this.

In the well-designed programming, another section of  the orchestra is introduced as the cellos and mezzo-soprano Clara Sanabras take to the stage, playing the first selections from Seven Pieces for Chamber Orchestra, beautiful together. The long, sweet phrases stand in stark contrast to what we hear after the full string section has entered. Following this, Sanabras departs as the cellos are joined by the rest of the string section. This part of the evening displays Shore’s more stark contemporary leanings and has constant movement and bursts of energy throughout.

The first movement of Shore’s Mythic Gardens concerto for cello and orchestra contains nothing too moving or virtuosic; the most memorable part is the clapping and disturbance at the end of it, which breaks what mood has been set. Thankfully after a somewhat bland start, the second movement finishes with a moment of real beauty from soloist Emma-Jane Murphy. From here, with just a moment to exhale, a raging leap brings us roaring into the final movement. Murphy’s flame-coloured dress is brought into context as the licks and strokes of her bow illicit an inferno from the orchestra. A powerful motif is brilliantly developed as it is passed through both the orchestra and the full range of the cello, building to a cataclysmic ending.

Finally the full power of the orchestra and combined choirs of the DIT Chamber Choir, The University of Dublin Choral Society and RTÉ Cor na nÓg unleashed for the Prophecy and Return of the King from The Lord of the Rings. From start to finish, the feeling in the room is electric. The brass section steals the show, as is only right in this music, until Sanabras joins in for her Into the West finale. Far more at home in a concert hall rather than the likes of the O2, she relaxes and captures the atmosphere, creating real magic. Just as moving and grand as the films, the performance manages to be even more energy thanks to Wicki’s conducting, breathing life into the piece that you can only ever get in a live performance of this calibre.

A night of mixed styles, the concert is a resounding success with an extended standing ovation for Shore, Wicki and the ensemble. Thanks to Lord of the Rings we may have gotten a few odd looks head-banging away, but we loved every minute.

Maria Kelly at The Sound House

‘The Hunger’ by Donnacha Dennehy