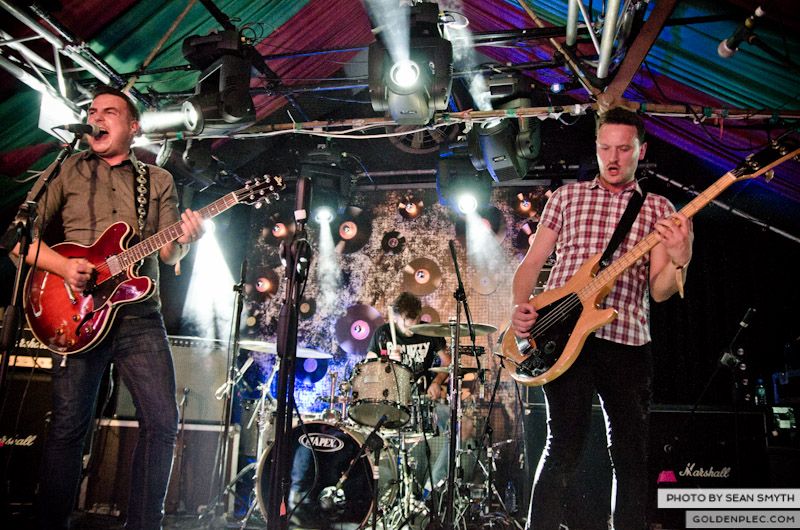 The Minutes took time out of their busy schedule to have a chat with us in the Morrison Hotel before their Arthur’s Day performance. The band have had a jam-packed year and a half and shared with us their thoughts on the current Irish music industry, on why playing in Dublin is better than anywhere else and on their dreams of running their own radio station.

So the album was released about eighteen months ago now?

Shane: Yeah, the little bastard, he’s gonna grow up to be an awful little fucker.

I guess to everyone else it seems like you’ve had an absolute whirlwind of a year. What’s it been like for you?

Shane: It kind of feels like two weeks, it doesn’t seem like that long ago. We’ve achieved all the goals we’ve wanted to achieve but we’ve got our sights set on this one goal which is the second album.

Tom: It’ll all start again once the album comes out and that’s exciting.

What have been the highlights for you guys? You’ve done so many amazing gigs in the past while like Eurosonic and SXSW.

Tom: Yeah in terms of crowds and seeing crowds grow, Germany and France have been great. Last weekend we played Hamburg and Berlin and when we played Black Keys the crowds went mad for it.

Mark: Ah there’s no comparison at all. The Germans are deadly and all and they’re really cool but when we play in fucking town people go mad.

Mark: It’s great. Without all the girls and lads we’d be nothing. This lad in Maynooth last week was like “HERE, WHERE ARE YAS FROM?! ARE YAS FROM BRAY? I THINK YIZ ARE FROM BRAY” and then some other lad fucking threw a pint over us.

Tom: Like the first time we headlined Whelans was just incredible we couldn’t hear anything. Playing and getting that response in your hometown is just overwhelming. It was the same with the Academy. It was just brilliant. There is no comparison.

Mark: After that gig in the Academy we went to support Flogging Molly which was mad, cos we were back out in Germany where no one knew who the fuck we were. I’m sure when you’re a huge band and you know that there’s going to be ten thousand fans it’s a different story but when you’re opening for someone you’ve to prove yourself.

Tom: You’ve to steal some fans and get them on board.

Do you think the time away from Dublin and all the touring has given you a different perspective on the Irish Music Industry?

Mark: It’s still a load of shite, we basically did this ourselves with the help of Rubyworks.

Shane: It’s a load of shite. The shit bands rise to the top and the great bands get fucked over.

Tom: It’s harder to rise out of Dublin as a band than anywhere else. We were banging our heads against the wall for years. It was as soon as we stopped listening to all the supposed Irish Music Industry heads that things started to happen to us.

Shane: All these dickheads reviewing albums that don’t have a clue what they’re talking about.

I don’t know if you’ve had a chance to read the papers yet this morning, you’ve probably been busy doing interviews. I was wondering if you heard what Steve Wall said in the Irish Times  about Arthur’s Day neglecting Irish talent by only choosing UK headliners?

Shane: Ah see we can’t really comment on that because we’re playing but fair play to him. He has a point but we’re glad to be involved.

How do you feel about being one of the Irish acts included on the bill in the middle of the controversy?

Shane: Personally we don’t give a fuck if our name’s in the paper or not. All these English bands, they’re all shite we don’t like any of them. But that’s because it’s a massive marketing thing. Fair fucking play to them. Whoever thought this up is a genius. I’m really glad they asked us to be involved in this, it’s great fun to be involved. We’re from fucking Dublin and we love Guinness. [everyone laughs] It’s like Paddy’s day without the fucking scumbags. The fact that the English bands are on the poster, like who gives a shit, that’s what it’s been like since the 60s. It’s always going be like that. It’s an English marketing company. They’re always on the radio too.

Steve Wall was also saying that too many people are too scared to speak out about the lack of home-grown talent on the radio and I know you guys had something to do with the Play Irish Music campaign. Are you still involved with that?

Shane: I was promoting that a bit online. They had actually championed one of our songs ages ago. All they play on the radio in Ireland is shit.

Shane: We were told our music was too heavy for the radio.

Mark: You could bang your fucking head against the wall and give out about how it’s not getting any better or you could take your shit and take it somewhere else.

Shane: This is going three or four years and the first year this [Arthur’s Day] happened we were just getting our shit together and we were giving out about it and that was only because we weren’t involved. Now we’re involved and we’re lucky enough to be. We did it last year and it was fucking great craic.

Tom: Like what more do you want as a band than to be playing in front of people and that’s what we’re going to be doing.

Shane: The headline band at our venue are fucking great, we’re all fucking massive fans. So seeing that band in a small venue is going to be deadly.

And then you’re going to the Pygmalion after the Grand Social?

Tom: Yeah, we did three gigs in one night last year. We were buckled. [all laugh]

Just to go back to the radio issue for a second. What do you think about Phantom or DJs like Jenny Huston who were quite important for you guys?

Shane: Jenny Huston, Dan Hegarty and Paul McLoone; they’re the exceptions. They all championed us but unfortunately they’re on at the time of night that doesn’t have the power of radio.

Mark: When people are watching Coronation Street. There’s always an alternative show and that’s the late night one. Radio in the daytime is for people who don’t give a fuck.

Shane: I have thought about going into a radio station and taking it over. We were also talking about starting up our own private radio station. That’s always been a childhood dream of ours. Sitting in a barn in my garden in Kilternan where no one knows where we are and we’re freezing our arses off in December, pumping out the tunes and calling out free gaffs on air.

What would you play if you had your own station then? How would you do it?

Shane: Just give out about people all day, every day. Put on the tunes. Have a smoke and a can.

How did some of your gigs like JD Roots and the one on top of Music Maker come about? Was that out of your own initiative?

Shane: Yeah, partly initiative. From day one we’ve always liked to think outside the box, like doing gigs in our gaffs or the Magical Mystery Tour around Dublin where we filled a bus up with people and drink and they didn’t know where they were going.

Did you do that?

Shane: Yeah, yeah we did. We weren’t on the bus but it dropped them off at the Thomas House where we had all our shit set up downstairs.  We were asked to do the JD Roots thing. Initially we didn’t know if we should do it or not but it was a good experience. That’s how we got to know the Delorentos and We Cut Corners. They’re fucking sound.

You mentioned the second album, do you have a date or have you started recording?

Tom: Well late summer next year but we’re not in any rush really. It has to be good obviously before we think of putting it out.

You probably get this question a lot at the moment but you always hear people talking about the ‘big second album’. After the success of the first do you feel the pressure?

Tom: We’re not listening to anyone. We’re locking ourselves away and doing the same thing we did with the first album, trusting our own gut instinct first. If we do the exact same thing with the second album we should have no worries. We’ve got the record label and we’ll work a little more with them. This is the first time we’ve been under contract with a label to try and bring out an album. The first one was ready to go and then the label brought that out.

Shane: Why would you worry, ya know?

Mark: Sure if we can’t write a song now we may as well fuck off and become bin men or something.

The Minutes will be back in Dublin to play Whelans on the 7th of December before they set off to support the Hives on their UK tour.