Mullingar's Sion Hill aka Nathan D. Hollingsworth Johnston has flown somewhat under the radar in Ireland, despite opening for the likes of a-ha, Alice Merton and Pete Doherty throughout Europe following the release of his soulful debut album 'Elephant' in 2017. Like many Irish acts in recent times, such as Gavin James, mainland Europe and Germany in particular provided Sion Hill with opportunities unavailable to him at home.

Signing with a Hamburg-based record label, Sion Hill said goodbye to Mullingar and Ireland, settling for a time in Berlin where he busked and gigged constantly, assimilating the pace and atmosphere of the city into his songwriting. Now road-hardened, Sion Hill has set his sights on creating a profile for himself much closer to home. And he looks like he's off to a good start with his first post 'Elephant' single Fuel Kids, his most successful release to date.

Sion Hill's first Irish headline show in some considerable time takes place in The Sugar Club, 3rd December 2019 and the Mullingar man is hoping that it is the first of many more to come in 2020. 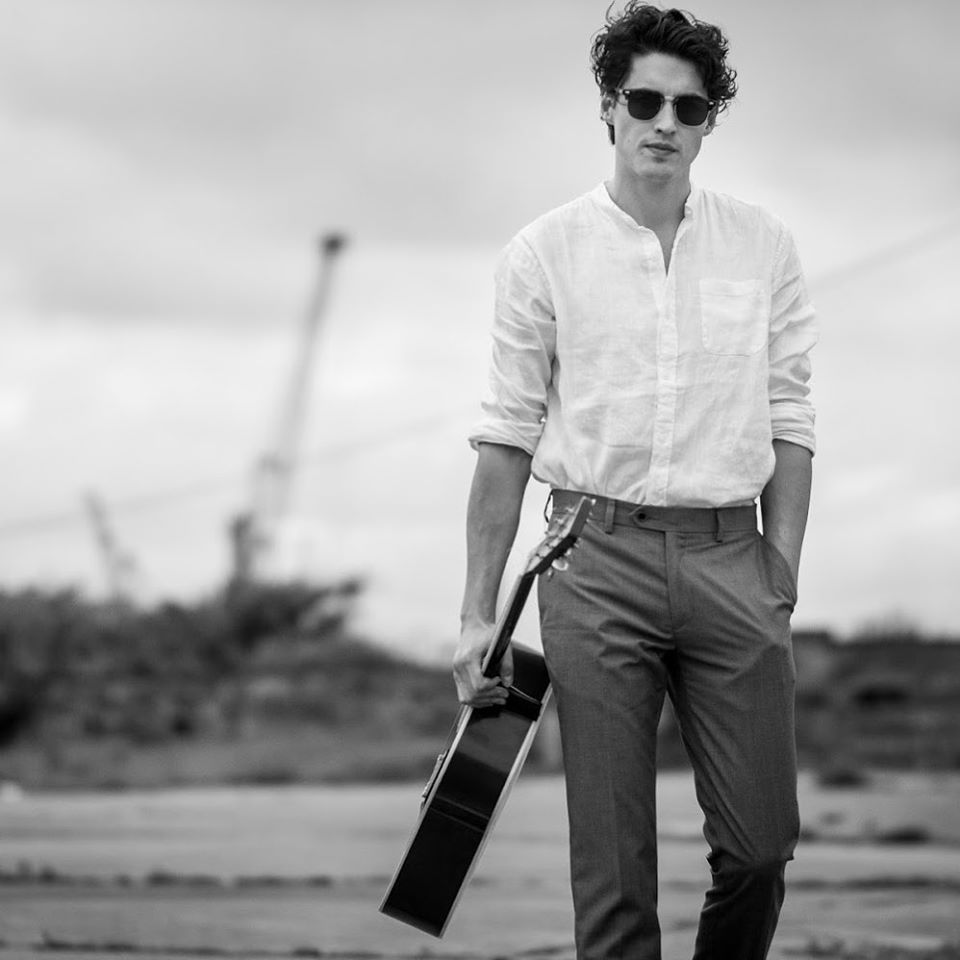 Nathan D. Hollingsworth Johnston is a bit of a mouthful, but why did you choose the moniker Sion Hill to release music under?

A mouthful indeed… Sion Hill started as the name of a duo I had with a friend from Bantry in Cork. It’s a common place name in Ireland - there’s even one just outside Mullingar where I’m from, and my auntie lives on Sion Hill road in Dublin. It kept popping up everywhere and I suppose it just felt like the right choice at the time… then the duo split and I just kept it so I didn’t have to change everything again. Although looking back, Hollingsworth is pretty royal. Maybe that would have worked too, but I’m not sure I could have gotten away with it.

Why did you move to Berlin and what affect did it have on your creative output?

I signed with an independent label in Hamburg in Germany, so it made sense to move to mainland Europe so I could tour more easily and work more closely with my label.

I think living abroad is always beneficial to writing, whether it be music or literature.  Berlin is a very international city and full of history and culture so it’s hard not to be inspired there. Being somewhere that is such a melting pot of different people from so many places opens one's eyes to the world and new ideas, both socially and politically, and I feel like I learned more than I can describe in a paragraph.

Is it true that your debut album ‘Elephant’ was named after an interaction you had with a homeless person in Berlin?

When I first moved to Berlin I played a lot on the streets and there was a homeless kid from Poland who used to watch me perform. Obviously he couldn’t give me anything in terms of money so he used to give me cans of Carlberg ‘Elephant’, which is about 12% abv and literally tastes like cat piss. But I drank it anyway because of the gesture. The elephant in the room is generally the topic, or in this case the person that is ignored… and I wanted this to be a homage to all those who feel left out or forgotten. Everyone’s opinion matters and everyone deserves a chance. The album isn’t so much about the interaction as it is about the idea and hopefully, if you’ve listened to it, that comes across through the lyrics.

There’s huge soul influence throughout your music, something which is rarely so evident with Irish musicians. What attracted you to that type of artist?

When I was younger I was always attracted to American music and more specifically, guitar based music. Most popular guitar music has come from black music. Soul music is a return to black music’s roots. The honesty in the lyrics, the pain in the vocals on top of a generally groovy and upbeat bed of sounds grabbed my attention. Irish folk music has a lot more in common with black music, and more specifically ‘soul music’ than we realise. It came about at a time of oppression and through music, this group of people were able to come together to sing and dance and feel like they were part of something. Plus, every time I hear ‘A Change Is Gonna Come,’ it moves me and I don’t think I could ever shake that feeling to be honest.

The video for Go On And Get It For Me was filmed in Sam’s Barbershop in Dublin. How’d that come about?

A friend of mine was working in Sam’s and had been saying I needed to come in for a free haircut and that we should do some sort of collab. I wanted to do a live session of an acoustic unreleased track and I wanted do it in an old-school barber shop as I’m a big fan of '50s popular culture, James Dean, Marlon Brando. I loved the '50s vibe in Sam’s so I asked my mate if we could shoot in there and it all sort of came together…

How did you find working with Christian Tierney?

I was introduced to Christian through Nathan Barlow. At that time he was filming live sessions around Ireland so I asked him if he’d like to work together. That was some years ago so he hadn’t quite had the experience he has managed to gather since then… he’s really killing it at the moment and some of his work is incredible. I especially love his Instagram stories and all the influences he shares. I remember him being a little quiet at the start of the shoot which is cool because it makes it easier to get on with things. He’s super professional but he’s also a really funny lad and easy to work with.

I’ve tried to get him to come back and work with me a few times since but he’s always busy! Hopefully I’ll catch him again soon.. Maybe at the VMA’s. Yurt.

Fuel Kids is your most successful song to date, where you surprised by the reaction after 2 years out of the limelight?

Nah, I think my first record never blew up so much as it was very independent and we didn’t have much support in terms of radio play and Spotify, so I expected this track to do reasonably well.. it’s also much more radio friendly and upbeat and we released it in the summer so the timing was right.

Tell us the inspiration behind Fuel Kids?

It’s very easy these days to become disheartened in this business and to be overwhelmed with negative thoughts of ‘I’m never going to make it’ and constantly comparing yourself to the success of others. I was in the Hamptons on a J1 visa where I worked in a private members club serving the uber-rich elites of NYC and those thoughts were constantly on my mind. How can I ever reach these heights of success? Do I even want to? Why was it so much easier when we were younger, we had that spark and didn’t let it get put out so easily?

A lot of my tunes are quite hopeful and this idea of, 'come on man, don’t let your fire go out!’ was not only a message to all the other people out there who have these thoughts, but also as a sort of mantra to myself to keep going. Don’t give up so easily and remember all the dreams we had when we were younger. No matter how things pan out, once you stay true to yourself, everything will be okay.

Is Fuel Kids a good reflection of the direction album two is going in or will the soul sound still be a major presence?

I have recorded a lot of new tunes with various different producers such as Rich Tierney up in Liverpool who produced Blossoms and Clean Cut Kid, and Marcus Brosch in Hamburg who I worked on Fuel Kids with… I think they all come from a different place and have many different influences but it’s safe to say there are still a few more soulful tunes bopping about. You’ll just have to wait a few months to find out for yourself ;)

You’ve worked with Nathan Ivor Scott Barlow several times on music videos. Is that a collaborative experience or do you just trust him to realise his vision?

Barlow contacted me on YouTube a few years back after seeing one of my live sessions and we clicked pretty fast. It was definitely a more collaborative experience as I had a pretty clear idea of what I wanted the videos to represent and wanted to try and convey a particular message rather than just have me looking cool on camera. But Barlow’s eye behind a lens is really incredible and he was instrumental to making those ideas come to life… plus he’s a lot of fun to work with too. He brings so much to the table and has great, often weird and quirky ideas. We worked very hard on realising those videos and I’m very proud of how they turned out.

You’ve been opening for the likes of a-ha, Pete Doherty and Alice Merton on tour. What lessons have you learned from those acts who are at different points in their careers?

They were all extremely different tours. Alice’s crowd is much younger and there were a lot of girls, so it was probably a little better for me and I gained a lot more new fans, whereas a-ha was basically 10,000 middle aged women who didn’t know how to use Instagram or Spotify very well so it was harder to get them to come back to another show.

It was really interesting to watch Alice blowing up at the time, she was excited and it was her first big tour so that was really exciting to be around.. but a-ha were a little more road-hardened and had been doing it for longer. You could see them getting tired towards the end. There's only so many times you can play Take Nn Me before you get sick of it.

All I can say about the Pete Doherty tour is that there was a lot more parties and I remember a whole lot less. But I’m not really allowed to speak about that…

You played several Irish festivals this year. How did you find playing in front of Irish audiences again after so long away?

Yeah it was really nice to come back, actually. I love playing in Ireland, especially when my friends and family come to watch, it feels like a bit of a reunion in a way and that's so lovely. I just never have any time to chat to anyone afterwards!

You also slipped in a performance at Ruby Sessions earlier this year. How did you find that?

Not going to lie, that was a bit of a write off. I was playing with a drummer and my keys player and some random lad gave us a few pulls off some really strong weed right before we went on stage.. none of us can remember the gig and I’m pretty sure the drummer switched to playing guitar last minute. I would love to play there again on a more sober level though, especially with so many new tracks in the pipeline! Hit me up Ruby Sessions. xoxo

You’re playing you first headline show in Dublin in some time in The Sugar Club. What can people expect from that performance?

It’s going to be with a 5-piece band and I have some of the sickest musicians in Dublin at the moment playing with me so I’m super excited. Expect trapeze artists, dancing Christmas elves, fireworks and strippers. We’re going all out for this one.