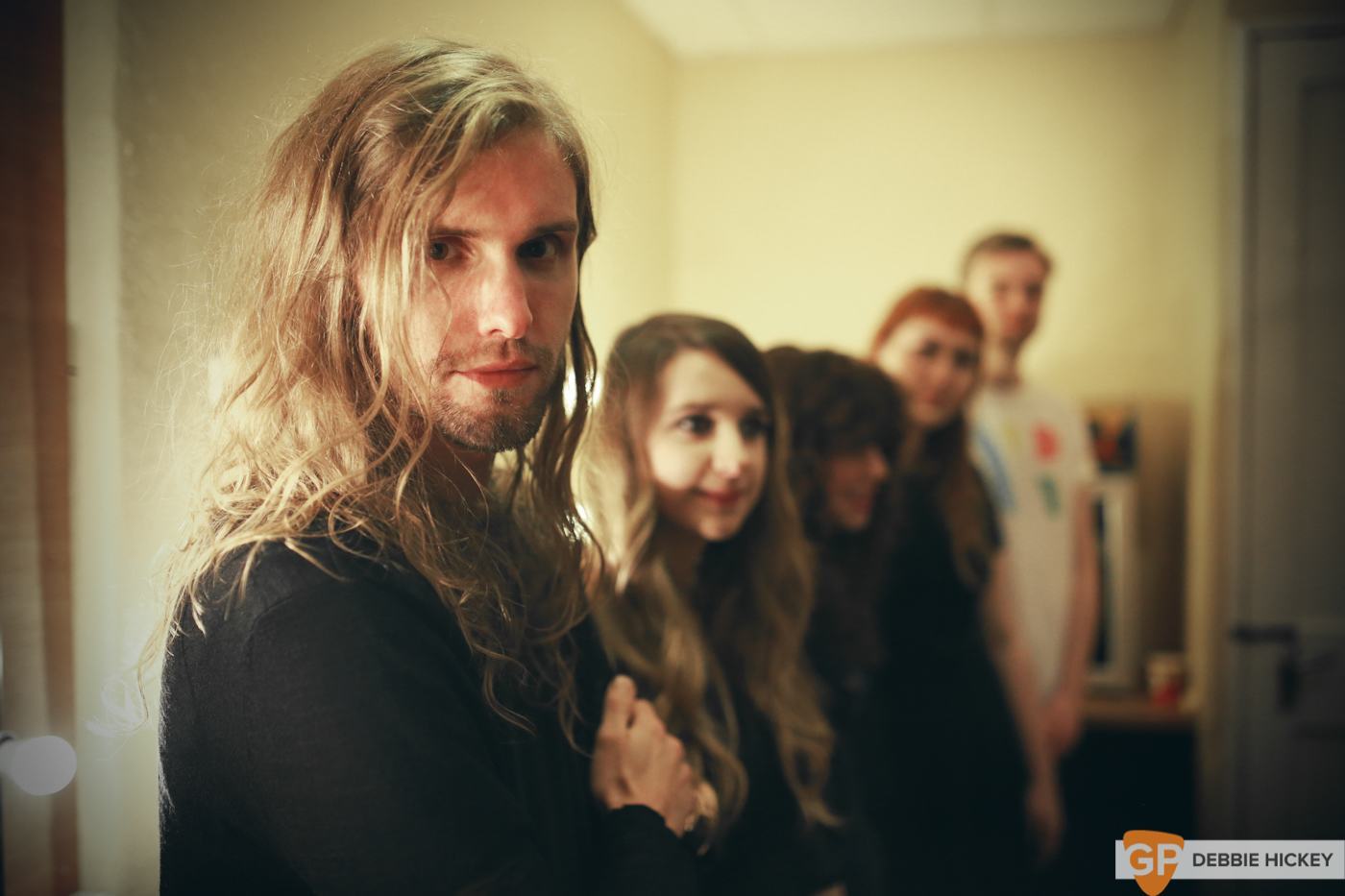 New Kids On The Block

Belfast five-piece Pleasure Beach burst onto the scene in 2015. Formed in January, by December they had signed a record deal, released debut EP ‘Dreamer To The Dawn’ and single Go, and supported The Vaccines, All Tvvins, Jape and The Coronas with less than twenty gigs to their name. That’s efficiency right there.

We sat down with lead singer and guitarist Alan and drummer/ vocalist Lisa, as they prepared to open for All Tvvins in The Academy. Alan and Lisa aren’t sure if tonight is gig “eight or nine” but more on that later.

“I know Conor [All Tvvins/Cast Of Cheers] from back in the days of our old band (Yes Cadets) they'd support us up in Belfast and we'd support them down south, that kind of thing. They're really good guys.” says Alan, his head protruding slightly from the darkness of a dimly lit unopened Academy Two like a sci-fi villain.

“We've sort of done the apprenticeship of the local circuit,” says Alan. “Lisa (drummer) was in Yes Cadets as well, and Cheylene was in a band called the Wonder Villains.”

Wonder Villains are best known for their song Zola, about retired Italian international footballer Gianfranco Zola, who appeared in the video for the song in which the band played football, naturally. 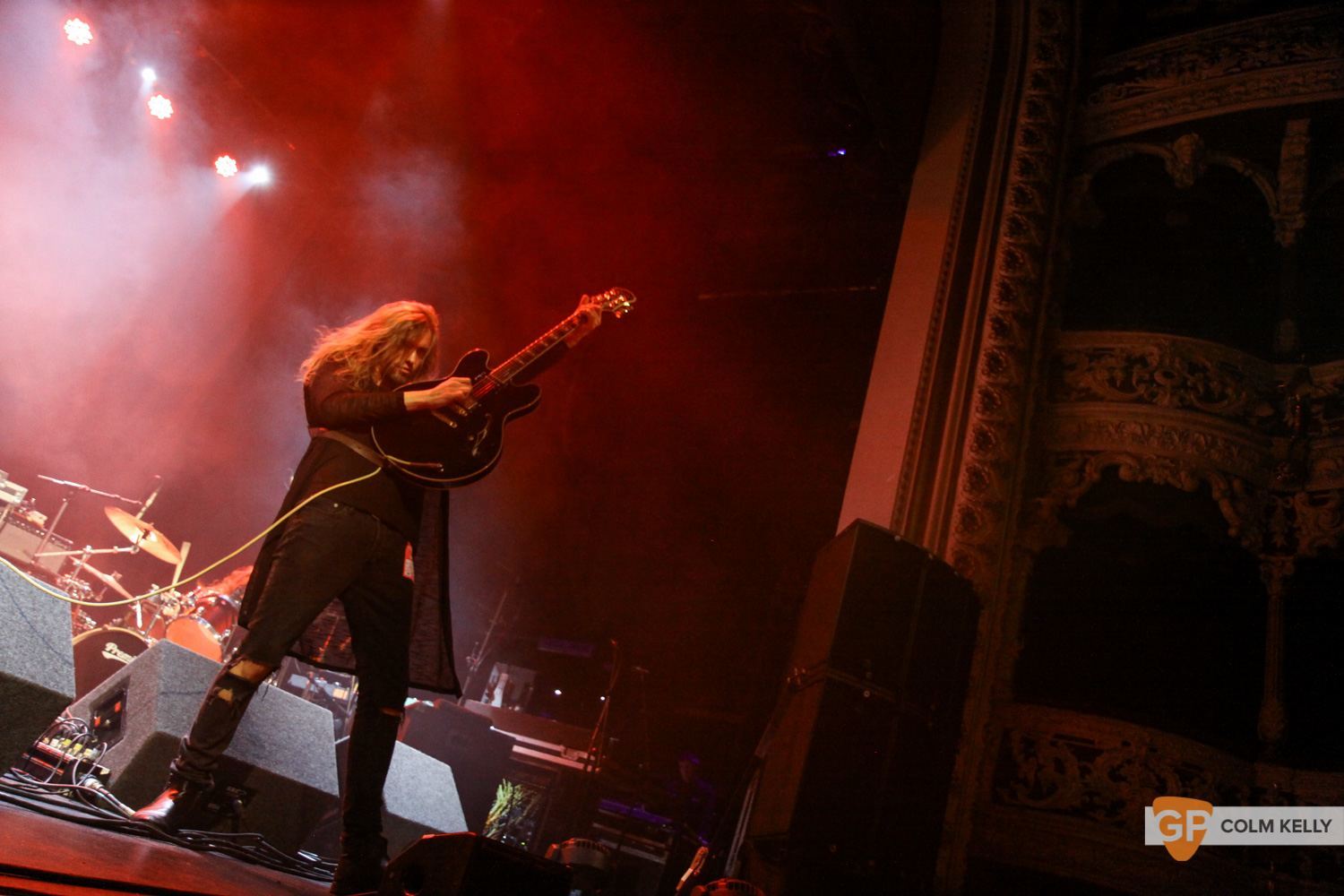 So how did Yes Cadets and Wonder Villains end up on synth-pop Pleasure Beach “It was totally organic.” says Alan. “I started writing songs that just didn't sound like stuff that would fit into that project (Yes Cadets) So it was a bit: 'Do we continue with that or what do we do?' Then, Yes Cadets' bass player got a real job in London.”

Yes Cadets were no more, opening the door for Lisa and Alan to explore new sonic avenues.

“I was at a bit of a loose end musically,” says Alan. “I was writing but not performing, and then we all kind of stumbled into each other working in various coffee shops and that kind of thing." The formation of Pleasure Beach was "massively organic, everybody we took on was the right person, right off the bat.”

Casting off the shackles of the past and starting afresh with a new name and a new sound allowed Alan to push his creations further than he had previously imagined.

“It was suddenly a possibility to write for things like five vocals,” says Alan.

“It worked up from two to three to four to five and now it's vocals galore,” says Lisa. 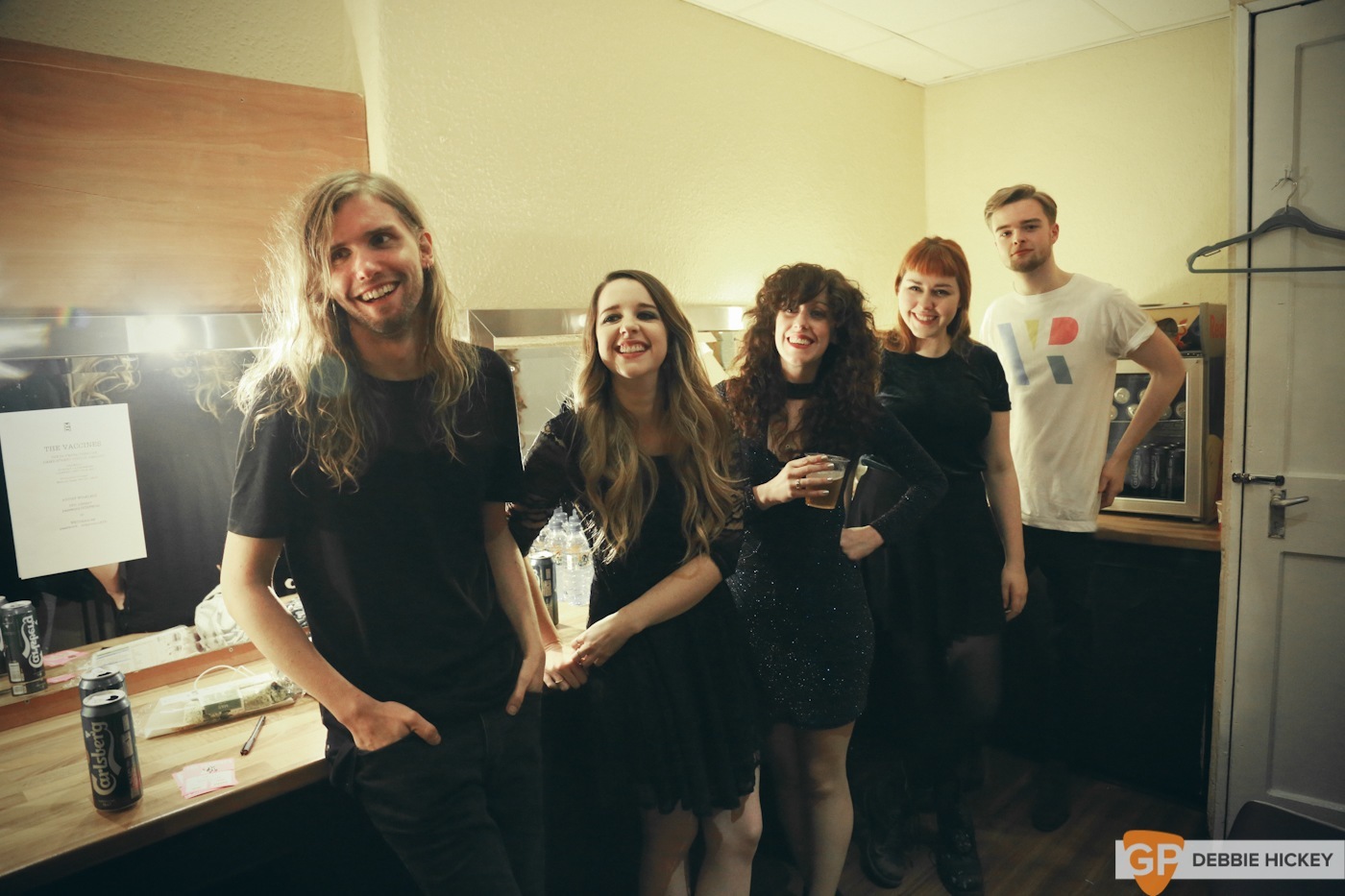 The material on Pleasure Beach’s debut EP ‘Dreamer To The Dawn’ contains the first songs the band worked on together. But does this mean these songs are still a fair representation of Pleasure Beach today?

“It is,” says Alan, “they're still a staple of the set, but we're moving on. It's becoming a lot clearer what we have to do when it comes to writing that (The EP) was kind of shooting in the dark a little bit.”

“We're together since January and we did the EP in June or July,” Alan pauses. “July it was, we were locked up in a recording studio on the 12th of July up in Belfast. Literally right in the middle of loyalist Sandyroad in Belfast.”

One clear benefit of Pleasure Beach’s efficient approach to writing and recording is that they manage to capture the songs while they are still fresh and exciting for the band themselves. "Oh, it's still quiet fresh," enthuses Lisa. "Because this is what gig nine?"

She has to ask Alan before they eventually settle on: "Gig eight."

Eight gigs into their career and Pleasure Beach find themselves about to play a sold-out Academy in Dublin, supporting one of Ireland’s most exciting new bands, All Tvvins. It’s a fact that’s not lost on them. “We've had a lot of really good support from down south, Dublin in particular it's been really cool,” says Alan.

“Nobody really goes to gigs in Belfast anymore,” adds Alan. “There is a scene, but there will be one buzz gig a month and everyone will go to that one buzz gig, but there are gigs happening every night and they are just empty. The club nights are where it's at. The club nights are what the venues push. It used to be different. It used to be all about the live music scene. When I first moved to Belfast, the music scene was buzzing. Maybe I'm just out of the loop but I never hear about anything.”

The down south support also extends to radio stations. “It's a good feeling driving into town and flicking on the radio - which has happened a few times - and Go comes on the radio,” says Alan. 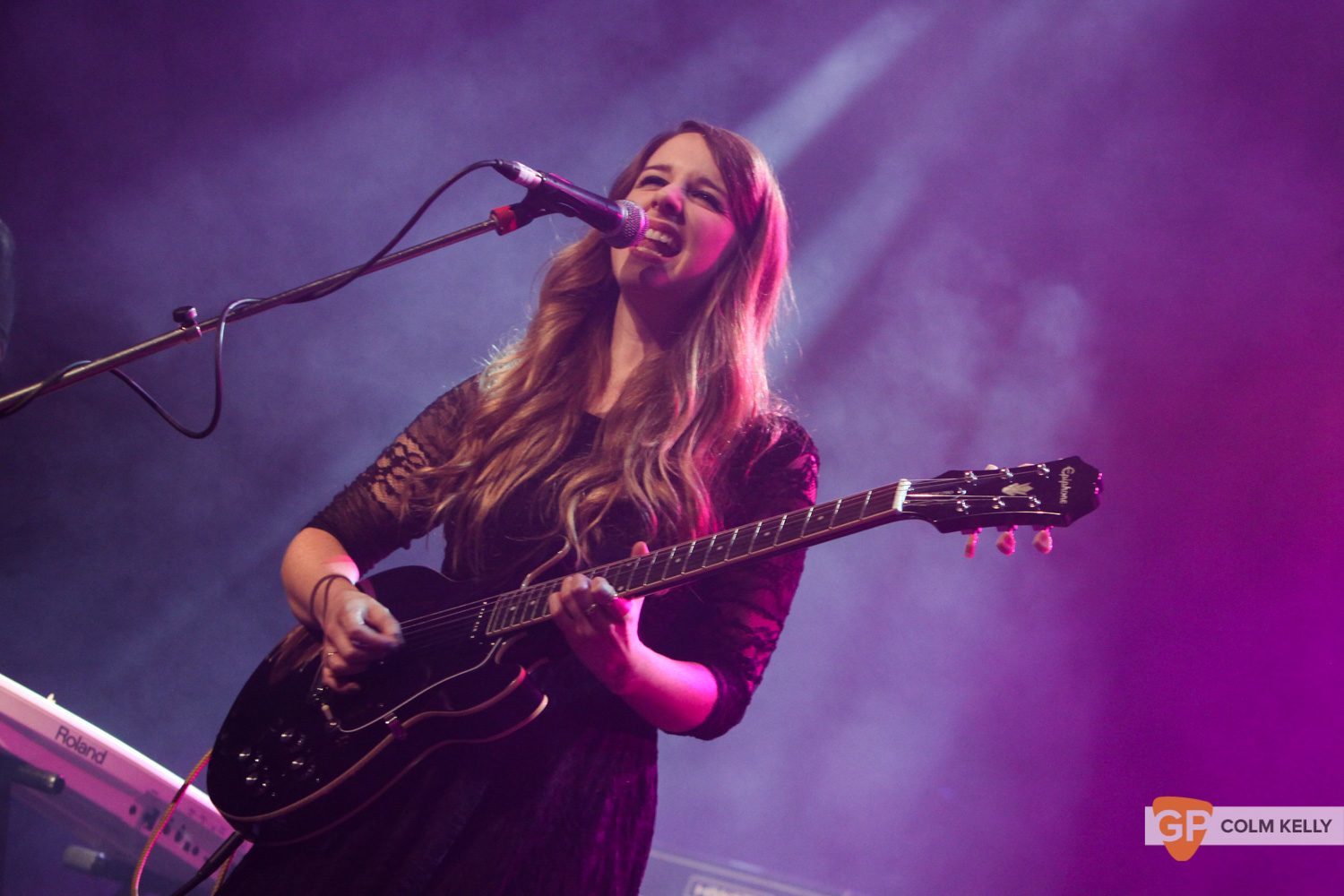 One Dublin blog was so impressed with Pleasure Beach’s debut EP that they gave it ten out of ten. But how do the band feel about such expectations being placed upon them?

“Ten out of ten,” says Alan, shaking his head in disbelief. “Does anybody deserve ten out of ten for anything that's ever been done, ever? I'm not sure.”

Pleasure Beach’s 10/10 debut EP ‘Dreamer To The Dawn’ was recorded at Start Together studios, Belfast where bands such as Not Squares and So I Watch You From Afar have also recorded. To clarify GoldenPlec didn’t give the EP 10/10, but it is bloody good.

“It's a really good studio with amazing facilities," says Alan. “My favourite studio I've been to in Ireland. I haven't been to them all obviously, but they have a fantastic array of vintage synthesizers and an amazing desk in there, and they really, really know their stuff.”

“That's my brother," says Alan, when we enquire about the video for the group's breakthrough single Go. "Isn't that handy," says Lisa.

"He's kind of just out of film school. He did a film production course. He managed to put that together for like £400 - £500 quid. He’s really into the special effects side of things, but without CGI. There's no CGI in that at all it's all done…should I give this away his trade secrets...?”

Alan asks looking to Lisa for approval before spilling the beans. “He got a traffic cone, turned it upside down and painted the inside black and mounted a camera, looking down into this thing and a light under it. He did lots of cool shit with this traffic cone. He spray-painted a load of gravel in these psychedelic colours and mixed it in with some black paint. Poured the paint into the traffic cone so it kind of oozed down and then he reversed it and sped it up. So, it was kind of, like you are rushing through a psychedelic space. I think he got the idea from Kubrick he did a lot of research into how Kubrick did (special effects) in 2001, with absolutely no CGI. The stargate sequence and that. I it was seriously DIY. The whole thing was done on nothing.”

Will the audio-visual nepotism continue into the future “I hope so,” says Alan. “If he can do it for £400 he's in.”

A Range of Influences

Pleasure Beach have been compared to Arcade Fire, Bruce Springsteen and The War On Drugs, but how do the band themselves feel about these comparisons and has it affected their approach to what they are doing?

“It's not stuff I ever really thought about when I was writing.” says Alan “Those aren't people I was listening to. I'm really into Leonard Cohen”

“You also went through a stage of not wanting to listen to music because you didn't want to be influenced by anything,” adds Lisa. 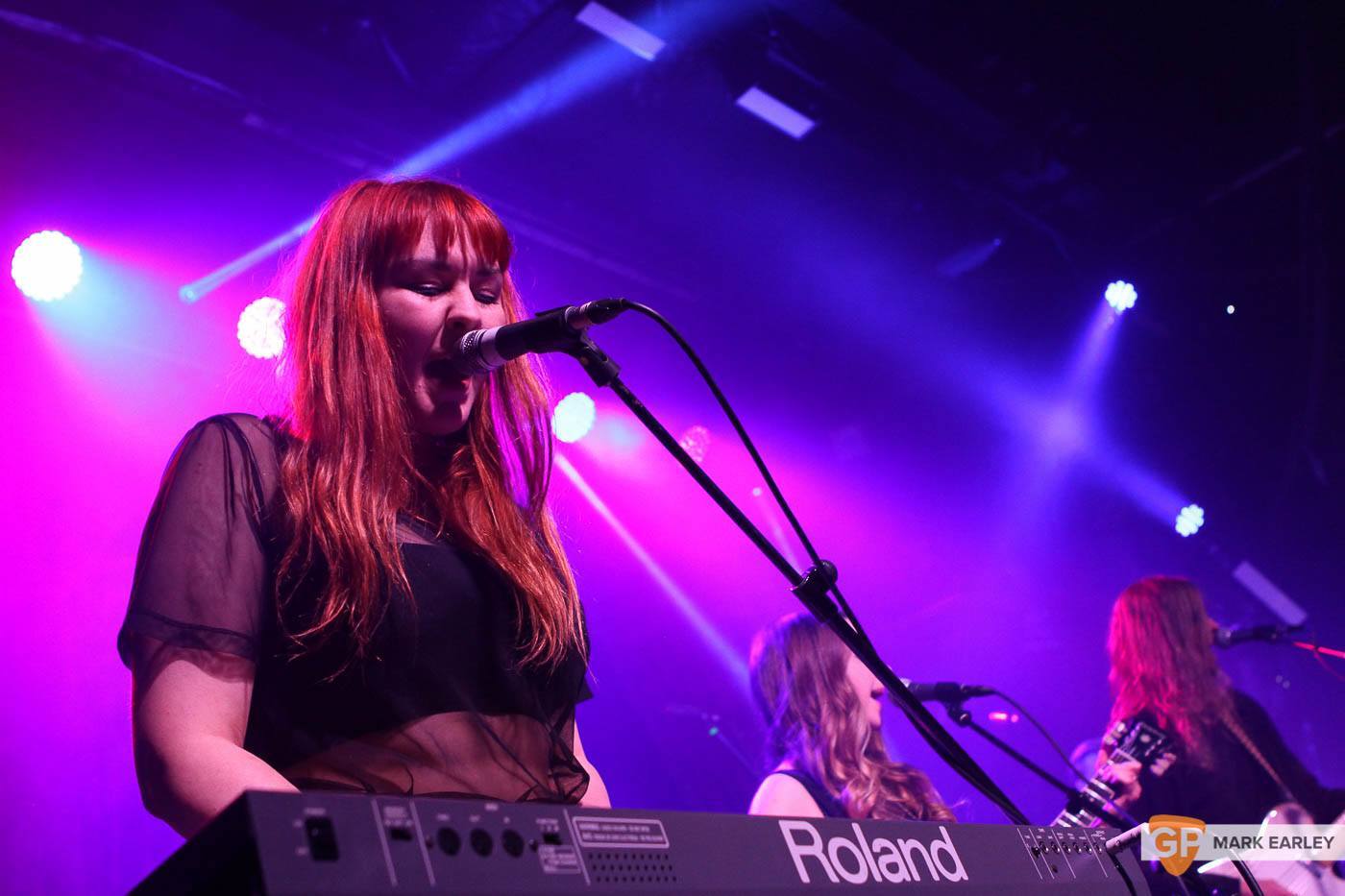 “Certainly my days of listening to Arcade Fire and Bruce Springsteen are gone,” says Alan “because I know if I listen to that I'm gonna go, maybe they're right and this is what we should do next. I can't do that anymore.”

“Anything that anybody mentions you can never listen to again.” says Lisa.

“If anything it's given me a little bit of direction,” says Alan. “Okay this is what people are hearing in this, maybe this is what it's like so I'll not change it too much at the moment and keep pumping these tunes out in the same sort of vein.”

“There's a massive danger in that as well, but I just write music that I want to hear. I know that sounds a bit clichéd, but if I was in a room and that sort of thing was going on I think I'd be into it. I hope I'd be into it.”

The next single Pleasure Beach will release is a track called Magic Mountain, recorded at the same sessions as the EP. "I don't really know how it's gonna work as a single actually," says Alan. "Because it's a minute and a half song and a four-minute long guitar solo." He laughs. "We'll see what the radio edit's like on that I guess."

What would a song called Magic Mountain be about? “It's the ramblings of an isolated stoner I guess,” says Alan. We are not surprised to hear Alan mention isolation as a lyrical theme however, as beneath the glossy exterior of Pleasure Bleach synth pop leaning indie, the lyrics are quite bleak, especially on single Go.

“I got really into watching all these really crappy George A. Romero 1980s zombie movies,” says Alan. “I was watching one were there was this underground lair and I got into this mind-set of writing a breakup song set against a backdrop of zombie apocalypse....

Pleasure Beach have played The Academy, Vicar St and The Olympia in Dublin and Ulster Hall in Belfast. Is the next step the 3Arena?

“It's nice to be busy, just playing,” says Lisa “playing music all the time as opposed to just working towards it, actually just doing it.”

Expect big things from Pleasure Beach in 2016, with a major presence on the Irish festival circuit all but confirmed. The group are currently on tour in the UK, before heading to Holland, but they will be back in Dublin once again for a headline slot in The Workman’s Club on Friday, 12 February 2016. And knowing Pleasure Beach, they’ll turn up supporting a major act again in Dublin before long.

Pass this article on to your friends