GP: [to Daniel] what are you like on cocaine?
Daniel: ”I don’t take cocaine!”
Dara: “She’s just jo-caine, Daniel.”

Daniel Fox and Dara Kiely of Girl Band seem to speak in their own special happy vernacular, one that is laden with puns and wordplay, at times pleasantly non-linear. “When you said ‘angle’’, it made me really want a tiramisu.” says Dara. It’s dizzying how the two long-time friends finish each other’s sentences, their thoughts intermingling with each other through lightning-quick back-and-forth chatter. Sometimes you have to step back and merely let their conversation unfurl wildly.

GP: Your touring schedule sounds hectic. How do you keep it together?
Daniel: "Napping."
Dara: "Napping, yeah."
Daniel: "You get pretty tight with each other [on tour]."
Dara: "You know when to leave someone alone when they’re tired and not fuck with them."
Daniel: "There’s always a moment to leave people alone and…"
Dara: "And then there’s a moment when you have to teabag Adam in his sleep.” 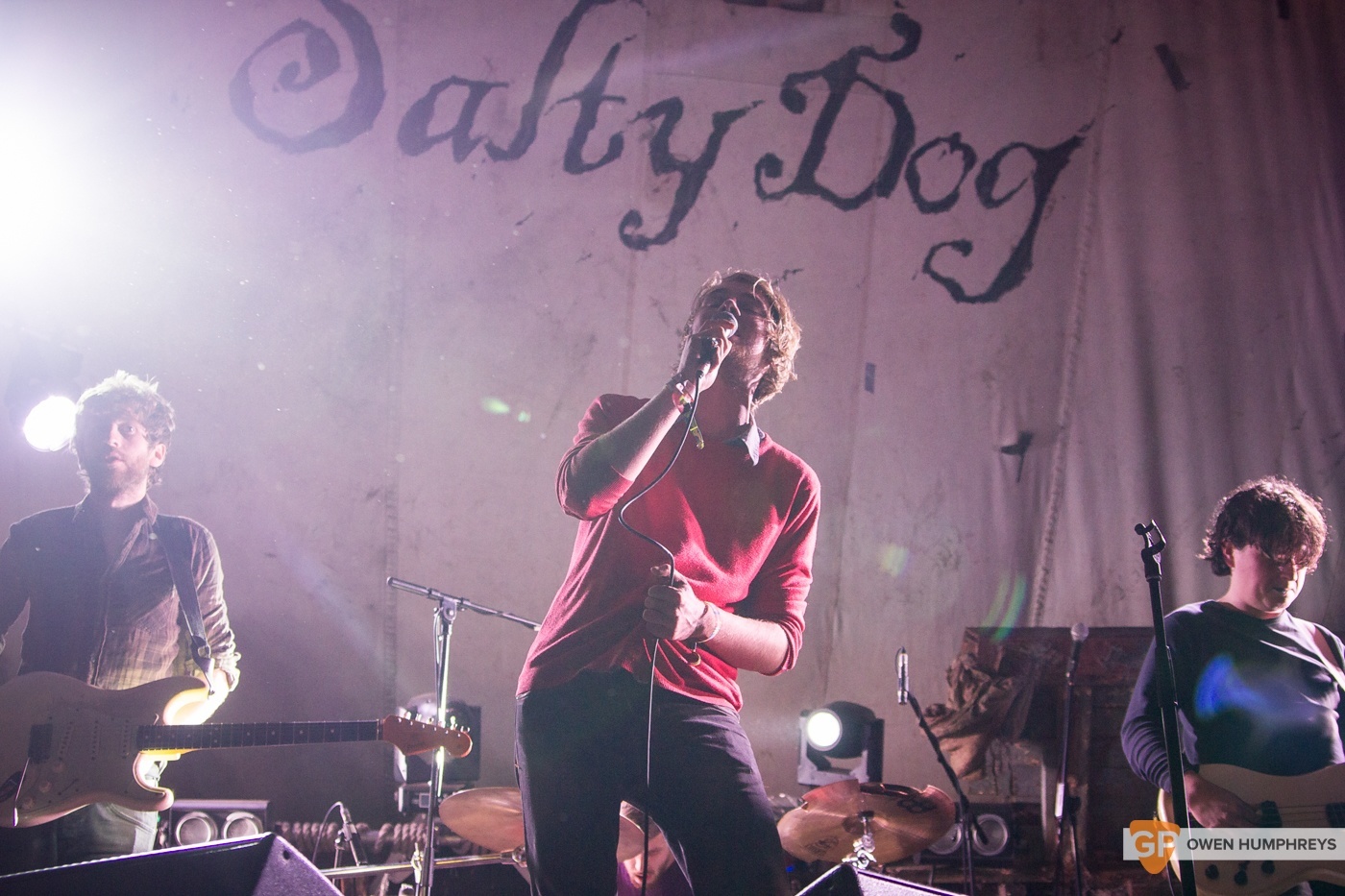 It seems incredible that people in close quarters could resist the urge to occasionally try and kill each other, that the four don’t end up at each other’s throats behind closed doors. Yet if anything, the group’s tight bonds of friendship are key to sustaining the insane trajectory the group have been travelling on with, it appears, nothing more than ease. Dara digresses several times to declare bro-mantic professions of affection. “I love this man.” Reciprocatively Daniel adds, “He tells me he loves me all the time.”

They puddle jump through Europe and North America, spending hours upon hours in airports, which is, as it turns out, particularly draining for Daniel. “I have a fear of flying.” he explains, “I’m getting better at it though, by pure force of exposure.” The experience is, for him, partially salved by a ritual that has developed of Dara scrawling phallic additions onto airplane magazines. “You know like Cara magazine on Aer Lingus?” asks Daniel “Every issue of it, every Irish rugby player has a cock drawn on him. Chicken and stuffing sandwich? Big cock.”

This giddiness bleeds into their creative process; the band self-produce, and so have ample opportunity to toy with their approaches. Their lyrics are tongue-in-cheek, playfully peppered with jokes both lyrical and melodic. "Literally every line is a fucking pun." says Daniel, speaking of The Cha Cha Cha. They attempt to explain; where words fail them, they mimic the guitars. 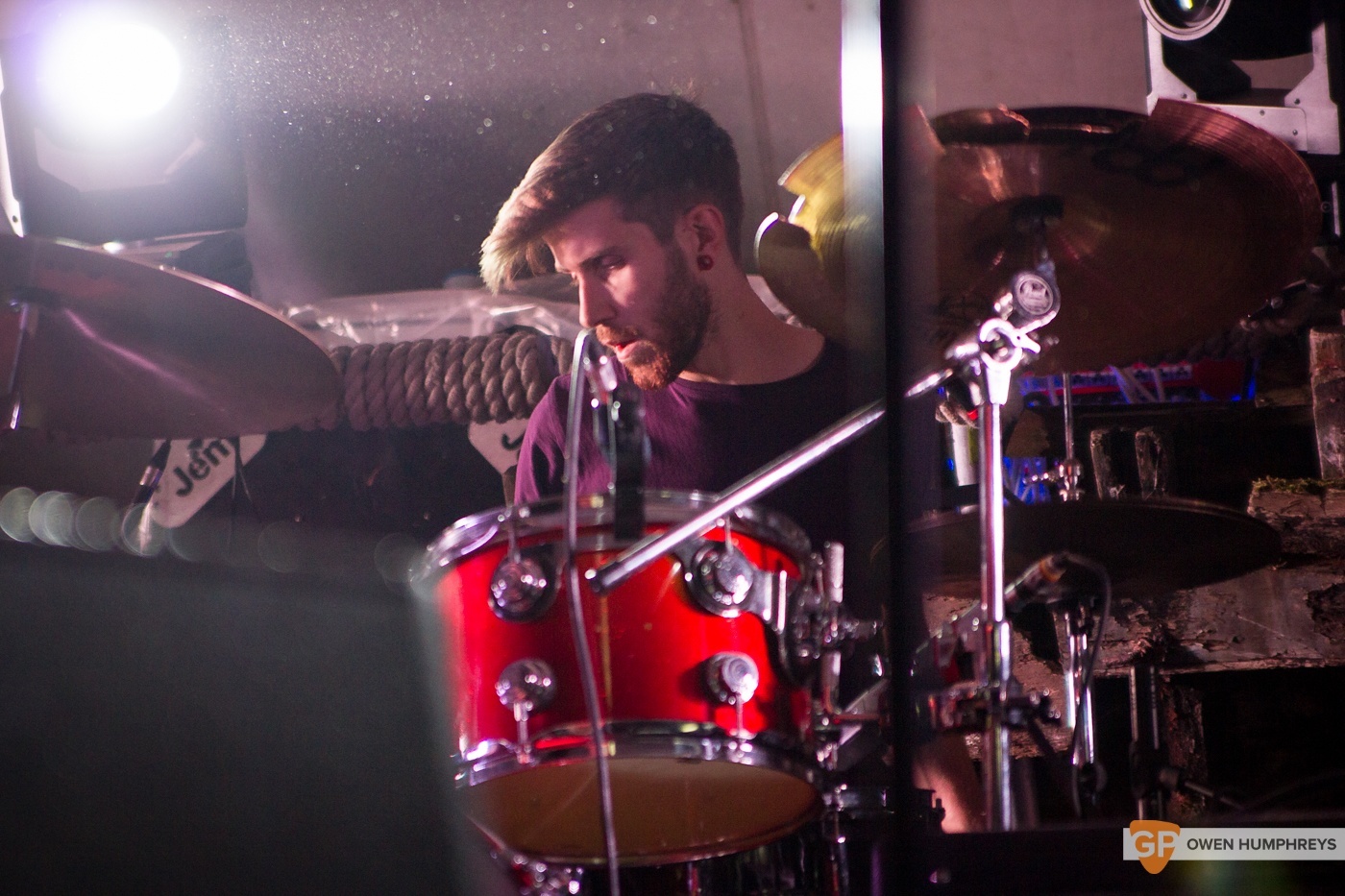 “There’s a lot of kinda in-jokes in the songs in lyrics but also in like...In ‘Lawman’ the kinda “ doo-do do-do” is kinda like a joke fill.” says Dara adding “There’s a lot of jokes, like in ‘The Last Riddler’ Al plays a chord at the start of the song..”

“Laughable!” says Daniel before trying to continue Dara’s explanation “...He plays a really clean...it’s very music nerdy. It’s starts off very Bwaah” Daniel interjects with an explosive, low-toned growling sound, "But then he just goes ’plink’ this really clean D Major chord which is...the song isn’t even nearly in D!” he exclaims. ”It’s hilarious,” adds Dara before pausing and eventually saying, “No one gets the joke.”

It’s a jarring contrast - their musical outputs are frenzied and vigorous, more steamroller than song at times, and yet the lads are personable, eminently friendly, nursing pints between their answers while emitting a near zen-like quality. “You can’t be aggressive all the time.” Dara explains, with Daniel adding, “We’re all pretty calm, like.”

Nevertheless, the fury and visceral discord must come from somewhere; the album was inspired by a ‘psychotic episode’ experienced by frontman Kiely in the summer of 2013. It was a period of emotional tumult, zeniths and nadirs, of time spent living in a tent and keeping company of essentially strangers. Dara explains “I ran away from my friends because they weren’t fast enough...just kinda gravitating to any energy.” Daniel and co, meanwhile, looked on with growing worry as they debated how best to address the issue. “To see your friend have a breakdown is really weird. [Retrospectively] in many ways it’s funny but in many ways it’s really not.” 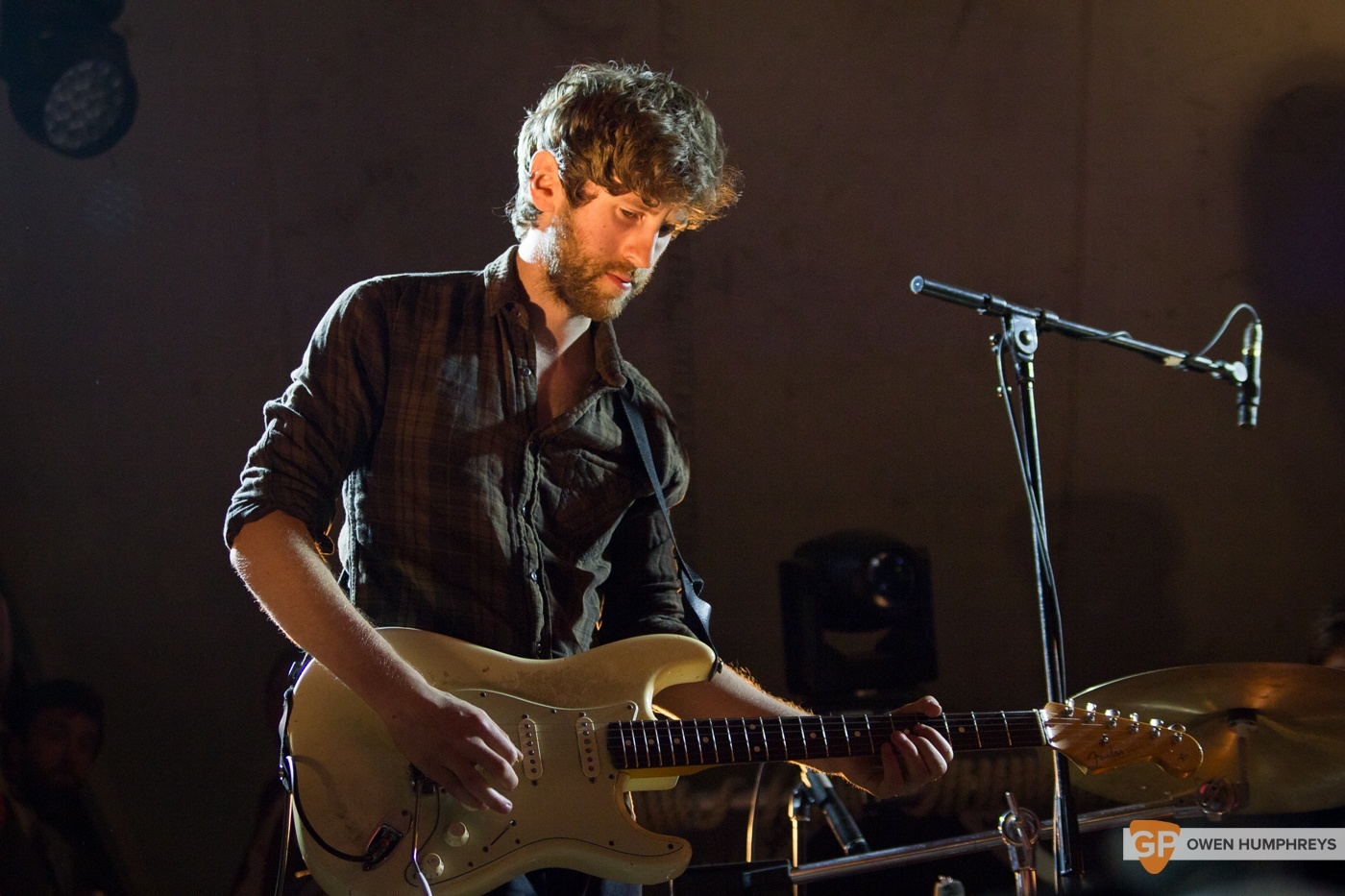 The pair have evidently turned the events over in their minds many times, for they navigate the discussions with frankness and staggering self-awareness. When they’re not occupied drawing dicks, the two are prone to astute and sagacious observations.

“It’s really cool to look back on it and kinda have a balance now.” Dara explains. The level of intoxicating euphoria Kiely experienced is nigh unfathomable to the uninitiated - Dara recalls believing he was a god who could control the weather - and though it sounds like something so astoundingly outside the realm of average human experience, he doesn’t deem it to be the best way to write an album. “It was kinda like an extreme version of myself on both sides, the most depressed and most happy, and it was the first time that all came out in any way, so naturally when that happens you kinda get a sense of yourself, but yeah, I wouldn’t recommend it, staying awake for nine days...” Ultimately, it’s not a sustainable approach. Daniel sums up the whole thing elegantly; “[Mania] is a castle built on sand.”

Though the album did, in many ways, spring forth from the episode, Dara is content remaining in the happy medium he has achieved. “The key high in life is peace of mind...finding a balance, and treating people the way you want to be treated.” He says, definitively, with a nod, a veritable floppy-haired Buddha of a man. “I think everyone should have a midlife crisis as early as possible. I say it all the time - I think you should buy your Porsches and shit when you’re 24, go be in a band when you’re that age and go for it.” Maybe more Ford Fiesta than Porsche on a twenty-something’s budget, but worth considering. 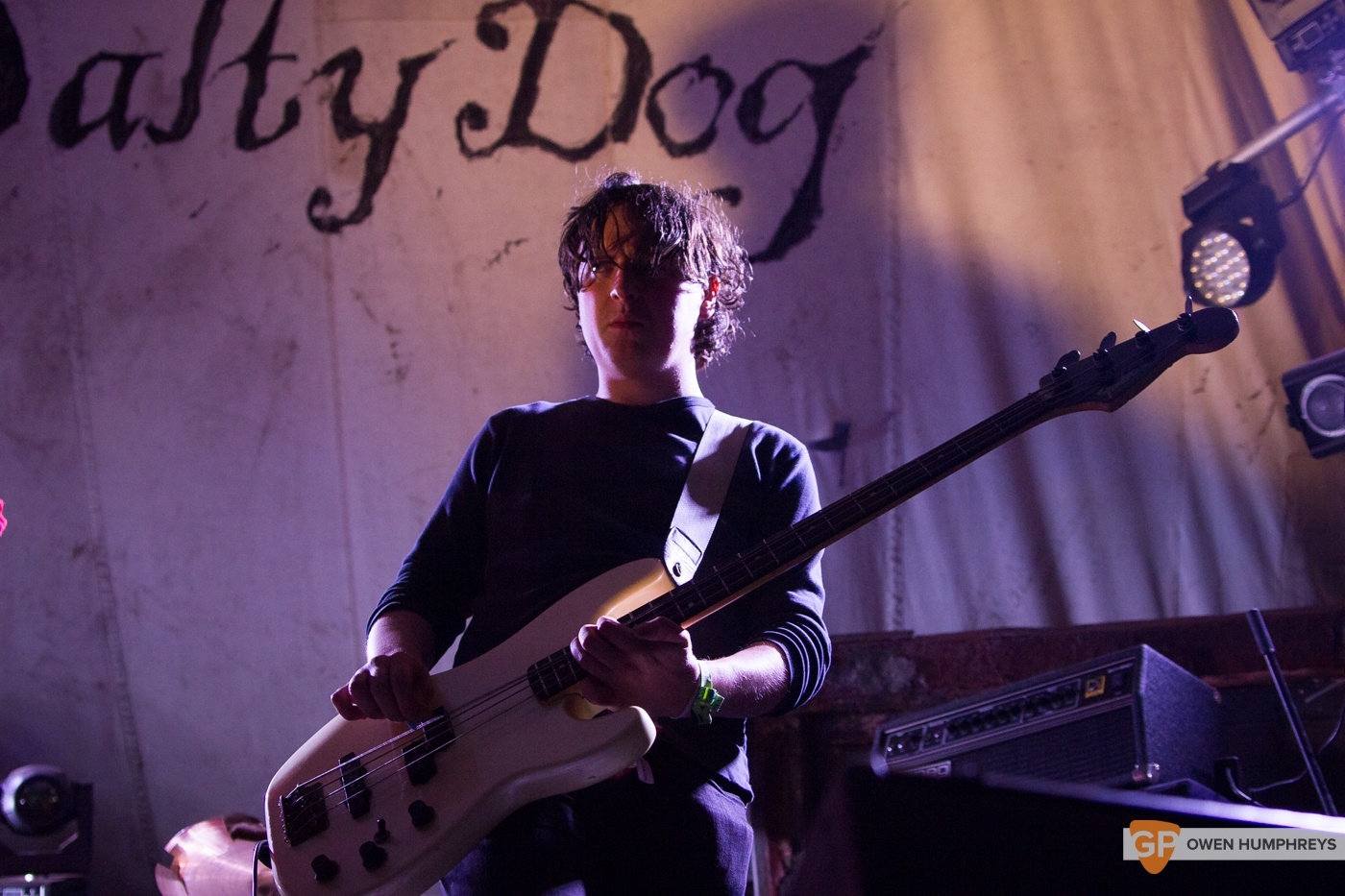 While the aforementioned ‘break’ is reaching near-mythical status, becoming inextricably bound up with Holding Hands with Jamie itself, “The music is just as equally about everyone else.” Daniel explains. Dara continues, without missing a beat, “Everything we do is like four ways, the best idea in the room and such.” Daniel, again (the pair have Laurel-and-Hardy level timing when it comes to picking up where the other left off) “I can only relate to Dara as his friend and same with the others and we were all there and we understand a lot but on stage...we’re not trying to channel his emotion, that’s part of his performance because it’s his life...but like everyone has things that frustrates them. If you wrote your part, it came from you; you’re expressing yourself just as well.”

If this 50% of Girl Band are anything to go by, than the outfit are just as intriguing as the album itself, riding the crest of their success and having a good time doing it.

“We’re all really hungry to get back in and write some music.” says Daniel “Making music is incredibly self-indulgent...it’s all about pleasing yourself and finding what you like, so sit back and enjoy it, and…” Turn on fuzz, blow minds? “That was sarcastic, when I said that.”