In this instalment of Everyone But The Band, Alasdair travels to Dalkey to meet Paul Sheehy and Brian O’Donnell, one half of Lotus Sessions, an online live music platform based out of FIKA Rooftop Bar & Restaurant on Bray seafront.

Lotus germinated “at the start of the pandemic,” Brian tells us. “We had all these shows that we were going to go to. It was the perfect summer then everything went to shit obviously so in my head, I was like, ‘how can we counteract this? How can I see live music again?’”

“We knew Greg [Kennedy] who Paul used to play with in Redwoods. They had a good bit of equipment. Sean [Daly] studied photography in IADT so we were like, ‘shit, lads, we have everything we need to do it without putting a penny into the thing’. That was the spark”. 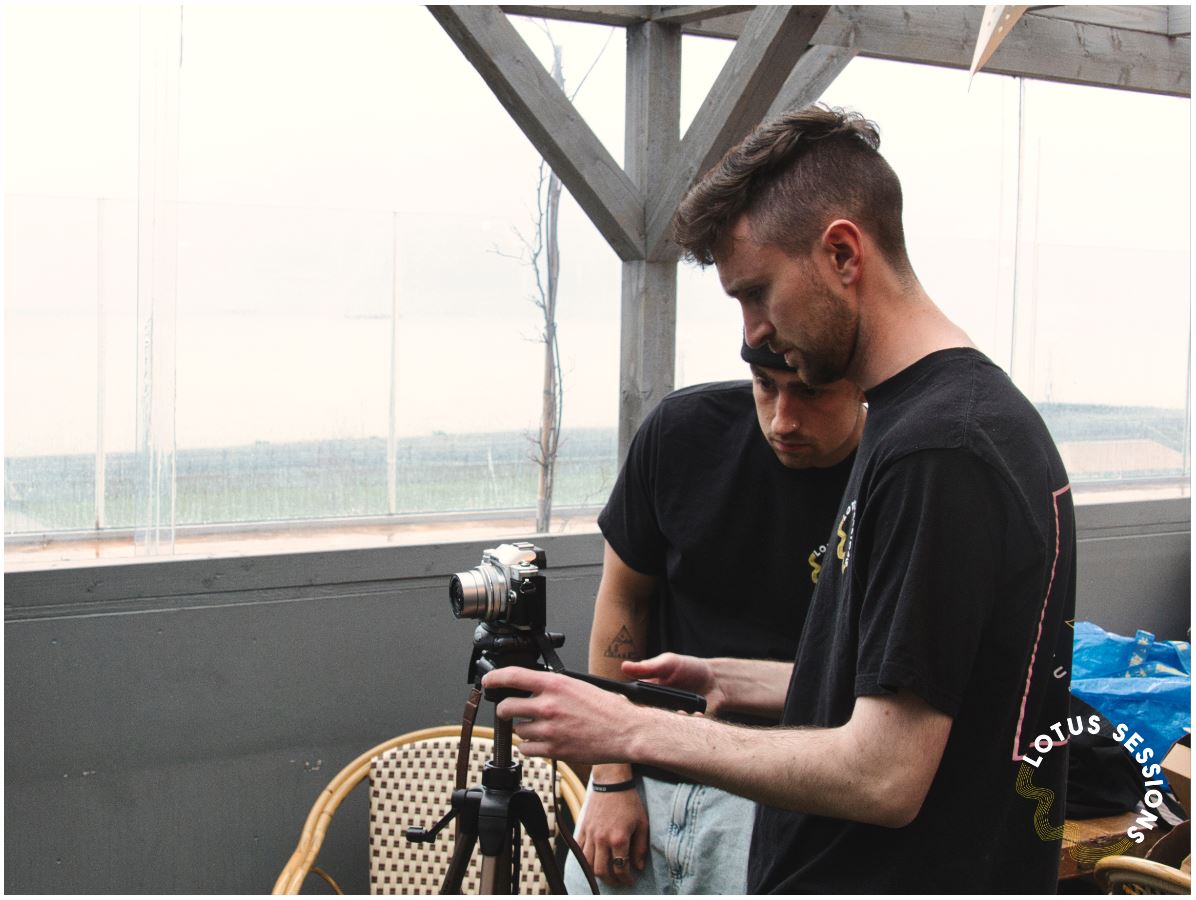 Since Lotus’ inaugural event in early June - a performance from Somebody’s Child - they have gone on to host Tung in Cheek, Elkin and Mute the TV.

They highlight the importance of playing good hosts. This is helped by the fact that most of the crew play music themselves.

“Paul and Greg had a really good understanding of the recording process. The two of them are intertwined. That’s the backbone of it all,” Brian explains.

“You know when you’re playing somewhere and the sound that you’re getting back is shit, you’re not going to play to the best you can. We want to make sure they’re comfortable with it,” adds Paul.

Brian agrees: “When they come in, we’ve everything set up, we’re ready to go. That’s what we take pride in and that’s why we can relax when everyone comes in and have that laid back attitude. That’s when we can take a load off ourselves and make sure everyone’s having fun”

The pair prefer to look at themselves as supporters, not bosses. “There’re no egos,” Paul sums up. 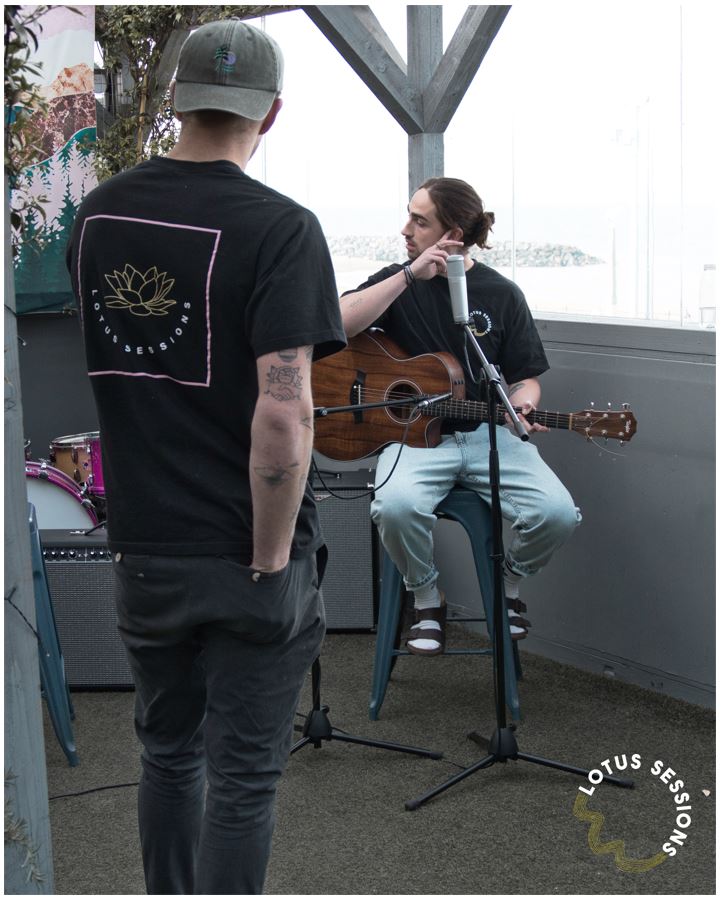 Their hospitality was helped, in part, by Paul’s experiences out in Da Nang in Vietnam, where he hosted an open-mic night.

“It was on once a week, so many people passing through the town that would bring their instruments with them and it just became a thing”. explains Paul.

“We had so many musicians from around the world, bringing mad instruments, so many different genres of music, I built up a lot of confidence hosting that... it would just turn into these big jams at the end of the night. That went on for months. It was amazing, learned a lot, met a lot of cool people...”.

Paul and Brian are affable and at home in The Queen beer garden behind Dalkey castle. They sit relaxed, smoking rollies and enjoying Jamie Gingers.

Paul happens to notice the actress, Elizabeth Banks sat at the table beside us. We reminisce about that scene in The 40-Year-Old Virgin.

As for one of the highlights of the trip, “a ten-piece ska band with a guy from London who used to support Madness. He was the drummer and the singer and him and I started the band”.

“We were called Looney Tunes. We had three weeks to learn forty songs that I’d never heard before so I played lead guitar and sang a few of the songs and we had a keyboard player, two guitarists, a bassist, five brass players, two saxophones, a trumpet”.

“We headlined a reggae festival to five hundred people. We played a German beer festival that was 1200 people. It was an unreal experience”. 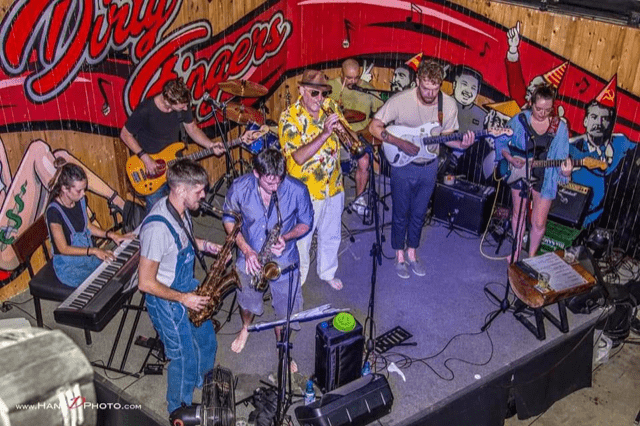 Paul can be seen playing the White Stratocaster in Looney Tunes' second show at Dirty Fingers, Da Nang (before they became a ten-piece)

Lotus pride themselves on their eclecticism and these two years certainly helped to open Paul up to new sounds and styles of music, as did Brian’s own time away in Montreal. Here, he spent time on an exchange through UCD where he studied French and music. He highlighted Festival international de Jazz de Montréal, the world’s largest jazz festival.

FIKA seemed like a natural fit to base Lotus Sessions. The duo, both from Greystones, reveal, “our beautiful friends, Romy Sheridan and Alan Hughes...” set up “...this gorgeous restaurant...on Bray seafront”.

“They open Wednesday – Sunday so when I approached them to ask, ‘what do you do with the restaurant on Mondays and Tuesdays? Is there any chance you’d be up for potentially letting us run Lotus Sessions?’ Without batting an eyelid, Romy was like, ‘100%. Whenever we’re not using it, that’s your restaurant. So long as when you’re finished, it looks the same as when you started, it’s all yours’”.

“We were so blessed. I don’t know if Lotus Sessions would have taken off otherwise. We would have had to look for a venue, pay for a venue. These guys were so accommodating”.

“The aesthetics fit so well with what we wanted to do with Lotus. We wanted to have a sexy rooftop scene where you’ve got the Irish sea in the background, the countryside”.

How did Lotus go from an idea to getting artists on board though?

“We did test recordings. December 2019, Paul and I sat in his shed for seven hours a day for five days." explains Brian, of their determination to get the production quality down.

“The test recordings were a validation to ourselves, we can actually do this, we can record really high quality sound and video to the highest quality possible and we can get recording artists interested in coming in to do a session with us.”

“The response we got was like, ‘shit, the sound quality is really fucking good’, we’d love to come in and play’.

August promises to be an exciting month for Lotus. “We’ve got a couple of hip-hop artists coming in, We’ve got funk. We’ve got classic rock. We’ve got indie rock.” and they are keen to expand their horizons further. “Any afrobeat bands out there, please Hit us up.”

Brian and Paul have been delighted with the response and outcome of their work to date and are getting an extra kick out of bringing musicians onto a stage again.

“Nobody’s played live music in so long that when we offer them this chance to promote themselves, they don’t hold back. They have given it socks. Every band that has come in, you can tell that they have rehearsed down to the nines”.

“It’s also energy that they might not have had before that has built up from COVID that they’ve released through the set because it’s their first time playing live music in so long. It’s a very special process to be involved in.” Paul says.

They’re visibly excited for the future and eager not to rest on their laurels. “This is exactly why Lotus Sessions is up and running. All of these people are so stoked to play. It transfers into the recording”.