The French love a good strike. And usually, from afar, I would support them in their quest for equality and commend their denunciation of the growing neoliberal elite. But, selfishly on this occasion, I can declare that the recent transport strikes across the nation were a right old pain in the hole when trying to get to Rennes from Dublin.

4 cancelled flights and one overnight in Paris later – we arrived in the picturesque capital of Brittany a day late. Unfortunately, this meant we were to miss the first night of the festival. Nothing could be done, just bad luck. The festival runs from Thursday to Saturday with the two big nights taking place on Friday and Saturday. So at least we had two bumper days of music to satisfy our craving.

GoldenPlec has been covering Rencontres Trans Musicales in Rennes for the past 5 years and each year the festival showcases the best new acts from all over the globe. In our reporting in the past, we’ve caught Lizzo, Benjamin Clementine, Shamir, Jungle, Janelle Monae and more before they became household names.

That’s what sets Les Trans apart from other festivals across Europe. Instead of going after the billboard names, they instead, have a commitment and love of new music to only book and promote new and emerging artists. The festival is always rammed with locals too, a incredibly impressive sight to behold when the ‘big names’ allude the festival line-up. The French punters instead choosing to believe in the reputation and quality of booking in years gone past.

The festival is located in an exhibition park, usually reserved for large-scale exhibitions and conferences. The park features 5-6 huge warehouse-like halls and each stage is set up within. Straight away, this eliminates the worry over weather, as you’re only ever a short 1 minute walk between halls.

It’s located a 15-20 bus journey outside of the city with shuttle buses running every 2-3 minutes from the city centre. Luckily, their transport system wasn’t affected by the national strike and the system runs perfectly across the whole weekend, really impressive.

Unfortunately, direct flights from Dublin to Rennes have recently ceased. But flights to Charles de Gaulle are only around €80-€100 return. Then it’s a comfortable TGV from Paris to Rennes (another €30-€50). A pretty quick and straightforward journey.

The festival only kicks off around 7pm/9pm and can run as late as 6.30am, depending on the night. So you have all morning and afternoon to explore Rennes and it’s dainty cobbled streets. You can take in the Christmas markets, pick up a savoury crepe from a street vendor, peruse the local record stores or kick back and relax in one of the cities quaint cafes.

Now on to the music – we’ve picked out our favourite acts that we caught over the few days: 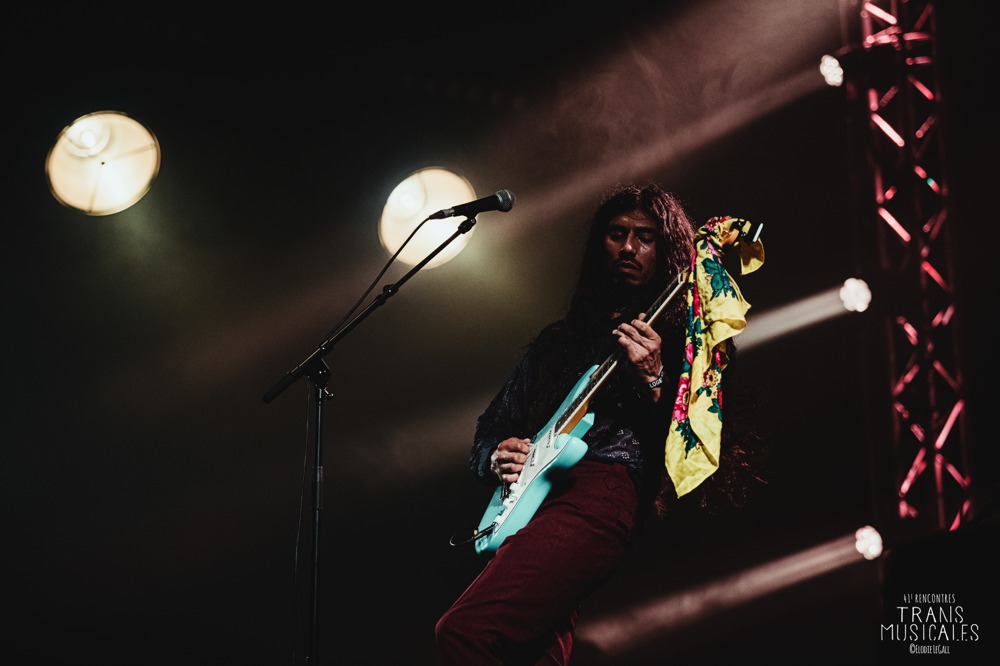 The first act to make an impression in Rennes was Gilberto Rodriguez y Los Intocables. A modern Chicano Soul singer and guitarist who is based out of the San Francisco Bay area. His set flows through guacanco rhythms, to mind-bending rumba beats. All meshed together like a South-American musical quilt with cumbia, rock, funk and acid jazz notes all to follow.

On the night, he showcases tunes from his debut album Sabor Maracuya Desnuda. Whether it’s the lengthy Totanita Encantadora with its chilled, laid-back flow, or the tricky playfulness of Navegando Verano. There is  a gorgeous playfulness and improvisation in all elements of performance.

The musicianship is truly impressive as the band offer up a style which harks back to the heyday of 60s and 70s psychedelic rock scene in San Francisco. 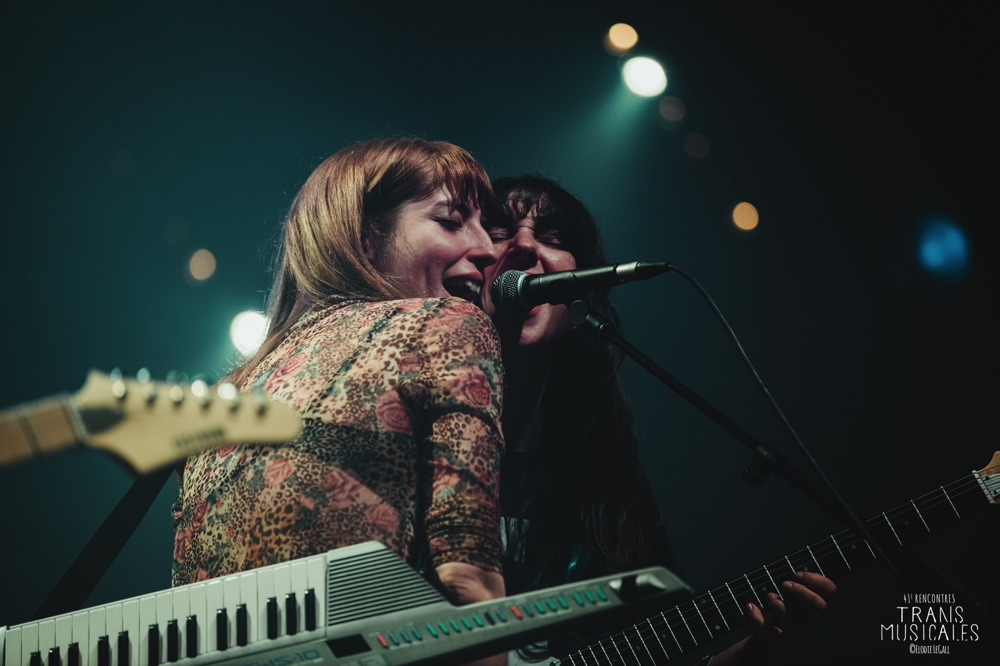 Los Bitchos are a five-piece psychedelic instrumental outfit with members hailing Australia, Montevideo, Stockholm and Croydon. The band are fronted by the mesmerising multi-instrumentalist Serra Petale on lead guitar.

They produce a brilliantly airy and tropical soundscape, most notably on their track Bugs Bunny. Their onstage performance is captivating and chemistry between the members shines through. One of their latest singles Pista (Great Start) is an instant hit and sees the 1,000 strong crowd react instantly. The ladies howl throughout and the driving guitar line sees Serra Petale and Carolina Faruolo stand back to back in a natural power stance as they riff out the main melody.

The crowd patter by Faruolo is engaging between songs, not least when she invites a percussionist on stage that they met a few nights previous on tour and asked to tag along with the band. The same can’t be said of the attempted crowd-surf from their tour manager in celebration of his birthday. No more a surf, than a plod in to the crowd. Nice try though. 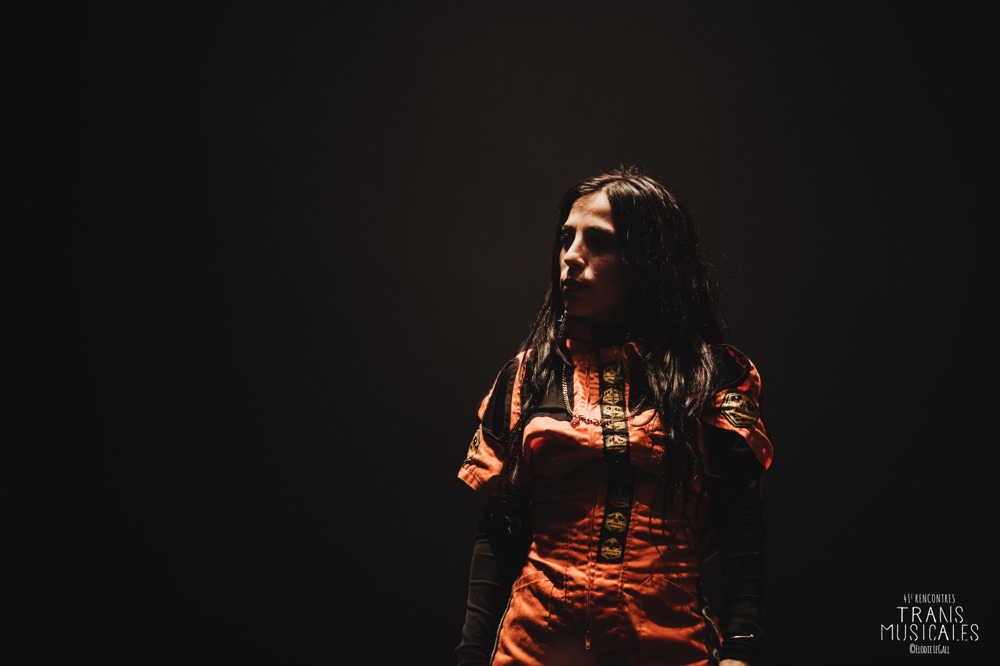 Much like so many of the acts on show across the weekend, it’s pretty common for an act to be a complete mystery to you. Of course, you can do your best to research the lineup before you enter the exhibition park, but with so many acts being newer artists, the recorded output of certain acts can be variable in quality, with some only having half-baked demos online. Tribade were an act that slipped through the net but having stumbled upon them, they soon became one of the standout sets of the festival.

Tribade are a trio of female rappers from Barcelona with a lot to say. They touch upon feminism, social empowerment, immigration and Catalan independence, and they’re only getting started. Resiste and La Purga are standouts in a set filled with memorable moments. Tribade use English to bridge the gap between the French crowd and themselves, often teaching the crowd parts of the song.

“I just want to point out that no person is illegal” declares Masiva Lulla, which receives a huge cheer from the crowd, before launching in to a performance packed full of energy.

“Do you like lesbian reggaeton?” asks MC Bitta before retreating behind the stage, only to return with balaclavas, as they bound around the stage for their final track. A vibrantly brilliant live act. 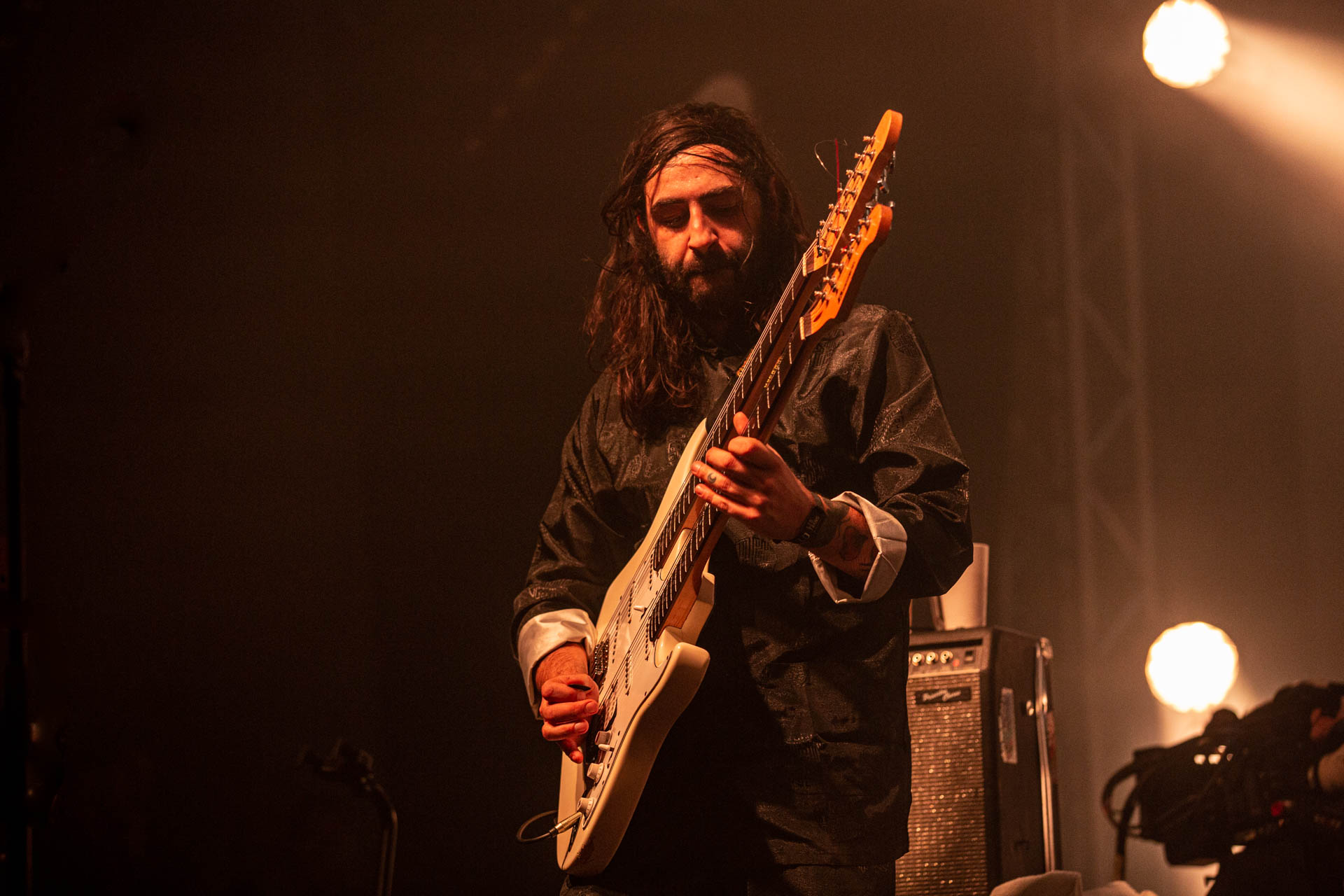 Yin Yin really impressed on the Saturday evening, showcasing a variety of psychedelic sounds. You can expect a blend of disco, funk and electro with an Asian tint to it all. The band have a clear chemistry between them and unlike some other acts on show, their musicianship and tightness as a band really shines through. There is hardly a missed note throughout the entire set.

Dis? kô Dis? kô is a really brilliant track, it starts out with a nod to the synth line from Donna Summer’s ‘I Feel Love’, that unmistakable Giorgio Moroder lilt being paid homage to. But soon, the YiN YiN sounds comes in with tinkling Asian notes littered all over it. A real patchwork of sounds, resulting in a incredible tune.

Mainly an instrumental act with little lyrics, this act would be at home on any festival stage the world over, such is their quality. While Los Bitchos the day previous showcase a raw energy in their instrumental set, YiN YiN show an almost perfect example of musical symmetry. 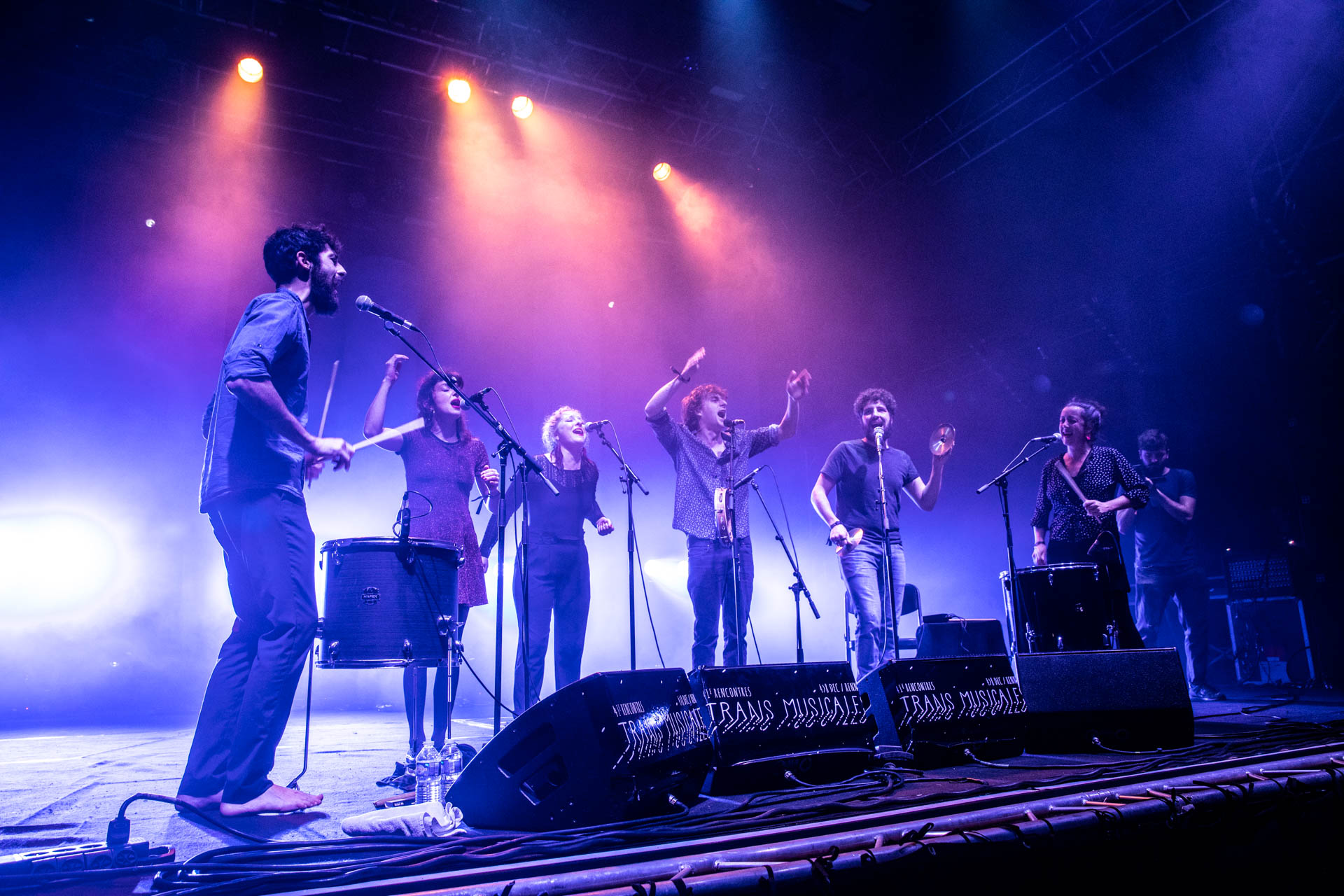 Trans Musicales really throws up surprises each year. Whether it’s Kuhn Narin’s Electric Phin Band in 2015, a psychedelic rock band made up of street performers from Thailand. Or Reykjavíkurdætur, a collective of twenty Icelandic rapping ladies in 2016. You never know what you may stumble upon.

While the festival is famed for promoting the best in alternative electronic music, rap, rock, soul and world music – San Salvador, a six-piece harmonic folk choir are certainly an outlier in the line-up.

What was to follow would be a masterclass in vocal polyphonic harmony. Six voices dancing together to make an other worldly collage of sounds, with two driving drums from either side creating a pulsating rhythmic backbone. The marrying of both female and male timbres is masterfully done with every single vocal line providing playfulness and experimentation.

They perform using the Occitan language, a language spoken across the Occitania region — mainly in southern France but also in northern Spain, in Monaco and parts of Italy. They layer each vocal line on top of each other to create an exhilarating end product. A truly mesmeric performance for any music lover.

So once more, Les Trans proves itself to be a shining beacon of light when it comes to supporting quality new music. A perfectly run music festival, a stellar lineup of acts, all based in the idyllic setting of Rennes. Les Trans is surely an ideal destination for any music-lover.

Sinead O’Connor at the Big Top

Shura at The Academy