Singers have a way of attracting a crowd, and tonight is no exception. In contrast to the select gatherings of previous Kirkoskammer concerts, tonight the theatre at Powerscourt is full and convivial, with every seat taken. The cabaret-layout of tables-and-chairs gives it more the feeling of a club than a concert venue, an effect only deepened as performers Máire Carroll (piano) and Sarah Shine (soprano) step out and take their places.

The programme’s theme is ‘matters of the heart’, making the two opening Schubert songs an easy, even conventional, choice. Hearing them in this space, though, frees them of any stiff concert-hall associations, instead evoking the intimate gatherings for which they were originally written. The light is low. Shine, about to take up a position in the Academy of the Paris Opera, may have been a student until relatively recently, but she approaches performing with a relish and focus that belies her years. Her eagerness to communicate is matched by a delightful voice that is already capable of delivering much, her rich lyric soprano covering a big range from a brilliant top down to warm lower registers.

After Schubert comes two Hugo Wolf songs, light and expressive, and then György Kurtág’s Farewell, ushering in a concentration and reticence with a finely-controlled performance from the two performers, Carroll’s playing elegant and hypnotic. Switching back to the breadth of Alban Berg’s late romanticism, Shine brings a lovely sound to these two songs, moving from gentleness to rich, exultant joy. The shared sense of focus and technical knowhow serves both performers well in the short Gerald Barry song (receiving its Irish premiere tonight), with Shine nimbly handling its extremities. An ode to mark the passing of Karlheinz Stockhausen, it’s appropriately matched with a similarly concentrated account of Stockhausen’s Klavierstücke III by Carroll.

After these, the delicious pungency of the Poulenc’s Hôtel is all the stronger, and a sheer pleasure. The cabaret-style of his two Aragon songs (C and Fêtes galantes) are an easy match to our surroundings, though the latter song’s insistent patter—always a difficult balance, given the brilliant piano part—is possibly a little under-sung here, but still gets a laugh. Henri Dutilleux’s San Francisco Night, calm and understated, is followed by a piano étude, Automne, by Cécile Chaminade, its piquant lyricism beautifully played by Carroll, championing this composer. Finally giving her partner a break from the keyboard, Shine nails a brilliant performance of Cathy Berberian’s famous comic-strip-inspired Stripsody, clearly relishing its opportunities for crazy mimicry.

The ‘heart’ that this concert is based around comes at the very end, with the world premiere of hEArt by Tiange Zhou, first-prize winner of the Kirkoskammer Composition Competition. Divided into three parts, it is performed at both ends of the room, as the performers move between the piano, plus chimes and megaphone, at one end (parts one and three), and a set-up involving toy pianos and lengths of PVC piping at the other (part two). Brilliantly inventive and engagingly eclectic, its playful energy is tackled fearlessly by the two performers. From looking to the past, we end up teetering giddily at the brink of something new, which is as good a place to stop as any. A great night, and one to remember. 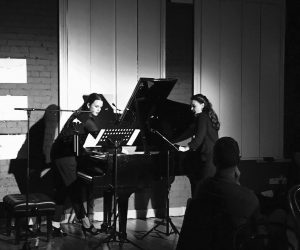 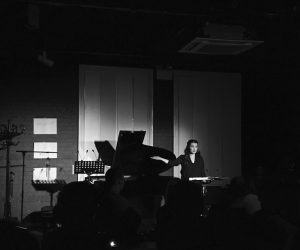 Explosions in the Sky at Vicar Street, Dublin