The Cork metal scene is ripe with talent, especially in the realm of doom/stoner metal. When it comes to musical output, local bands tend to either prolifically put out short EPs and singles or produce very sparsely. In the case of Cork's COROZA, the band has made a conscious decision to start their ambitions with a full length album.

Their 2017 self-titled demo allowed them to breach the scene, slowly but surely, but their debut album 'Chaliceburner' is a clear and concise mission statement. Before the release of the album on the August 31st (via Paranoid Beast Promotions), I was lucky to get an exclusive listen to their inaugural creation. 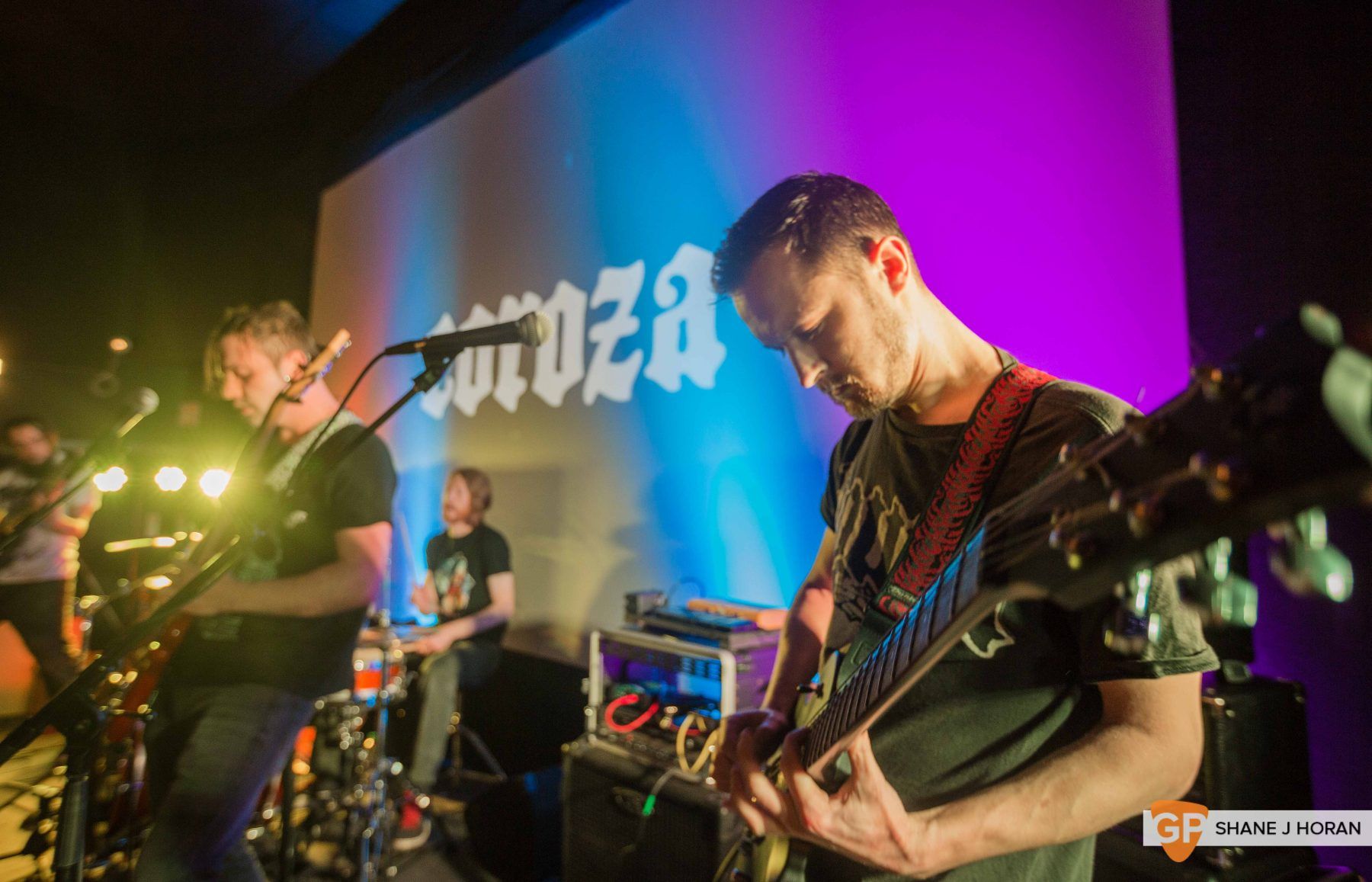 Coroza have played numerous gigs in the Munster region, having recently made their way to the capital and will later this year venture into the North, making a name for themselves as supreme stoner/doom merchants, however with an edge of complexity in their music. It would be unfair to place them among typical doom bands. There is musical ability and songwriting throughout this album, with genuine substance (not that substance per say) without any clear gimmicks or lazy attitudes to composition. Here is a track-by-track evaluation of the upcoming colossus.

The opening track to the album begins in atypical doom metal style, but then again that is the errand of the band. Without hesitation, the quartet invade the slow trudging tradition of their adopted genre style, with faster, more intricate touches in between. Before embarking on traditional stoner metal composition, the title track begins with a drum arrangement decorated with ghost notes and up tempo grooves, complemented by low end driven guitars and bass that slowly incorporated the almost bluesy feel of old school stoner metal, akin to what you might hear on ‘Masters of Reality’.

The opening drum piece is a precursor of the playing that is to come on the album, only becoming more and more baroque. The various vocal styles describe an astral occurrence, using terminology that is to be expected with the genre, however this is no complaint. As an opener, it expresses all the ingredients of what is to come, however the band is not finished and each track that follows the first becomes even more and more ambitious in every aspect.

“The Plutonian Drug” begins with a slow, wading bass line, only to be followed by the guitars and drums. However, a change in pace is followed swiftly, with the drums guiding the guitars through a stampede of blast beats, stabs and fills. In an almost prog rock fashion, not unlike something you may hear in '70s space rock (a fitting reference). Later riffs incorporate extended time signatures, full band fills and guitar leads that creep in and out.

Towards the second half of this 18 minute journey, the pace returns to a trudging knod-fest, without any over reliance on one particular riff, but many movements and well thought out additions. This is what separates Coroza from other bands within the doom metal compass, the acknowledgement of power within slow tempo, but not used as a stunt. There is musicianship, even in it's simpler moments.

The band do however enjoy the final 5 minutes of this track, gradually forcing the main riff to become more and more lethargic. Like a record being slowed down in real time, it is also a specially superb moment in their live set. 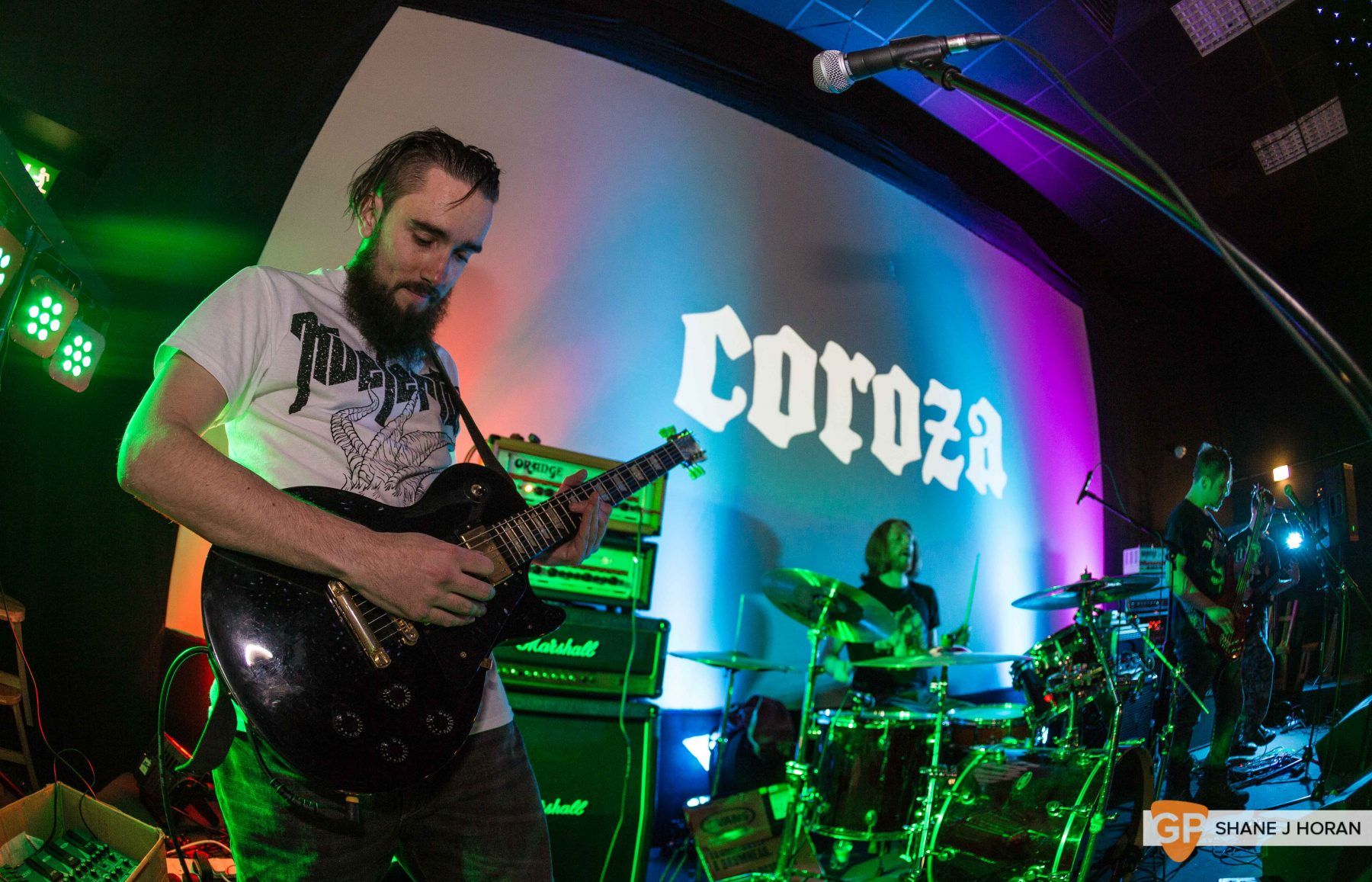 The only instrumental on the album, “Scaltheen” is not a filler track and should not be ignored. Having already been released on their demo, the track is familiar one to fans, but the age of this song has allowed the band to revise its details elaborate them even further, adding extra harmonies, lead tracks and experimentation.

A very welcome surprise occurs during the more relaxed section of the piece, where the albums producer, Ciaran Culhane makes a guest appearance on the saxophone. Cleverly staying completely within the context of the song, the brass adds a new dimension and layer to the track, especially where the absence of vocals can be filled. It is by no means contrived, and allows the band to conjure a very satisfying King Crimson feeling, a moment of tamed chaos. A swift 10 minute track passes with ease, as we are concluded with the best riff of the song, a certain crowd winner in any venue.

It is at this point in an album, I generally find myself hoping that the artist does not fall into the usual trap of throwing in a filler track. In the case of the superbly named "Mountain Jaw", this song is a standout. Beginning almost in extreme metal fashion, we are met by blast beats and tremolo picking. The groove ridden design of the verses separate the song from the rest on the release, giving it a more traditional song structure, yet it does sit well on the release. In no sense of the word is this lithic jawbreaker lazy.

At times sounding similar to early Mastodon, I even catch clear latter-end Celtic Frost sounds, intentional or not. Unlike the other pieces, there is an unforgettable refrain. I am a big fan of their choice to incorporate blast beats in the middle section of this tune and reincorporate this fast-slow-fast blueprint to a song. It adds more brutality to the album overall, ensuring the music as one piece of art is not written off as a relaxing odyssey, but at times a fierce incursion.

This final track could be their magnum opus. I was already familiar with this from their demo, but much like "Scaltheen", the band have elaborated the song even further. Already a long piece, the revised album version adds 7 minutes to a grand total of 20 minutes, an aural venture. With layers of acoustic guitars and incorporating even more leads, all is correctly placed.

Upon arrival, the core riffs are among Coroza's best. The verses and choruses allow for a call and response between two vocal styles, accompanied by intricacy on the drums (with the great addition of simple yet effective cymbal chokes). The final act of the track completes the 'Chaliceburner' journey. A mandatory guitar solo bridges the listener onto perhaps my favourite Coroza riff, played until the end, as all fades into a barren atmosphere, where an eastern styled acoustic movement concludes their entire campaign.

This album should be held up as an album that transcends a local band ethos, even in its artwork, done by the talented Mat Miller, and it’s overall production. This is not to say that DIY or smaller releases are a bad thing, but it is refreshing to see a great band make an attempt at creating an absolute album. While modest, Coroza have managed to acknowledge that their music is worthy of such an ambitious release, and not settle for putting out a half-hearted release for the sake of it.

'Chaliceburner' will be played in its entirety live on the 31st of August as part of the Paranoid Pit with Elder Druid and The Last Vinci also playing on the night. Special thanks to Coroza, Con Doyle and Mark Morrissey. Chaliceburner will be the first album to be released and distributed by Paranoid Beast Promotions.