Every month, OSLO in The Workmans Club in association with GoldenPlec, presents some of the finest talents in Ireland for a one-off free show.

This month's OSLO is a two-for. Milk. and Bodies are taking to the stage tonight and we caught up with them to do a quick-fire Q&A to get to know them better.

Mark McKenna of Milk. and David Anthony McGeown of Bodies spoke to us about new music, their favourite Irish venues and worst trends they took part in.

First up, we chat to Bodies:

GP - Bodies, last time you spoke to GoldenPlec you called your album 'Drench' a "low concept album" - what is your favourite concept album?

My favourite concept album is "De-loused in the Comatorium" by the Mars Volta.

I'm a huge Mars volta fan. I go through a period every year or so where I can't listen to any other music except TMV for a few weeks.Nothing else sounds like music."De-loused...."

It's mostly about the dreams of a man who was in a drug induced coma and woke up only to jump of a bridge committing suicide(sadly based on their close friend Julio Venegas). My favorite part is how they musically portray the character jumping off the bridge in "This Apparatus Must Be Unearthed". I feel like I'm falling as I listen.

GP - Bodies, also in an interview with GP, you spoke about your mental health and the presence of that thematically in what you write, do you ever find it difficult to bring the songs you write about something so personal to the public sphere?

Honestly, I have no problem being open with issues I have through my lyrics . If a song I wrote helps one person then it'll be worth it. Even without that one person it helps me to write, so it's always worth it.

The difficulty I do have is trying to get across the messages in those songs both poignantly and tastefully in equal balance. And to find the truth of how I really feel. It can take a very long time to finish what seems like a simple lyric. The other problem I occasionally have is when performing songs about painful issues live. It's hard not to relive the mindset I had when I wrote them. For this reason I'm starting to incorporate more fiction into my writing.

GP - Talking about writing, back in February you posted a video from the studio, does that mean you're working on new music?

Haha nice detective work. You're right though, We're currently recording our second album, again with David Prendergast. Hopefully it'll be done by the summer.
But as well as this I set up my own little studio in February and we decided to self produce & release what we're calling a 'mixtape'. Which is essentially an 8 track mini album of reinterpretations, live mashups, originals & collaborations with a few musician friends. It was so much fun to do. It'll be released on May 1st.
What do you consider to be the biggest challenges of the music industry, Bodies?

From what I've learned from friends in different bands, there's different difficulties depending on your genre and level of success and what you are looking to achieve. Being financially stable is probably the most important thing because it's what allows you to create music, so i'd say it's the biggest challenge, especially now as, to put it lightly, streaming platforms pay-out models do not favour smaller independent artists.

GP - What would be your dream supergroup, Bodies?

I'm going to expand a little on the conventional 4 piece band set up,

I'd also like to have Mike skinner(the streets) for the odd dropped in rap verse.

Thinking about it, It'd probably be unlistenable.

GP - And your first and last albums your bought?

GP - What is your most unpopular opinion?

That led zeppelin aren't that great /Bon Jovi are actually really good. I've come to learn they're both equally very unpopular opinions in my peer group.

Now some Q's for Milk.

GP - You just released 'Drama Queen', tell us about the inspiration behind the track and the recording process.

The inspiration behind drama queen was some of our life experiences and a desire to start a band.

'Drama Queen' had the same recording process as all of our other stuff - We begin with Logic sessions of demos, which we take to our producer Adam Redmond in Flaked Studios. Most of the writing and recording process is done with laptops.

GP - What are you plans for the near future?

We’ll be releasing a couple more singles, and then an EP later on this year.

GP - And your dream collaboration?

GP - What were your first and last concerts?

Now some Q's for them both:

GP - What is one trend from the past you wish was still around?

Bodies: That old trend where people actually listened and tried to understand each other rather than just condemning someone for having a different opinion. I think it falls under the bracket of 'kindness'. I think this trend is due a comeback.

GP - What is the worst trend that you have taken part in?

Bodies: Do you remember the very brief "nu-rave" trend? Electro House remixes of indie songs, luminous colors, skinny jeans and HUGE runners. I was a very neon teenager. Skins season one is still great though . Sid & Tony 4eva <3.... Actually, I think nu rave is also due a comeback.

GP - What are your most embarrassing songs on your phone?

Bodies: I don't have Spotify or any music downloaded on my phone. So probably my whispered acoustic cover of Aslan;s "crazy world".I recorded it for a girl who I was seeing. She isn't from Ireland & heard it for the first time while drunk on new years eve and was so touched it drove her to tears and into my arms. Which I found hilarious. She was crying and I was laughing so hard over her shoulder. A Beautiful moment. I'd heard the song so much my entire life I'd never really paid attention but It's actually a great song. I couldn't respect Aslan more.

Milk: Anything by Phil Collins.

Bodies: The Workmans for sure. As both a punter and performer.Great staff, great engineers, great music, both live and the djs.

Well, that's a good thing that tonight's event is in The Workman's then. Get down early tonight, doors at 11, and treat yourself to a night of fantastic music for free. 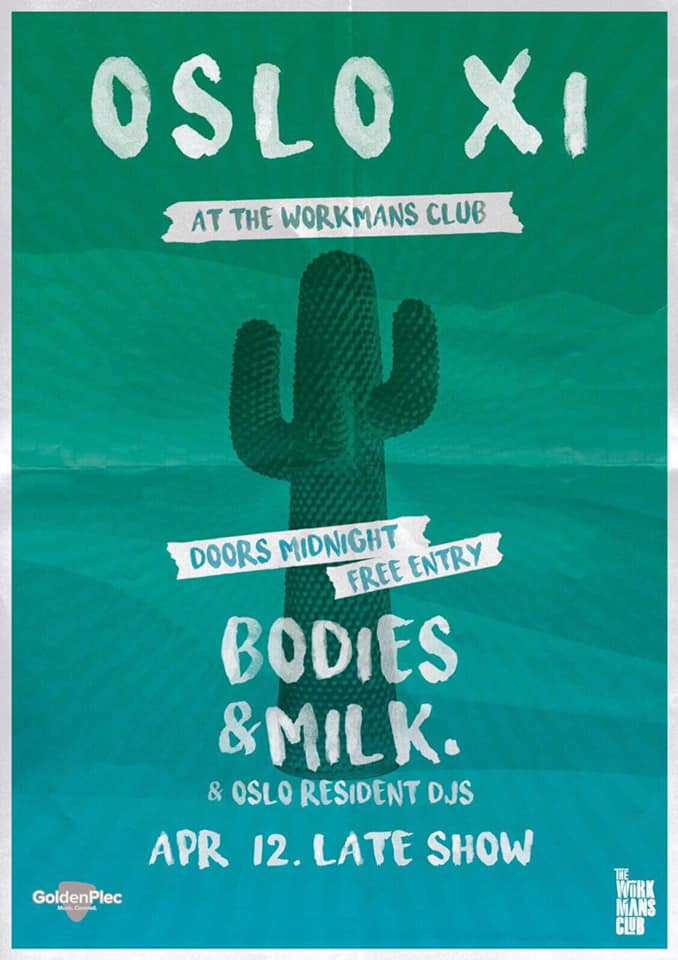