In the last few years, Zaska has become one of the most talked about artists in the Irish music scene. With his debut album, 'It Takes A Village' released in early 2019, followed by performances at The Button Factory and Lost Lane, Zaska is now bringing his show to OSLO x GoldenPlec's event at The Workaman's club this week! (Friday 17th May)

This time however, there's a difference - this evening's show is going to be an instrumental endeavour! Ahead of the show, we spoke to Zaska about choosing to go instrumental and the experience of releasing a personal concept album.

// GP: You’re doing an instrumental show this week, what brought that decision on?

It's something we've wanted to try since the Stankstrumentals EP we released. It just seems to make sense as the band is essentially a rhythm section with loads of different singers / horn players joining us so its a lot of fun just to put the rhythm section into the fore ground for once :)

Also means we can be a lot more free with the arrangements and go a lot more CRAZYYYYY!!

// GP: You’re also going to be playing new songs, what can you tell us about that? Is this all leading towards a new single/EP/album?

Yup, were doing one new original and then 1 new cover and a few different arrangements of stuff from It Takes A Village. Yup this is defo leading towards another release but when that may be is another question :)

// GP: You released ‘It Takes a Village’ earlier this year, how was the recording process with that? and how have you found the reception?

I'm so stoked with how the release went, so many great reviews of the record [you can read GoldenPlec's review here] and lots of shows and deadly opportunities have come out of it. The recording / mixing process was insanely long with it as I had my perfectionist hat on with everything. Even though a lot of it was live I think the next recording will be a bit more raw and gritty.

// GP: You worked with a lot of other Irish musicians for it, it seems, was that something you set out to do or did it just happen organically?

Yeah, there were over 25 musicians on the album! It's not something I had originally intended but I knew so many awesome vocalists that it just made sense to try out! Mad props to Jess Kav from Barq to suggesting that we try a similar thing to Snarky Puppy's family dinner record, thats where the idea came from :)

// GP: How did some of those collaborations come about?

// GP: Is it hard to bring in other artists to work with, if you have to let go of the reigns a bit, when it’s such a personal project?

With this album I had 95 % of everything kinda worked out exactly so most of the time it was just a case of getting them in to play exactly what I had written. But even with such strict instruction they would always put their own flavour on it and bring it to life more than I ever could.

// GP: ‘It Takes a village’ is a concept album, was it a bigger (or different) challenge to previous writing endeavours? What made you want to do a concept album?

One reason is that musically each song is so different sounding with all the various guest artists that I felt like I needed something to tie all these crazy parts together! I was also so inspired by 'To Pimp a Butterfly' by Kendrick Lamar that it made me want to try doing my concept record. KING KUNTA DA MANGGG!

// GP: With how music is consumed now, were you worried about creating an album like this  - were you concerned about people only listening to a few songs, or not listening to it in order etc.? Did that impact the writing/recording process at all?

I never really thought about it too much to be honest! It's definitely quite a long release at 16 tunes in total but It just felt like I needed them all to tell this particular story and get the concept across and didn't really care about anything else. I imagine my next release will probs be a little shorter :)

// GP: Not only a concept album, but also very personal, did that bring any bigger (or different) pressures with it?

I was definitely a bit nervous about sharing such personal stuff like the soundtrack to my wife giving birth and some of my anxieties I went through becoming a dad / being a musician but I think the album wouldn't be what it is without those vulnerable moments!

// GP: How do you currently feel about the Irish music scene as a whole?

For such a tiny country I really feel like we have one of the best music scenes in the world. It's just in our blood and it's incredible how much live music there is in every city and at every festival. Having said that it would be incredible if more alternative Irish musicians could get decent slots on main stream radio / television / festivals. But all in all it's a pretty incredible buzz around at the mo!

// GP: What’s your favourite Irish festival to go to and one to play? Which festival are you most looking forward to this year?

There are so many awesome ones but My fav is probably Knockanstockan :) So homegrown and uncommercial and I love that it's pretty much all Irish bands at it. Cant wait to bring the stank there but also really looking forward to Beatyard too! 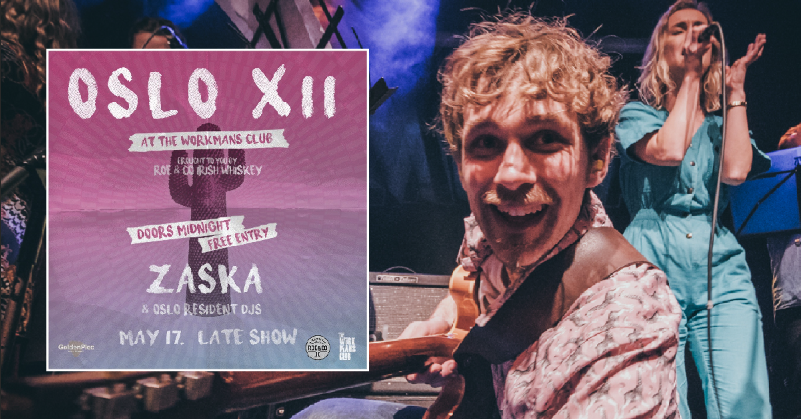