Ten years ago to the day, Delorentos made an announcement that shocked many across the Irish music industry. Despite a Choice Prize-nominated debut album and the majority of a highly anticipated second album complete, the lads had decided they were to go their separate ways after the sophomore record’s release.

In the years that followed, the band cited pressures surrounding the collapse of a record deal due to the recession as well as some personal grievances as the major driving forces behind the split. They had begun, Ro in particular, to fall out of love with music and needed a change.

However, the decision to carry on and finish recording that second album, ‘You Can Make Sound’, was an important one. The band went back to basics. Recording with the sole purpose of creating something they loved and felt represented them best helped to rebuild that love and, a little over two months after the break-up was announced, Ro changed his mind. 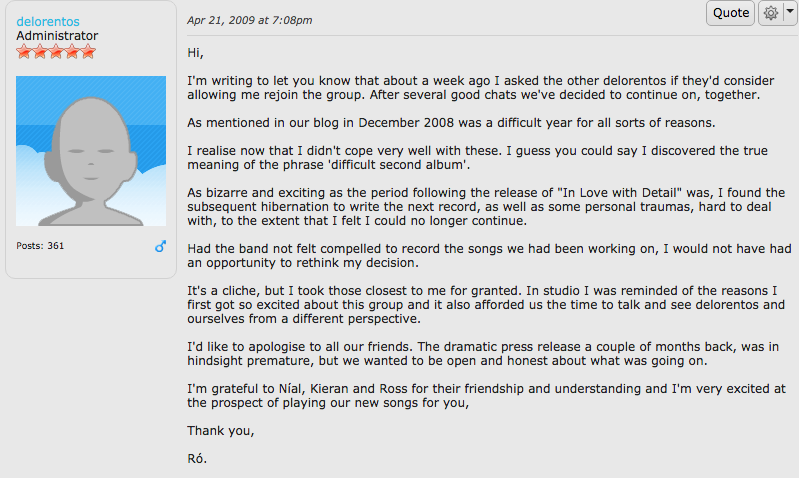 Since then, Delorentos have not looked back, with ‘You Can Make Sound’ debuting at number two in the albums chart and third album ‘Little Sparks’ winning the Choice Music Prize. The critically acclaimed ‘Night Becomes Light’ followed, while ‘True Surrender’, their latest offering, is once again Choice Prize-nominated and has just been picked up by a US-based record label for release over the pond.

Needless to say, the Irish music scene has benefited from that decision to keep the band going in 2009. We gathered some of the folk from that industry to talk about how Irish music has profited from Delorentos in the ten years since that fateful day and discuss some of their favourite memories of the band.

“Any band that manages to hold it together, survive, and successfully release music for as long as Delorentos deserve a statue erected in their honour. If you’ve followed this band’s career, you’ll be very aware of their ups and downs.

“The fact that their current album contains their strongest work should serve as inspiration for anyone who’s making music, and invariably reaches one of those crossroads, and puts those questions to themselves; What am I doing? Where to next?

On his favourite album, Hegarty said that “‘You Can Make Sound’ is a chapter in Delorentos’ career that doesn’t get talked about all that much these days. Consider songs like I Remember, Sanctuary, the stunning You Say You’ll Never Love Her, and the title track; it’s a special album”.

Paddy McKenna says Delorentos have benefited the Irish music scene “just by being around and making great music”.

“They magnificently trolled us all, before trolling was really a thing, back in 2009 when they dropped the bombshell on their Myspace profile (!) that they were done with music after one massively acclaimed album! But back they came and thank God for that because they’ve created five memorable albums since, each with stand out moments.

“I think their latest album True Surrender, in particular, is a real triumph because it showed that they were still evolving. It’s up there with my favourite Delos records. It’s a very emotional listen, soulful in a way that I didn’t think was in their arsenal. It’s more electronic and experimental than anything they’ve done before and yet, it’s also warmer and more intimate. Some achievement.”

One of his favourite memories of the band is when Paddy was doing a show on RTE 2XM called Dance Monkey Dancy. “It was ramshackle as hell, me on the desk running all the mics and not really having a clue what I was doing. I asked Kieran and Ro to come in and co-present the show with me. We had a feature called Nursery Rhyme Redux which was bands doing their versions of nursery rhymes. The lads did Twinkle Twinkle Little Star and it turned out really lovely and atmospheric. Rick O’Shea heard it and played it on his 2FM show a few times. I still have it on record and I played it for my kids to help them sleep. Didn’t help, but it’s still a good tune.”

“I remember seeing them do an acoustic version of Bullet In A Gun, recorded in Spain in this beautiful square, with Níal bating away on an empty acoustic flight case and the rest of the lads slapping their thighs to the beat. It’s a beautiful version of that song.”

“I first saw Delorentos in March 2005 in The Olympia. Officially I was there to see Jove (who became Royseven). When they started to play I was immediately drawn to the stage. From that moment I was hooked. I tried to get to every gig I could. My mother even drove me down to Cork for my 19th birthday with them in An Brog.

“When the news hit that they were splitting, I was heartbroken. I full on sobbed my heart out. I had only bumped into 2 of the guys in the street the day before they announced it and they had just come from the discussion (not that I knew at the time)

“I have seen these guys play in a room with literally 6 people there apart from the bands that were playing and have seen them play to full tents at festivals. Now they are off playing their music in so many different countries and I am delighted for them.

“Delorentos have always had a special place in my heart, they are salt of the earth hard working guys and I love them and always will.”

“Having the four guys still around 10 years on has benefited the Irish music scene a great deal. The Irish music scene has always been strong and diverse in our opinion. Delos are a great example of a band evolving over the years sonically and lyrically throughout their albums.

“They have always been the captains of their own destiny and they are a very inspiring band to anyone in this country that’s in a group. I’m sure they’ve inspired many young people over the years to start up a guitar band. As the years go by, you notice bands calling it a day but then you look at the Delos and there still making brilliant music. It definitely helps us as a band to keep going, it’s reassuring that they are still putting out quality material.

“Writing and performing in a band is a strange type of work to commit yourself to for so long so we understand what you have to go through...trying to work it out in your head. But I’m sure we are all happy that 10 years ago they chose to stick it out!”

“We actually played our worst gig to date that night, but they [Delorentos] managed to stick in my head. The way they went about themselves professionally and how they could pack out Whelan’s soon after that was very inspiring to watch in those early years.

“As a band, we were total messers at the back of the class who didn’t listen, so as time went on, we learned a great deal off Delos. It was the birth of MySpace and the unsigned band tag was no longer a bad thing. The DIY ethos was emerging in the mid-noughties and Delos were leading the charge.”

In terms of favourite memories, D’Arcy recalls Ham Sandwich playing Tom Petty’s I Won’t Back Down with Delorentos at a show a few years ago. “Ronan plugged out his lead and plugged me in to take the guitar solo. It’s up there with the most rock’n’roll moments I’ve had haha!”

Anyone who even half listened to Phantom 105.2 FM around 2007 will have been very familiar with The Basis Of Everything and Eustace Street. That was how I was introduced to Delorentos - a Dublin band that I could proudly shout about from the rooftops.

“Their debut album ‘In Love With Detail’ was the sound of a band who were eager for attention. It was hard not to be sucked in. The tracks on the album were catchy and immediate, heavy with guitar hooks and featured the soaring emotive vocals of Ro and Kieran.

“I saw them perform for the first time at Electric Picnic 2007 and realised then that not only did they have the songs but also the emotional gateway. Hold on tight everyone, these guys are going straight to the top.

“So you can imagine the collective dismay when news broke that the band were splitting up. What!? Why!? Surely this can’t be true. Like, our love affair with them was still at the ‘getting to know you’ stage. Myself and my friends snapped up tickets to that ‘final ever’ Delorentos gig in Whelan’s in May 2009 and made plans to see them for the last ever time - little realising that in fact, we would have plenty more opportunities!

“Whelan’s that night was packed. It was sweaty. And everyone who was there shouted out the words to each song as if it actually was the final waltz - for a band which, looking back now, was really only getting started. Was that really 10 years ago?

“I think Delorentos have a set a great example to all up and coming Irish acts. They have always been pretty inventive when it comes to promoting the band.  I loved the approach they took with Little Sparks, selling the album from their own pop-up stores. It just made the whole process of sharing their music with fans more intimate and personal. They are a band who have always stuck to their guns creatively and have shown you can have a successful career with or without a label.

“Going on tour with Delorentos was a great experience. We got to play some amazing venues all around the country. Playing the Olympia with the guys was definitely a highlight. I remember the atmosphere and the amazing energy of the crowd as they closed out the show with S.E.C.R.E.T. It’s a tune that just makes you feel good. You can’t help but bounce along with the crowd.

“The guys have an amazing bond with their fans. One thing we noticed on tour was that a big priority for the Delo boys is spending time with their fans. After every show they head into the crowd and just hang out and chat. It’s clearly something they enjoy doing and it’s really nice to see.”

“There’s a mysterious evolution with Delorentos. They develop sounds, procrastinate about clever lyrics and produce a unique yet beautiful product consistently.  They deserve to be exalted, appreciated and celebrated. Four gentlemen that chose to embrace a unique sound and capture the hearts of Ireland as a consequence. When we look back in 20 or 30 years their music will be celebrated as influential and an example of how to make things work.

“The lads sent me a postcard years ago while they were on the road. It got damaged in the post and somehow the postal service managed to stick it together and get it to me. It’s been on my desk for four years. Moral of the story, you can tear apart the Delos but they’ll always return together.”