Fort Worth native Leon Bridges rose to acclaim following the release of his breakout single Coming Home. A throwback to the golden era of R&B singers, names like Sam Cooke come to mind, and the track was and is a breathtaking debut. An album of the same name followed soon after, making Bridges a bit of an international sensation among fans of all things soul.

That was 2015, three years later the Sony music signee has released his second LP 'Good Thing', a project which hears the artist expanding and evolving past the original sunny R&B influence which earned him his status as one of modern soul's most promising talents. The transition from one sound to another can be difficult for an artist and even more difficult still for the fans, so we began our conversation by discussing the reception to 'Good Thing'.

"It's been mostly positive man. Of course, there are some people who wanted me to stick the whole '60s R&B style but it's mostly positive. I feel like me making this kind of album was an inevitable thing." Inevitable is an interesting choice of word there, one which indicates the artist might have had more contemporary styles in mind the entire time.

"Yeah it was definitely a conscious choice, but it was a natural progression too. When I hopped off the road in 2016 I got back in the studio back home and I was doing a lot of writing and recording. Those songs that we were recording, it was everything from a 1970s sound to a 1980s and 1990s R&B sound. We went out to LA and worked with this guy Ricky Reed for the project."

Strange then, that for an artist who was so closely linked with a specific era upon first discovery the concept of influence and inspiration remains hugely varied and almost subliminal. "I would say the sound on this album, in terms of cadences and melodies... It was a subconscious thing, always reflective of thing that I've just kind of picked up from folk, soul, rock&roll and R&B and so. My whole thing was how can I approach modern production with my vibe."

'Good Thing' is certainly an album with a modern production ethos. Tracks like Forgive You and Bad Bad News incorporate a broad range of contemporary sounds. While not a total departure from the vintage R&B sound, there's an undeniable hip-hop and nu-soul aesthetic to the whole production, complete with less guitar centred song structures.

Are changes were the result of a new writing approach?

"This was definitely a different approach. In the past, I've done a lot of my writing on guitar. This one was different, the producer that we worked with, he had a big library of instrumentals. Some of the stuff we worked on from scratch but a lot of it was instrumentals that he had. He'd play about 20 of them and I'd pick out the one that spoke to me most. That would be the one we'd work on that day. It started off by just creating the melody and how I wanted the phrasing to be and from there we kind of just formed the lyrics. I would say that the whole concept of the song was really just an afterthought."

One thing that hasn't changed for Bridges is the intimate quality of his material. His tracks aren't anthems, nor are they filled with huge bombastic choruses. The beauty of Bridges' music is nuanced, appreciated more and more with repeated listens. However, considering the artist's leap in popularity since his breakthrough single, he's had to fill bigger venues on tour. Bridges shared his thoughts on that transition:

"I recently hired this guy Josh Johnson and this cat Josh Thumberly on the bass. We basically reimagined everything on the album and some of the older material too. There are these moments of funk and of jazz and psychedelia. It's great."

As for adapting for larger venues, that's "definitely been one of the challenges. On our North American run, we hit a couple of small arenas and a few really big rooms and it's been a challenge to really give the energy to feed to the room. But it's all just a growing and a learning process. This European and UK tour has been great. We haven't been in some of these markets in almost three years so it's amazing that we can come back and play some of these bigger rooms."

Those who've seen photos of the artist often comment his distinct sense of style, which is heavily influenced by vintage pieces. What's interesting is how much the artist's visual presentation has evolved alongside his music. Bridges explains that "My style, has evolved over the years. When I first started out it was all about doing the traditional '50s and '60s style. Now it's all about finding pieces that are timeless. So I've been shopping with new designers while also incorporating vintage stuff too." 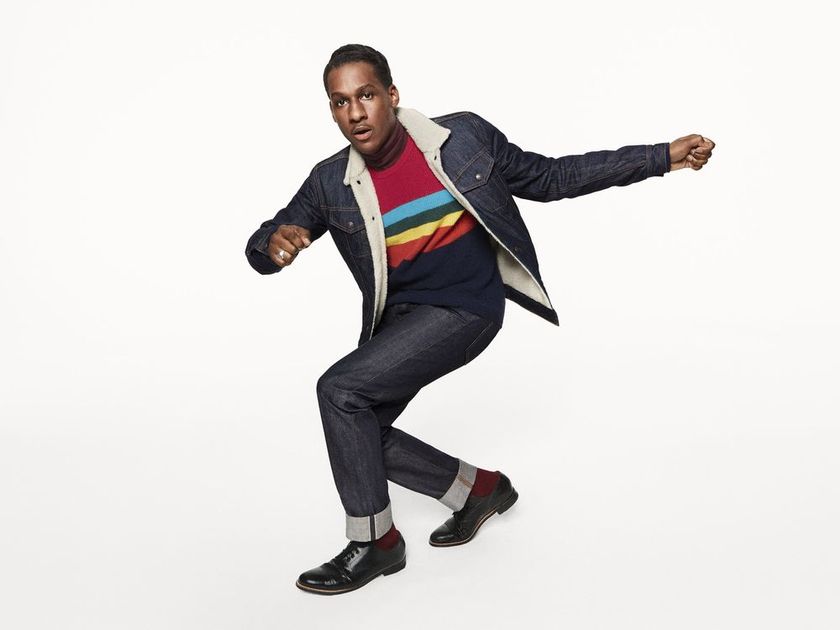 A shot from the recent GAP campaign.

So just how popular is Leon Bridges? Well if you want a reliable indicator, I was recently walking around Times Square and looking out from a 15ft billboard was Bridge's face, advertising the new GAP clothes range. On this Bridges laughs, "Dude, yeah it's crazy. I didn't know exactly when they were gonna roll out with some of that stuff. It's really cool to see some of my friends sending me photos of me."

If you're struggling to think of any other artists creating similar sounding music to Bridges that have managed to reach the sort of heights you'd need to for a giant clothes label like GAP to advertise your face on Times Square, it's because there isn't any. This is the ultimate testament to the Texan's huge talent. From a niche market to the heights of mainstream success, Bridges is one of the few remaining musicians who is bringing a true artistic vision to the masses. One beautiful song at a time.

Check out 'Good Thing' in full below.