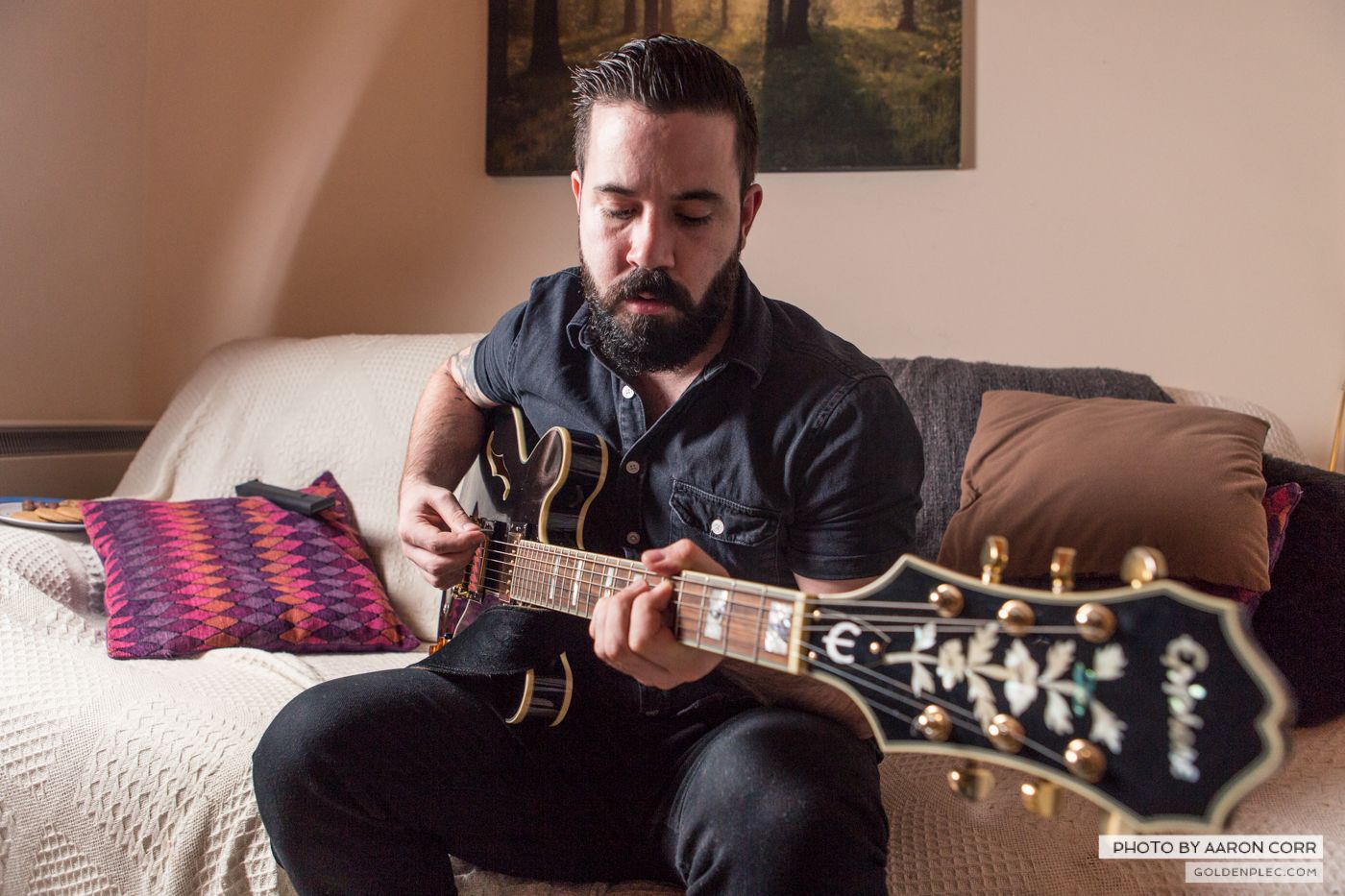 Jonny Lucey is the singer & guitarist in hard rock duo New Valley Wolves.  Alongside drummer Baz Joyce they are putting the finishing touches to their debut album due to arrive in 2015. We visited Lucey's home to talk guitars, pedals and amplifiers and find out more about New Valley Wolves. 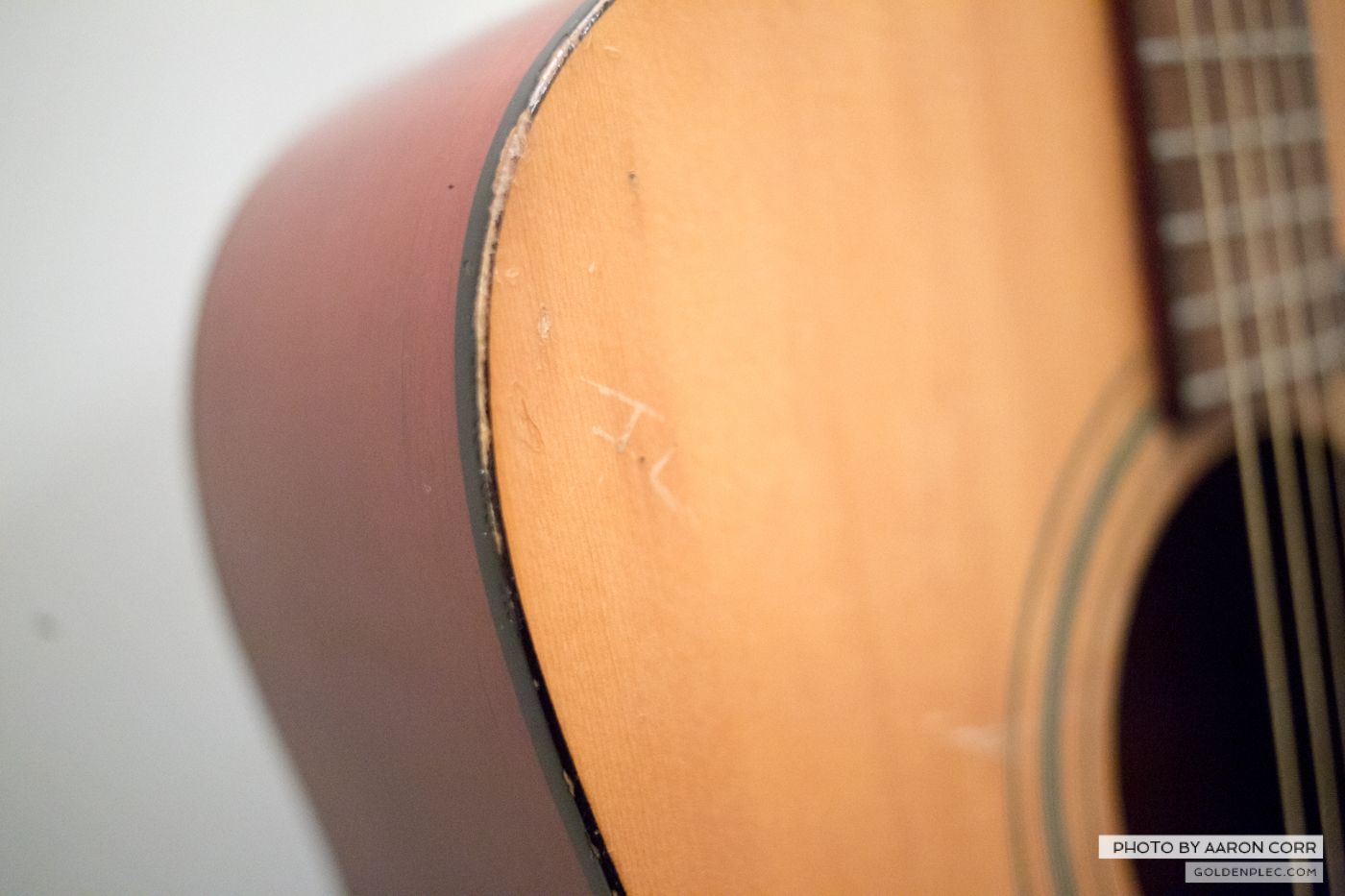 "I have been playing guitar since I was 13. Back then it would have been all Oasis and Blur, a lot of Stone Roses, a lot of Beatles, some Ocean Colour Scene as well, so those kind of bands, real guitar bands, Britpop bands. Now it is more Queens of the Stone Age and Black Rebel Motorcycle Club."

"I taught myself. I did not have a guitar for the longest time but a friend of mine did so I would kind of steal moments of watching him play and be amazed by it. I knew my next-door neighbour in Portmarnock had an old beat up acoustic, so after school, I used to call in there and borrow it for an hour but I hated giving it back. So that Christmas I finally convinced my parents to buy me my own acoustic, a second, hand Yamaha acoustic. That is the first guitar I ever owned."

"I have never thrown a guitar out, as each guitar will define a period for you. So this is beat up to hell, it's gone through secondary school with me, through college, I scratched my initials into it somewhere when I got it first so I’d always know it was mine. It has just had the shit kicked out of it but it is still a beautiful Yamaha guitar and I really love it. It is probably my most treasured possession. So that is the guitar I taught myself to play on really."

"Would I use it to write on now? Not really, I am pretty much all electric now but I would practice things on it. I still use it a lot, not a day goes by that I do not pick it up and play it." 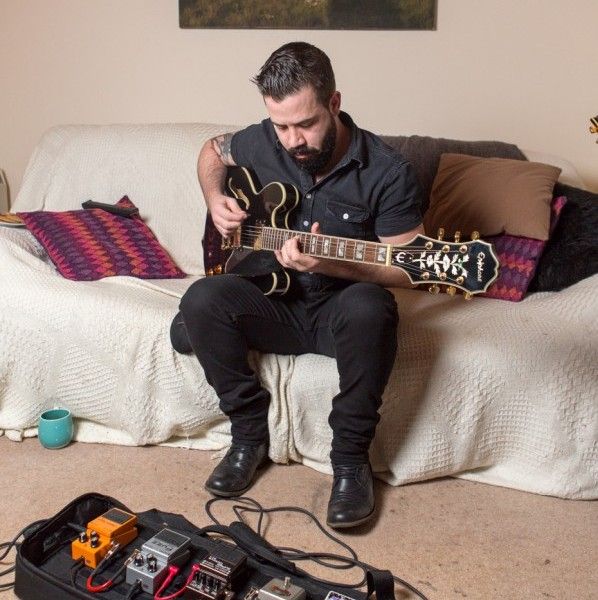 "New Valley Wolves in the grand scheme of things is still pretty new. We got together in August 2012; we had our first gig in January 2013. When we got together there was no decision that first day “This is what kind of band we’re gonna be”. I think I’ve always had a pretty distinct style of playing guitar, I’m not really a solo kind of guy I’m all rhythm. I’ve always been that way. We weren’t trying to play acoustic or anything like that it was all hard rock."

"We wrote a lot of songs after getting together, in the first 2 months and we recorded two of them Fire in the Blood and Athens, straight away. Because we nailed them so early on we just kind of felt like we’d found our sound already, we didn’t have to think about it, that was our sound."

"I think we’ve got a good sense of what our sound is, that’s helpful. We come up with riffs and think, “That’s good but it’s not us.” We don’t really develop it because we can tell when we’re playing it’s good, we like it but it wouldn’t be a New Valley Wolves tune."

"We’re really hard rock, aggressive, even though we’re playing really hard songs, It’s got real rhythm in it that there’s always people dancing even though we’re playing a really hard song, thumping drums and really fast guitar but people can still dance to it because of that rhythm and that’s reflected in Baz’s playing as well. I think there are a bit of… not pop sensibilities but there’s definitely accessibility in the way we put songs together because that’s the way I construct songs."

"We got compared to Metallica in some review the other week, which I found really funny." 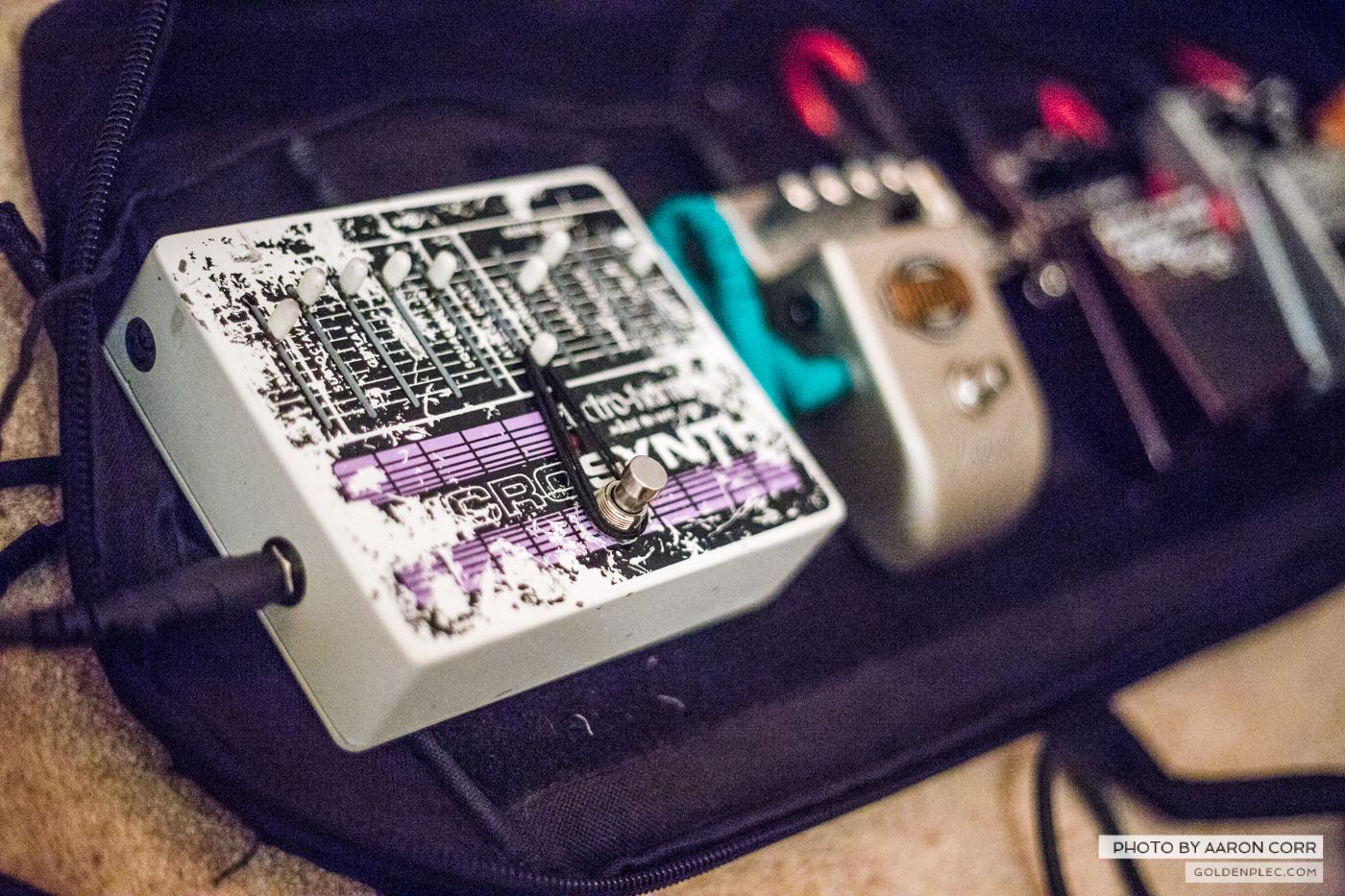 "It’s pretty cave man stuff. When you’re using big heavy pedals like these bastards here (Boss DS-1 &amp; Fuzz FZ-5) you really need a noise suppressor. The Electro Synth is just a massive sounding, industrial, really hard sounding pedal. If you turn that on it’s an instant game changer, it defined our song Fire in the Blood. That song did a lot for us, it put us on a lot of radars so that’s all that pedal and I use it for other songs as well. Then we got the Marshall Reflector. I really love reverb, I love mixing a lot of gain with a lot of reverb especially because we’re a two-piece. It just gives you a big cavernous sound once you hit the reverb, everything just fills out beautifully, especially if you can balance that right with a lot of gain you end up with something special. I think that would define my guitar sound really, shit loads of gain and a lot of reverb blended together."

"Then we’ve got the Boss Super Octave OC3, a great octave pedal, I love that one. Once I got the Octave, it took over a while and I forgot all about the Micro Synth. It’s just a big, fat, chunky sound and people would think that’s real harder, for metal but as I use a lot of single string chord progressions I can get a real kind of dance beats out of it almost. Then the straight up, good old-fashioned fuzz pedal and distortion. I’d say a lot of people have one of these orange guys in their setup, the DS-1 classic distortion. In terms of combinations I’d definitely use the Octave and the Micro Synth the most and if in the middle of a song I’m going into a bridge or a breakaway from the verse/chorus, something different, I’ll hit the reverb and it can really define the little breakaway moments as it just opens everything up so much. It’s a great little pedal." 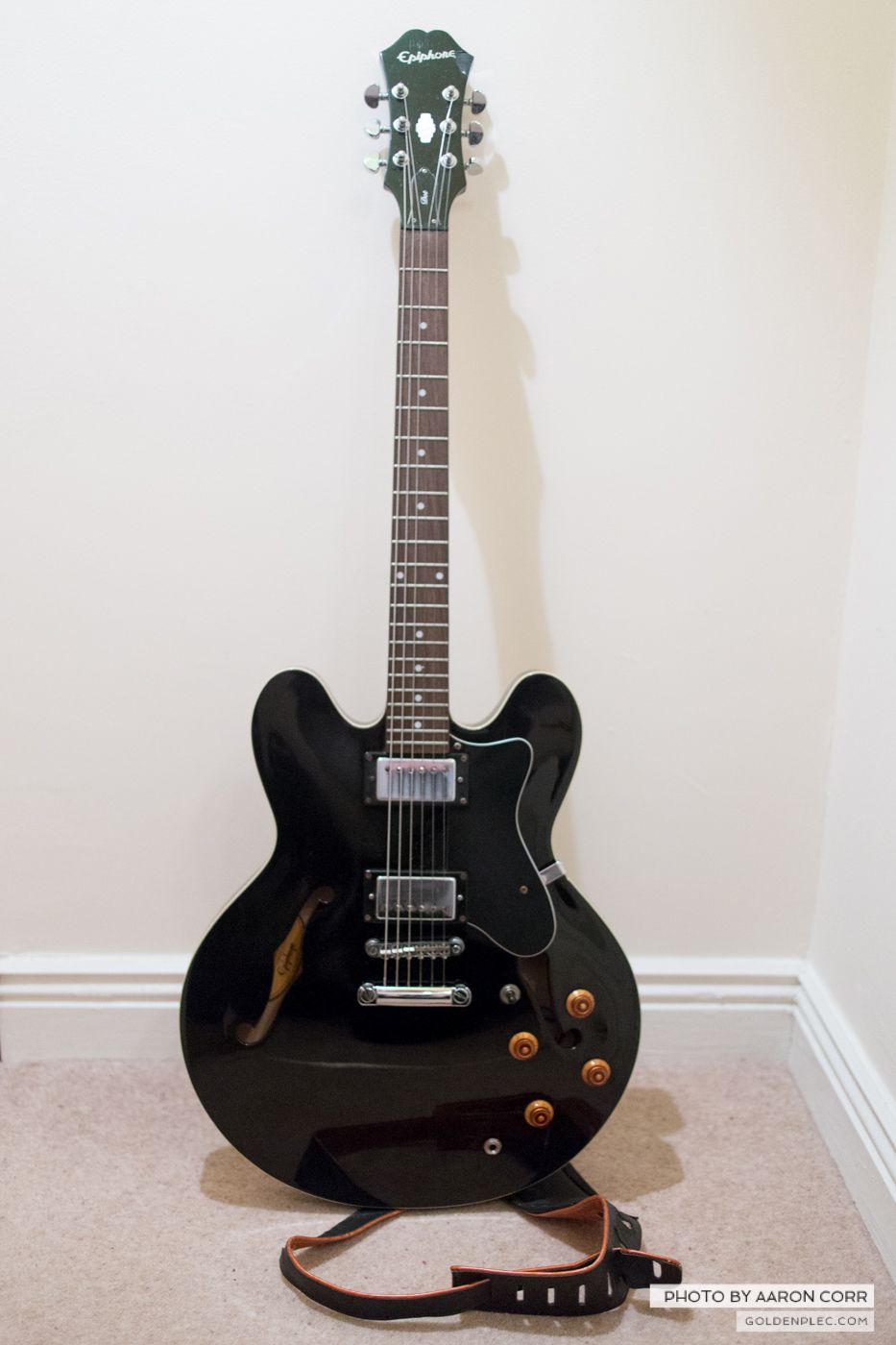 "The Phoenix Jazzmaster, I think it might be a Japanese guitar. I bought it second hand. They don’t make them anymore. It’s a beautiful guitar. I love hollow body guitars, I always play with a lot of gain and pumping that into one of these, it just comes alive and you’ve to really tackle it to keep control of it. I bought it in my first job out of college with the first paycheck, second hand from some guy in Dublin. It’s beautiful, I love it, the shape and the physicality of it, I’d do all the bluesy stuff when practicing on it. It’s not one I play live with an awful lot because it is unpredictable, if you were to put that in live with the Octave it would be very hard to control. I’ve not yet used it for recording but we’ve still got some of the album to finish off so it’ll probably get a look in before the end."

"I’ve two Epiphones; the one I got first was the Epiphone Dot. This is the first proper electric guitar I ever loved and owned. I got it while I was in college down in Cork, in UCC about seven or eight years ago. It’s just a gorgeous, solid, semi-hollow body guitar. It’s been beat up, had the shit kicked out of it, the jacks broke countless times and I’ve had to fix this, it’s just really been around the block but it’s just a great guitar. I’ve written a lot of songs I love on this; it’s something I’d never part with."

"Up until this year, it was my primary guitar until I upgraded and got the Sheraton-II. It’s like the better, older brother of the Dot, the pickups are better, everything on it is just better condition, it costs a little bit more, the quality, the sound is better on it. This is my baby now; this is the one I use now for gigs. The Dot is my backup but I’ll always have a place for that, you feel bad if you use one guitar, more than the other does."

"We used to have a normal open E tuning but those songs have been dropped from the set, it was only a while ago where I realized “whoa, I don’t have to tune down or tune up anymore” because everything is in drop D now. I’m at home in that tuning.

"The bass is my latest edition to my collection but it’s not on the record, my girlfriend got it for my birthday. I’m dying to write a tune on that and play it live, especially with Death From Above 1979 just after releasing a new album. Their first album they released about ten years ago was when I got really interested in the bass. I went to see Royal Blood in the Workman’s when they played ages ago and it’s great to see a fellow two-piece nailing it. It’s an easy thing to compare but people do say “you sound like Royal Blood” but you know, it’s a compliment but you could argue we’re nothing like them, so I just take it as a compliment because they’re an awesome band." 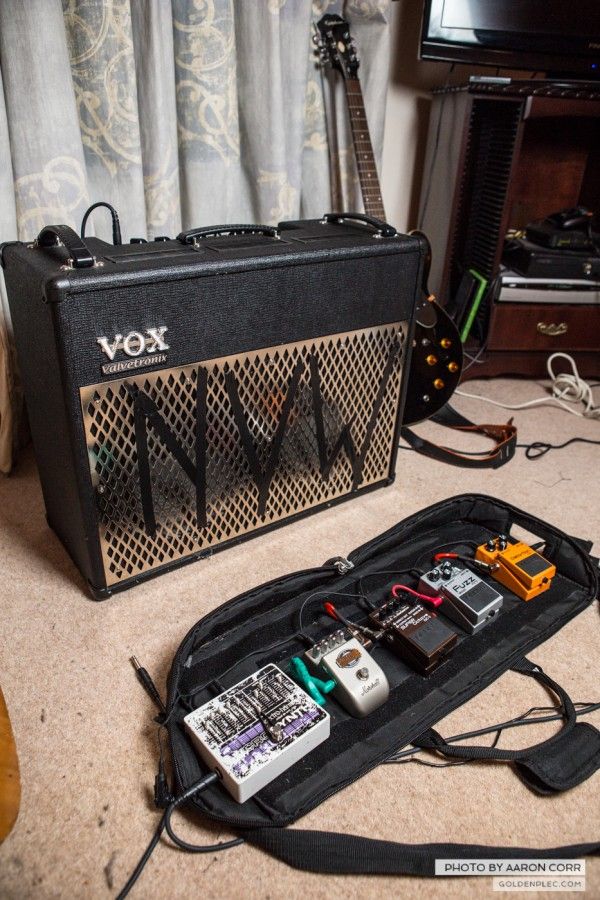 "The Vox AD100VT, it’s a fucking brilliant amp, I love Vox, they’re my favourite brand of amp. I’ve had three main gigging amps in my lifetime. I started off with my first amp back in school that was a tiny Marshall that died after a year."

"Then I got a Boogie amp, which I don't even know if that was a proper brand at the time. I had that for a decade. I knew it inside out so I could get the exact sound I wanted out of it. You'd be playing these gigs in these decent venues where they'd have these big Marshall stacks and I'd say, "No, I just want to use my Boogie" because I know exactly what I'd get out of it. That died on me in the middle of a gig in UCC before we were about to play our last two songs. "

"It's been the Vox ever since. It's great because it's got all these different amplifier settings; I usually stick to US High Gain with a lot of gain, a lot of treble and not so much bass or middle. When I'm recording and layering up I'll play just with gain on the amp and then I'll play with just the Synth pedal on, just the Octave on and just the Reverb on and that's how I layer it up."

"We actually finished recording our last full track with Johnny Doyle in JD Production studios in Cavan, last Sunday. It was a great day; there’s a couple more little bits, little instrumental bits and in between pieces left to do but we’re hopefully gonna get them done before Christmas, then we need to spend a week or so mixing it, getting everything just right and we’re hoping to release it as early as we can next year."