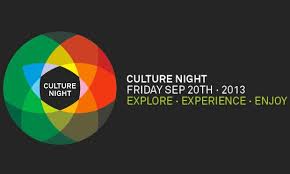 Culture Night 2014 will take place from 4.30pm-11pm across various artistic platforms throughout Dublin on 19 September.

The bandstand of St Stephen’s Green will see the children of RTE? Co?r na nÓg open the night’s festivities. A Hansel and Gretel Music Trail can then be followed down Grafton Street and over to the square in Temple Bar. For lovers of the Russian Romantics, the National Concert Hall presents Tchaikovsky’s first piano concerto, and Rimsky-Korsakov’s Scheherazade.

The programme also includes the world premiere of Linda Buckley’s Beloved on the Earth, which will be performed by the RTÉ Philharmonic Choir. Alternatively, the Contemporary Music Centre will host an evening of exciting new music and conversation with leading contemporary composers and performers, interspersed by live electronic sets in the Centre’s outdoor courtyard. St Mary’s Pro Cathedral performs Vespers with The Boys of the Palestrina Choir followed by sung Mass, and a concert of sacred music.

Throughout the evening, RTÉ Radio 1’s Arena will be on hand to present a three hour live programme of interviews, music, drama and comedy, accompanied by the RTÉ Concert Orchestra.