We are a 7-piece, live hip-hop band from Dublin. The line up is myself (Dennis Cassidy) on drums, Darragh O’Kelly – keys, Harry Phipps – turntables, Shane Latimer – guitar/bass/synths, Bill Blackmore – trumpet/electronics with emcees Raven and Jamel on vocals.

// How did the band get together?

“Mixtapes was started back in 2006. The band had already been performing pretty regularly for a number of years as an instrumental outfit under the guise of Redsquare, doing long extended sets of improvised jazz/krautrock/noise at house parties and art spaces around the city. We gradually started to pare back the sound and ended up playing more funk and breakbeat based material, which was got me thinking about trying a slightly different format with the band and put together a live hip hop project, inviting local emcees to perform with us.

With the addition of Harry our DJ, the line up was complete. We met the super-talented MC Ophelia through our first show back in ’06 and were her band for a number of years before she went to Cork to study music and our current wordsmiths are the killer dynamic duo of Raven and Jamel, who were part of a regular crew that used to come to our shows.”

// With so many musical influences, how do you sift through and find a direction to take a track in?

“Live, pretty much all of our material is improvised or based on improvisations from a previous gig or rehearsal. Sometimes we don’t rehearse at all and might just sketch some ideas out in sound check.

We’re all full time musicians in the band and our tastes are quite broad, so it can start out as anything from a straight hip hop beat with nasty distorted keys and scratches and develop into a weird electro Afro-beat tune with a bit of a drum ‘n bass flavour or vice-versa. We usually know within a minute or two if something works or not.

In the studio it’s pretty much the same idea, but when we find something that really feels good, we have the luxury of running it until it sounds tight and then recording it down. When we’re happy with that idea, we’ll move on to the next one.

We don’t really think how any particular track is going to sound beforehand. We just feel it out and see how it goes. If we’re not into it then we won’t use it.”

// You often have special guests perform with you. Who would be your dream collaboration?

“We talked about this a couple of years ago and we pretty much all agreed on Roots Manuva. His stuff is quite dark and dubby with a good dash of grime and glitchiness to it, so he’d definitely get what we’re about.”

// Who would you most like to send you a Mixtape?

“Sadly he’s gone now, but without a doubt it would have to be Dilla. One of my own personal heroes and a huge influence on what I do musically.”

// Who are your favourite Irish artists at the moment?

“Rusango Family are absolutely killing it right now. Big fans of Girlband and Bitch Falcon too.”

// The last text message you sent is your next album title. What is it?

// What plans are afoot for the band over the next while?

// Send us a photo and explain… 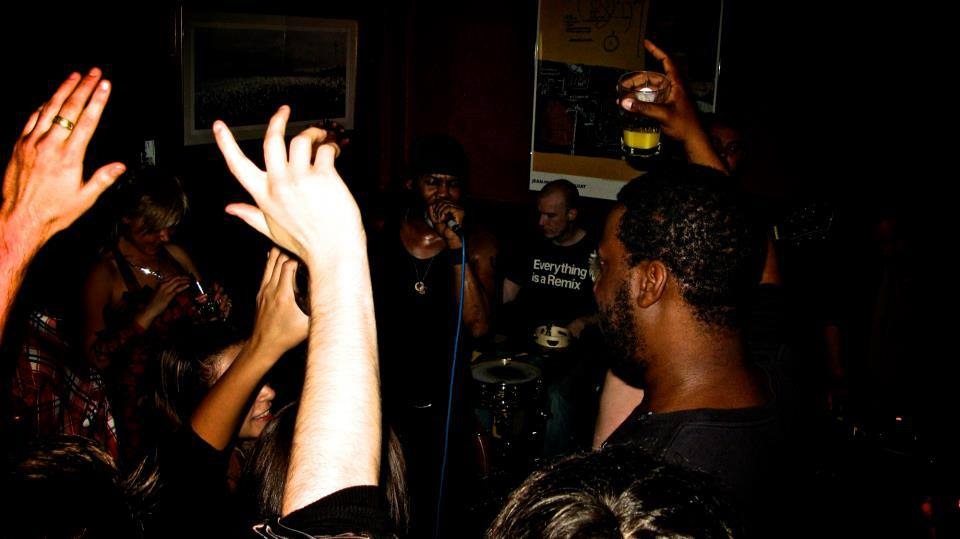 This photo was taken at our opening slot for jazz/hip-hop pianist Robert Glasper in the main bar of the Workman’s Club back in 2011. (That’s the back of his head there checking us out. Lovely fella)

It pretty much sums up how we like our shows to go down. Loud and sweaty with the crowd right in on top of us.

// You can only hear one song for the rest of your life – what is it?

// The one song that you always bust out at a house party?

Hmmm….Either Ride Like the Wind by Christopher Cross or What A Fool Believes by The Doobie Brothers. Both undisputed Yacht Rock classics and essential house party joints.

Mixtapes From The Underground play our ‘GoldenPlec & Claire Beck Presents…’ night at The Workmans on 25th February.
8pm // €5
Check out all the info here.

Well, come and join us