Every year, the GoldenPlec community of writers & photographers (50+) come together to choose their ones to watch for the upcoming year. After counting the votes, we select our 'Plec Picks' for 2021. Now in its 8th year of publication, we have classical artists alongside rap, neo-soul, bedroom pop and everything in between. Our list strives to encompass a broad spectrum of music in order to highlight the thriving music scene that exists in Ireland.

Another of the Nigerian diaspora to make their name in Ireland’s hip-hop scene, Evans Junior is exuberant, yet focused.

2019’s eclectic debut, ‘Organised Mess’ set out Junior’s stall, fusing a variety of styles and moods and catapulted the twenty-one-year-old to some of the island’s biggest stages. 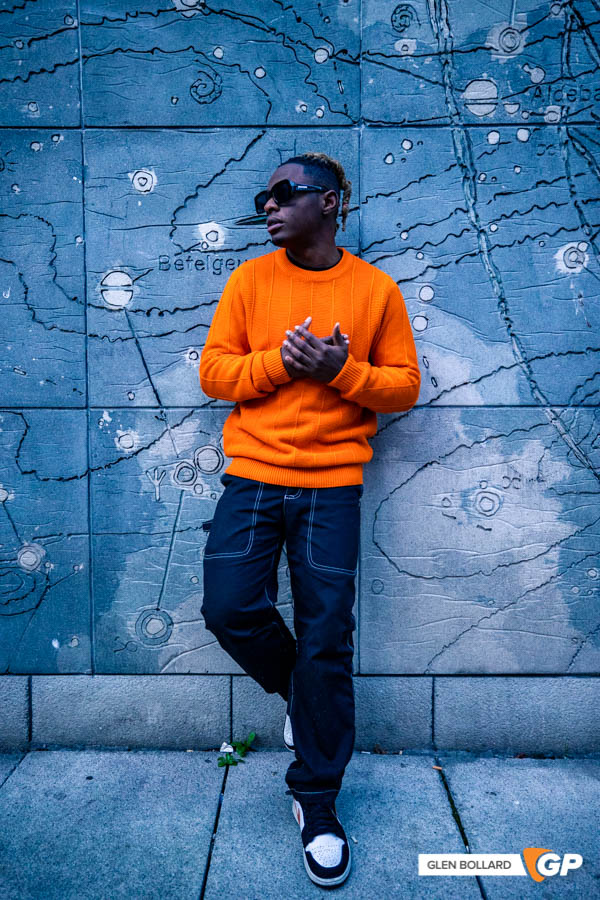 A sort of anthology of all his influences – from churchgoing to nightlife to his father – with ‘Organised Mess’, Evans Junior aimed high but how did he manage to deliver such a coherent piece of work?

“We decided to put trap on the first side and afrobeat and RnB on the second part of the album. That decision was made three days before the album dropped funnily enough.”

“If we drop half of it and then give it a two-week gap and let those songs marinate then drop the next half while there’s still some of a buzz…”.

Despite spending most of his life in the midlands, Evans Junior reveals, “I was always surrounded by music. My Dad’s really into 50 Cent, afrobeat as well. I grew up with a very well-trained palette. I could listen to genres open-mindedly”.

The Longford man received much of his practical musical training through his parish choral activities during his early teens.

“There’s a large setup with drums, piano, bass guitar and then there’s a choir. I originally didn’t want to join the choir because it was full of girls and boys didn’t really join the choir”.

“My Dad bought me a piano. He kind of forced me to do it, it was an ego thing. ‘my son plays piano for the church’”, he says laughing.

“I’m very thankful for that down the line because after that I picked up the guitar and the drums, so it was like a domino effect”.

"I grew up with a very well-trained palette. I could listen to genres open-mindedly”

In fact, this religious upbringing even seeped into the album. “If you listen to the first song on the album (Intro), it is the epitome of me growing up in church. It embodies that whole feel. I really wanted it to be something meaningful and conscious”.

You assume Loyle Carner was trying to achieve the same vibe with The Isle of Arran. It wasn’t long until Evans Junior was old enough to move to Dublin full time. And soon after turning twenty, he founded a clubnight.

“Onyx launched last November. Our last event was in March. It’s an official business now which I take really great pride in. Our goal for Onyx is to be international (they were already in London earlier in the year).”

While Evans Junior prizes having such a close-knit group to rely on for Onyx, he has a larger support network which he also cherishes dearly. We discuss one particular excursion to Belfast where JyellowL was supporting The Game at Ulster Hall.

“We’d just made this song so he invited us over to perform it for the first time and get a few clips for the video as well”.

“Jordan [Adetunji] lives up in Belfast. There’s very good chemistry between the three of us. Music-wise, Jordan and I are on the same wavelength. JyellowL is more conscious rap”.

“We’re all on the same level, we all have the same goals. It’s really encouraging to have people like that alongside you”.

Isolation is something we have all had to contend with of course, particularly those in creative sectors. We wondered how the hip-hop community had supported one another during this troublesome time.

“It’s been harder to push music this year because it’s easier for people to support you if they have some sort of connection with you”.

“I’ll always be at shows. Even if I’m not performing, I’m supporting someone that’s performing so people see me and I get to network a lot. That obviously couldn’t happen this year,” says Evans Junior, before adding, “when it comes to hip-hop, the Irish community are always supportive. If the music is good, people will support you regardless.”

As for whether they can build some momentum in 2021, Evans Junior explains, “the hip-hop scene is growing. I don’t think we’re at our max potential”.

“People like putting everyone into the same bucket but realistically not everybody makes the same style of hip-hop music. There are sub-genres of hip-hop in Ireland”.

“Some people are doing better in some areas but I think it’s unfair to compare everybody that makes hip-hop. I will say next year you will be seeing a lot from the urban scene”.

This year was a bit of a watershed moment in that respect. Tyler, the Creator slammed the term, ‘urban’ but Evans Junior doesn’t seem to see a problem with it.

“Obviously America’s completely different but when it comes to Ireland, I feel like it’s OK in the sense that it is what it is – we are the urban scene. I actually take pride in that because it gives us space from everybody else. We don’t have to compete against that”.

While squabbling is prevalent within the scene, Evans Junior et al. are united in their desire to push Irish hip hop to new heights. This is reflected in Evans Junior’s goal to curate a stage specifically catered for Irish artists at Longitude, where he appeared for the first time last year.

“When it comes to big shows like Longitude, MCD have always shown me love. MCD’s given me a lot of opportunities – opening for some really big artists”.

“The only thing I will say is Longitude’s long overdue a stage for Irish artists, somewhere that is really prominent. That’s my only criticism”.

“They’re giving a lot of Irish artists a lot of opportunities, on the main stage as well which they don’t have to do”.

“[‘2FM Live: The History of Hip Hop’] was definitely a step in the right direction but most people who come to Longitude are under 18. That Heineken stage is a drinking stage so that’s kind of limiting – The younger crowd are the crowd that are going to stick with you in my opinion.”

Evans Junior would strike you as the ideal fit to take the reigns of any subsequent projects.

On how his music and club involvement bounce off each other, Evans Junior informs us, “I like having a good time. My music is a reflection of who I am”.

This extends to when he’s on stage. “I really love performing. Any time I’m making a song, I always think, ‘I’m trying to make something that people can sing along to’. When I’m writing a song, I’m aiming for it to be played at clubs or on the radio”.

“I’d say that comes from my experiences of going out in Dublin, seeing how people take on certain songs and the energies that they get off listening to those songs. All that comes together in my music, definitely”.

After the year that’s been, it would be remiss not to mention the ongoing crisis in Nigeria. Evans Junior is slightly more defiant, however.

“It’s nothing new. The government has always been corrupt. 2020 was just the year of awakening so people are finally having their voice heard. They’re not having it anymore. Change is happening. Revolution is happening”.

Evans Junior is a dreamer. Quizzed with who he’d love to collaborate with given the chance, in Ireland? “Aby Coulibaly, Gaff, Wendy Godfrey”. From the rest of the world, meanwhile? “Davido, Burna Boy, WizKid”.

There’s no question that Evans Junior represents the new guard, however. An era where duality is celebrated, not questioned.

He’s shocked at how few releases he put out this year (five to be exact).

Expect more to come from Evans Junior as he looks to match gargantuan ambitions with gargantuan output.

Every year, the GoldenPlec community of writers & photographers (50+) come together to choose their ones to watch for the upcoming year. After counting the votes, we select our 'Plec Picks' for 2021. Now in its 8th year of publication, we have classical artists alongside rap, neo-soul, bedroom pop and everything in between. Our list strives to encompass a broad spectrum of music in order to highlight the thriving music scene that exists in Ireland.