Finding the edge of danger in opera

Australian-born opera director Cameron Menzies took over as artistic director and CEO of Northern Ireland Opera in the midst of lockdown, at the end of 2020. Finally able to arrive in Belfast early last year, Menzies successfully mounted a new production of Puccini’s La Bohème—a site-specific staging at Carlisle Memorial Church in Belfast’s north inner city—that September, followed by an acclaimed season of Sondheim’s Into The Woods at the Lyric Theatre in February 2022.

Now in his second year in the post, Cameron Menzies is preparing a new production of Verdi’s La Traviata, set to reopen the recently-refurbished Belfast Grand Opera House in September. 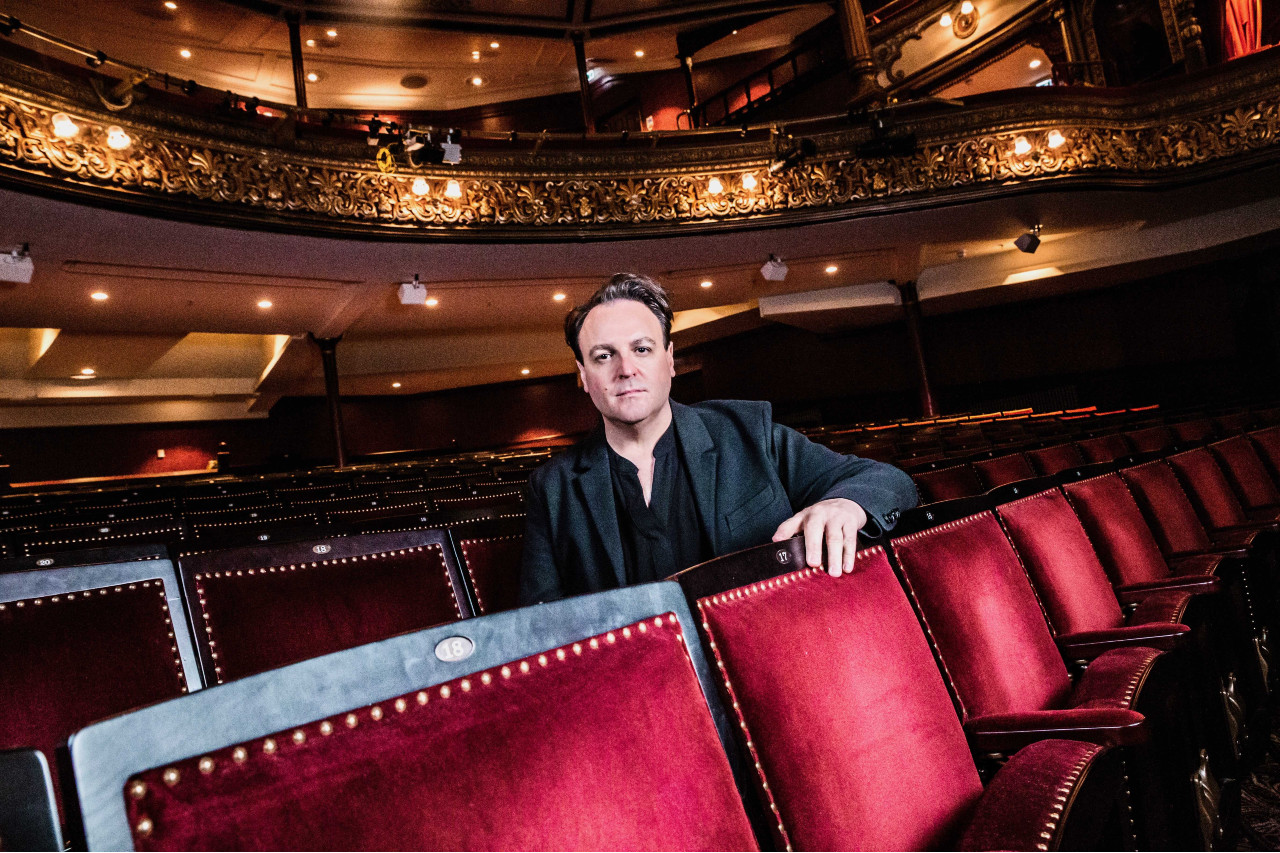 “I don’t think opera is as foreign as people think it is. There is an innate history of singing and story-telling through music in this country and I think that’s so exciting.”

We caught up with him on a brief visit to Dublin. It’s a good chance to get to know where he started… “I trained in theatre as an actor first – I went to an amazing theatre, called the Ensemble Theatre in Sydney. About 17, I was looking for things to do, auditioned, and they took me on…”.

After this, singing beckoned, and he went to the Victorian College of the Arts in Melbourne to train for opera as a counter-tenor. “I graduated there, and was singing for different companies—and then I had a day when I had this picture in my head, that I really wanted to make these things that I was a part of, and so left singing, pretty much, that day—and decided to direct.”

Nevertheless, as head of NI Opera, stage directing now runs alongside a very public role, which—after years of being a freelancer—he clearly enjoys: “I had always wanted to run an opera company, and Belfast has a great music scene… it’s a good city.”

Aspects of Northern Irish society could seem daunting to some outsiders, but Cameron is taking an easy-going approach—“it’s interesting, I feel like I’m allowed to fly above it in some ways, because it’s certainly not my history, although I’m very sensitive towards it. It doesn’t seem to enter into my working life… apart from not having a government at the moment!”

Was the decision to use the derelict Carlisle Memorial Church—abandoned during the 1980s due to its location between opposing communities—for last year’s production of La Bohème a conscious choice?

“It was and it wasn’t… it’s such a beautiful church, but also I was told that no-one really goes to that part of the city. We only had about 500 tickets to sell across the whole season, yet we sold out, and it ignited this thing in that church, and it has brought life back to it. I’d love to see it turn into a lovely little arts centre of its own, there’s a lot of people booking it now—I think we’ve shown Belfast maybe what it could be.”

How was it as a venue for the production—and to be performing live in 2021? “At that stage I was adamant we had to get something live on, as safely as we could, and so we built a whole theatre in the church. The acoustic was stunning, and it was just right for that time, that little moment we were in. It was very emotional, that first night.”

This was one of the first shows to open after the first lockdown—it can’t have been easy.

“We had people—myself included—who hadn’t done a live show since everything had hit. Everyone brought that joy to work, but also a vulnerability—that we’d do a show, and then wait to see how everyone went with tests. We got one show on, and then we sat and waited for the next show, and we did get all four. People were just so determined to make it work. And the response was great, audiences loved it. For my debut in Belfast it was quite wonderful to have to think so far out of the box.”

But it will be exciting to be in Belfast’s Grand Opera House for this next season… “It will be absolutely beautiful. If people haven’t been there, it’s when you shut your eyes and you think what an opera theatre should be—that’s what it is. We had a little bit of a sing in there the other day, and it sounds like it’s going to be stunning.”

Looking ahead to developing a new production of Verdi’s La Traviata—a story of mid-19th century Paris that crosses social divides—Cameron reflects on the different elements that go into the rehearsal process, with the story itself, its different contexts, the characters’ individual journeys, and—especially—working with the singers themselves.

“It’s about finding a singer who knows who they are, that’s important for me. You can do whatever conceptually around it you like, but I think the truth and the external pressures on those characters, which are societal and financial and so on, all those things have to push really hard on those people, and that’s not even setting it in a certain period, I think those pressures are universal. Even the pressure of disease now is completely at the fore…”

I’m all for burning the cakes in the rehearsal room, because then you know. That’s when you find where the edge of danger is,

The other constant, irrespective of production concept, is of course the music. “What I love is that the music in this piece helps us so much. The music is such a blueprint, especially in Traviata: it tells you what is happening at any one time, and also that you have to trust it. Opera starts, singing starts, when speech is not enough.”

We pick out a key moment in the first act of La Traviata, the pause before Violetta (the female lead), finally alone, launches into the big solo scene. How does the singer—or director—approach a moment like that in rehearsal?

“The conductor and the production hand it over to that woman for that moment. Because once she starts, she’s on and she has to keep going. I think those moments are really brave and I think they’re the moments that in rehearsal you have to absolutely mess up—I’m all for burning the cakes in the rehearsal room, because then you know. That’s when you find where the edge of danger is, and where you find that moment of how long is too long. I think it’ll probably be different every night.”

Singing Violetta in this production is Australian soprano Siobhan Stagg, making her debut in the role. “Siobhan is an amazing artist and an amazing actress, she’s been singing all over the world, and brings a huge intelligence.” Cameron sees the working relationship between director and artist as a creative dialogue, one that he clearly relishes. “In this opera there’s a different ‘soprano’ at the end of the night than what starts, and what we need to do together is work out dramatically why and how those sounds change.

“There will be a lot of discussion about pace and how we emotionally get her there and pull that around and shape that. That’s what I love doing, I love being on the rehearsal floor and working with singers. It’s about jumping off and sort of freefalling safely, but finding what we all bring, and also finding where the conflict is. I work a lot on that with singers, asking ‘why are those characters not meeting?’ To work on a piece like Traviata is extraordinary.”

Another important aspect of La Traviata is the role of the chorus, collectively creating the public world in which the story is set. The development of the NI Opera Chorus for this production has started early, so that when rehearsals begin they won’t be meeting for the first time.

“We’ve been working with 24 amazing local singers, and putting them through a whole development programme, dancing and language and music and lots of different things, because we’ve had so little opportunity to get a chorus on stage, and people haven’t worked together for a long time. For me, it was a chance to get them working as a group of singers and a group of artists.”

Building potential and working with local talent is something he takes very seriously. “There’s a lot of great artists in Northern Ireland, unfortunately we can’t do eight operas a year, that’s not what we’re financially able to do. Every opportunity we can give them needs to be invaluable to them. We’ve real quality—just a thirst to get on and to do it properly and to the best of everyone’s ability. I’m very lucky.”

Beyond this is the task of reaching out to audiences and the public at large, and to look to develop opera into the future. “I don’t think opera is as foreign as people think it is. There is an innate history of singing and story-telling through music in this country and I think that’s so exciting.”